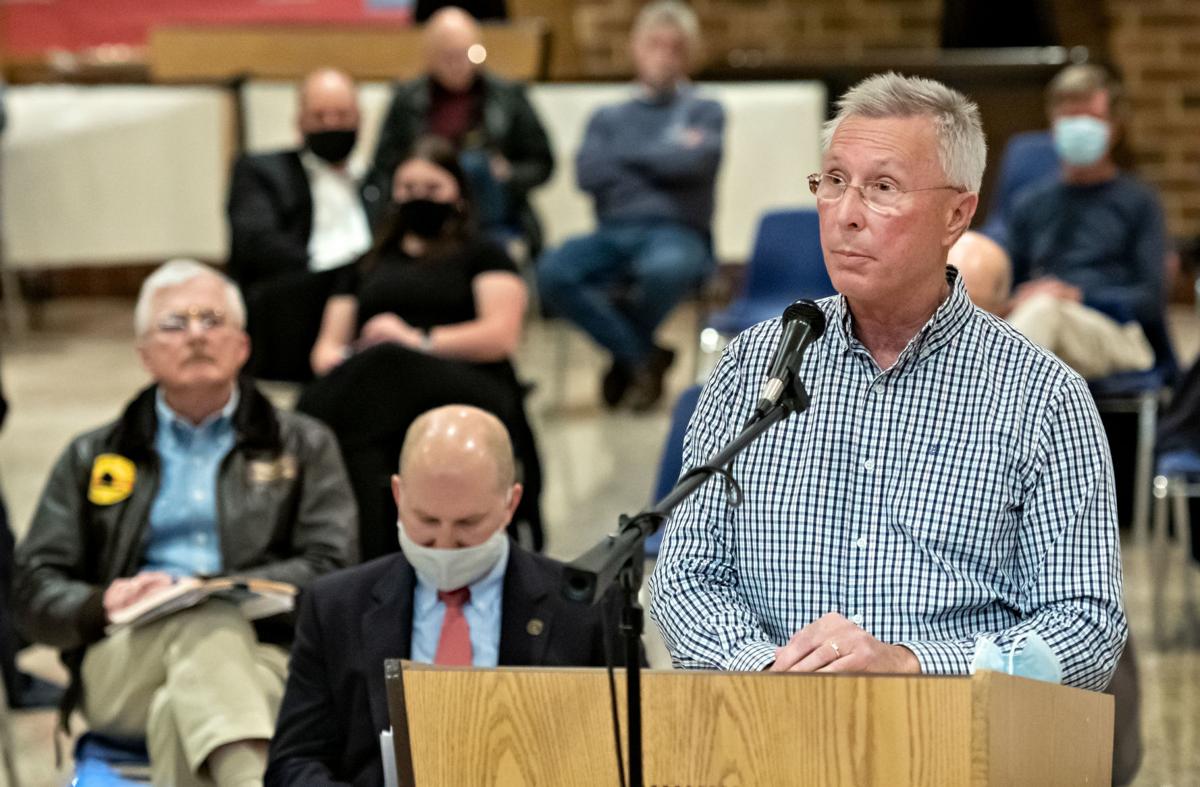 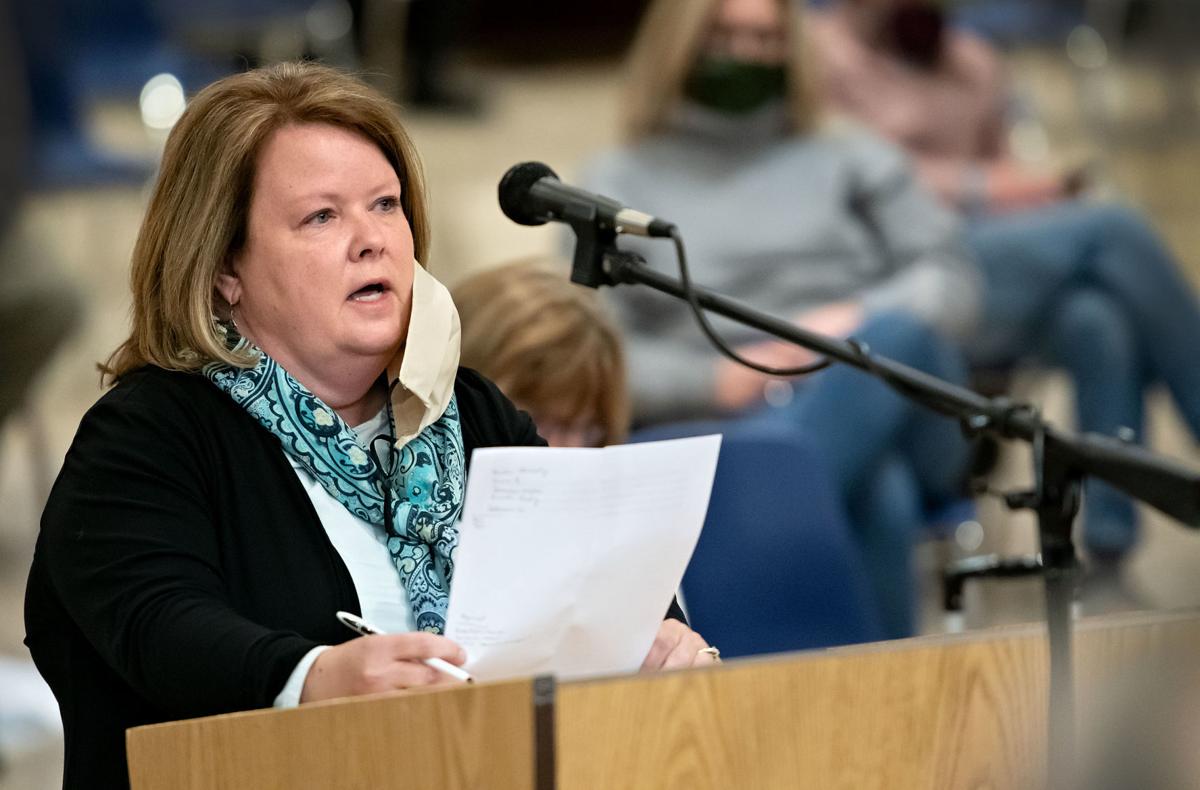 School Board member Cyndy Walsh addresses the Board of Supervisors. 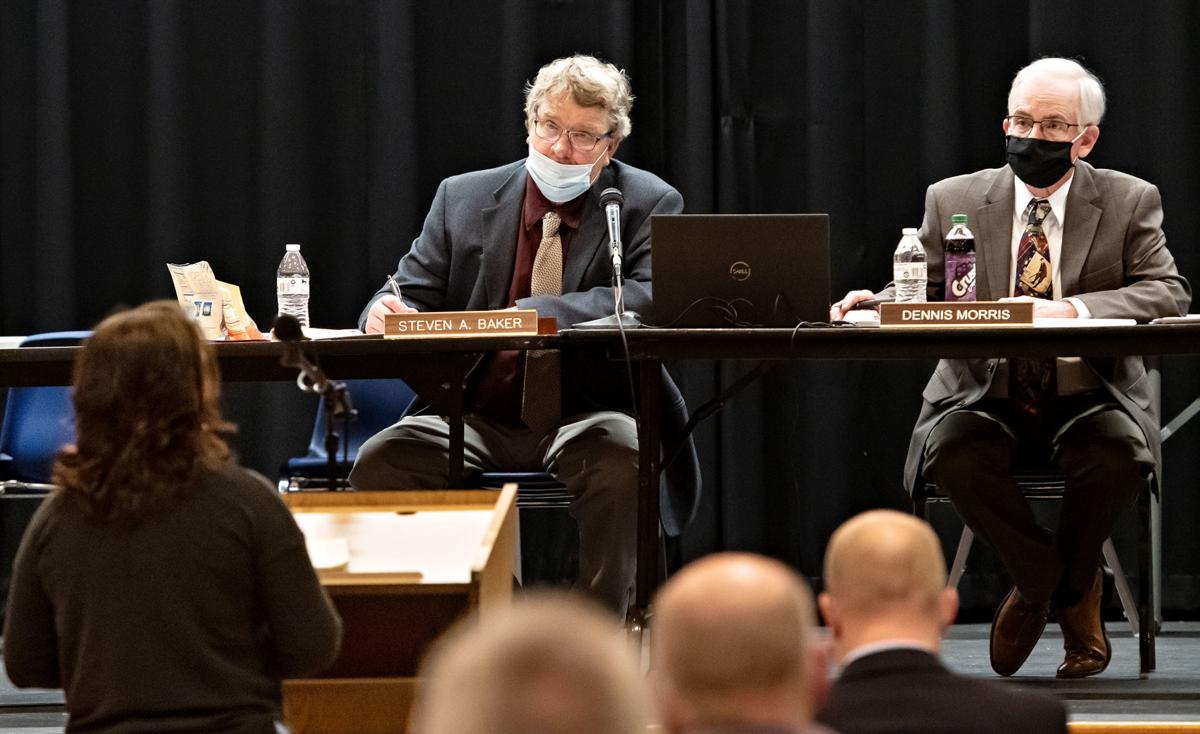 Shenandoah County Board of Supervisors Chairman Steve Baker, left, and Dennis Morris, right, listen to a speaker on Thursday night during the budget hearing. 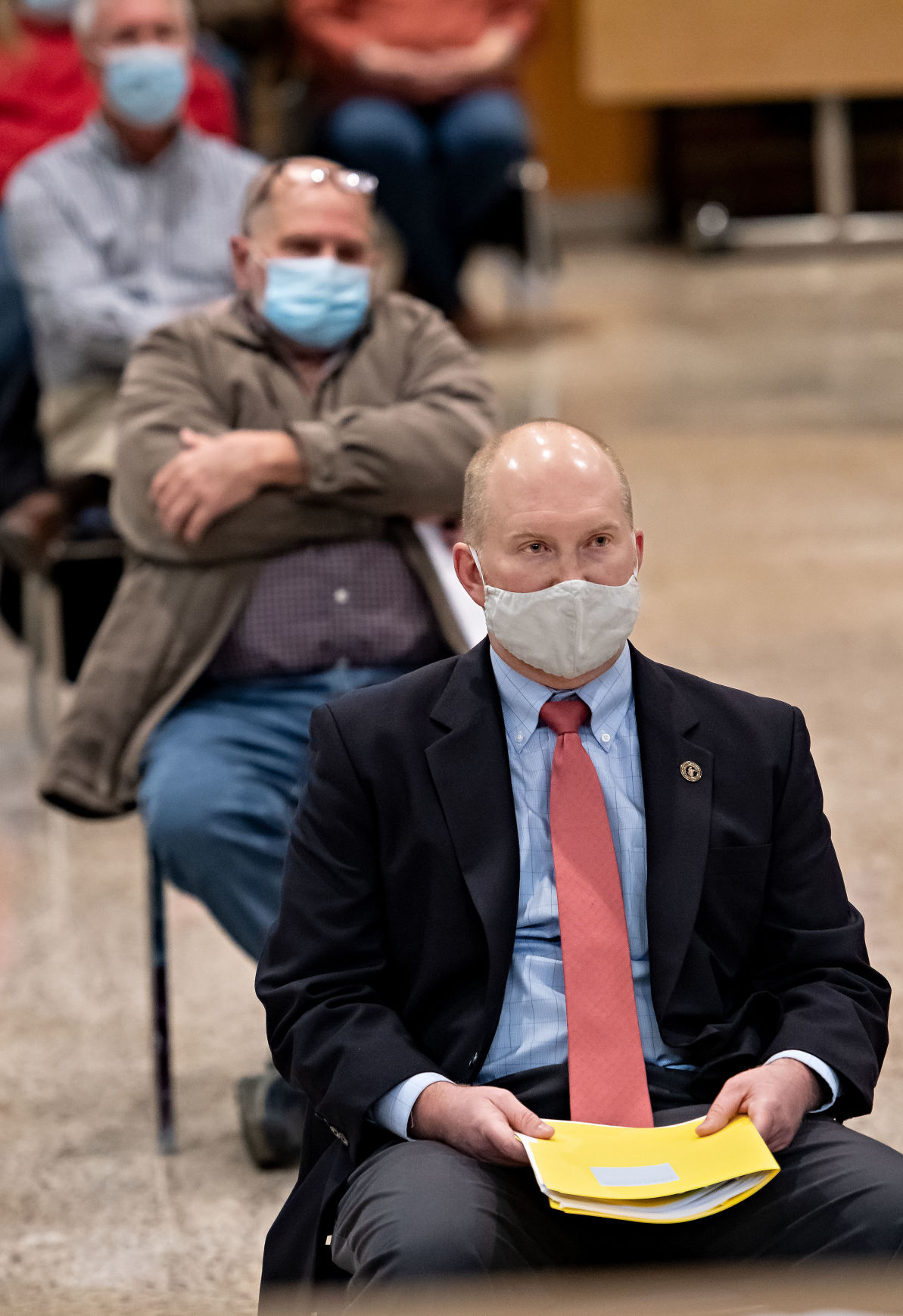 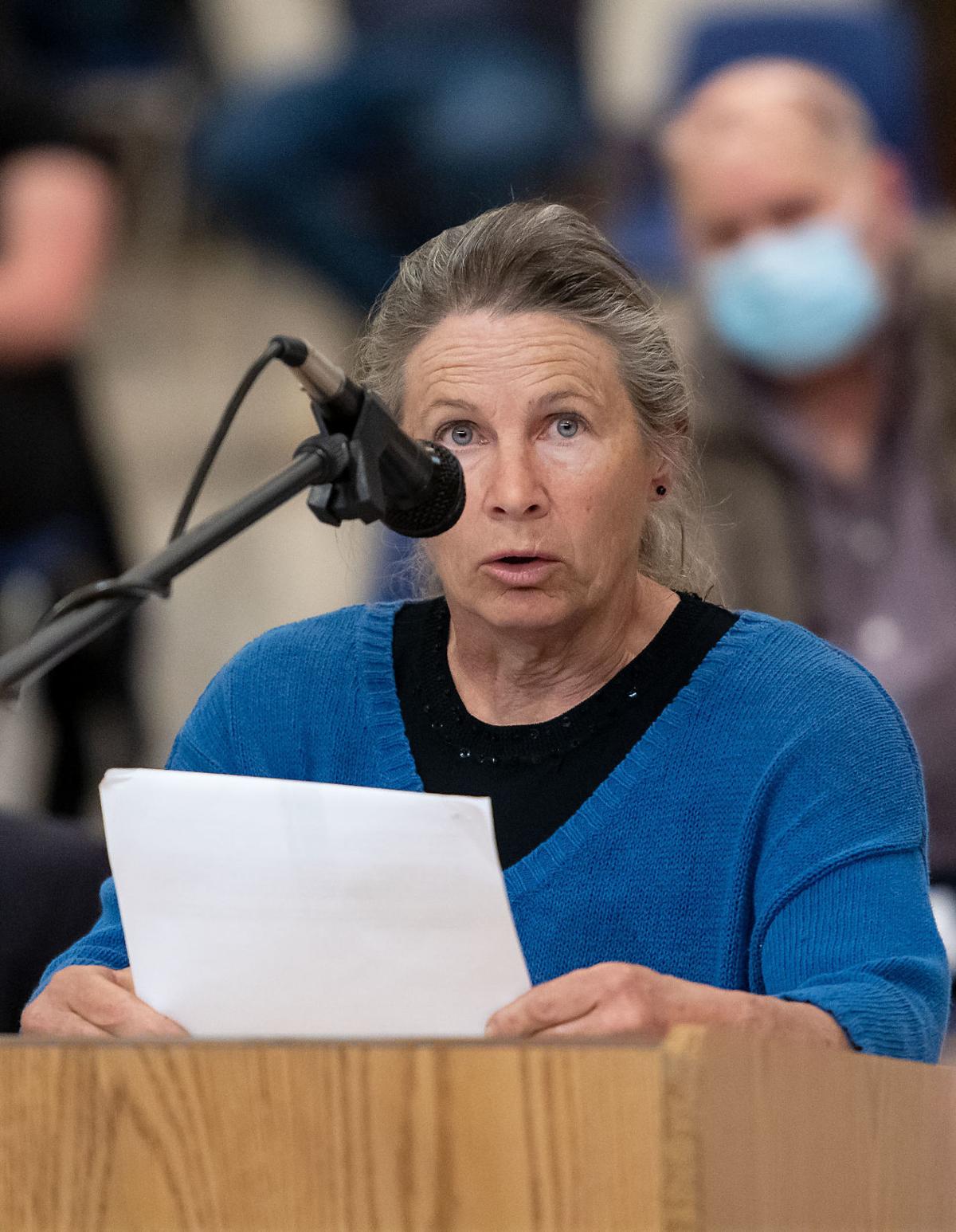 Karen Kwiatkowski addresses the board during the budget hearing. 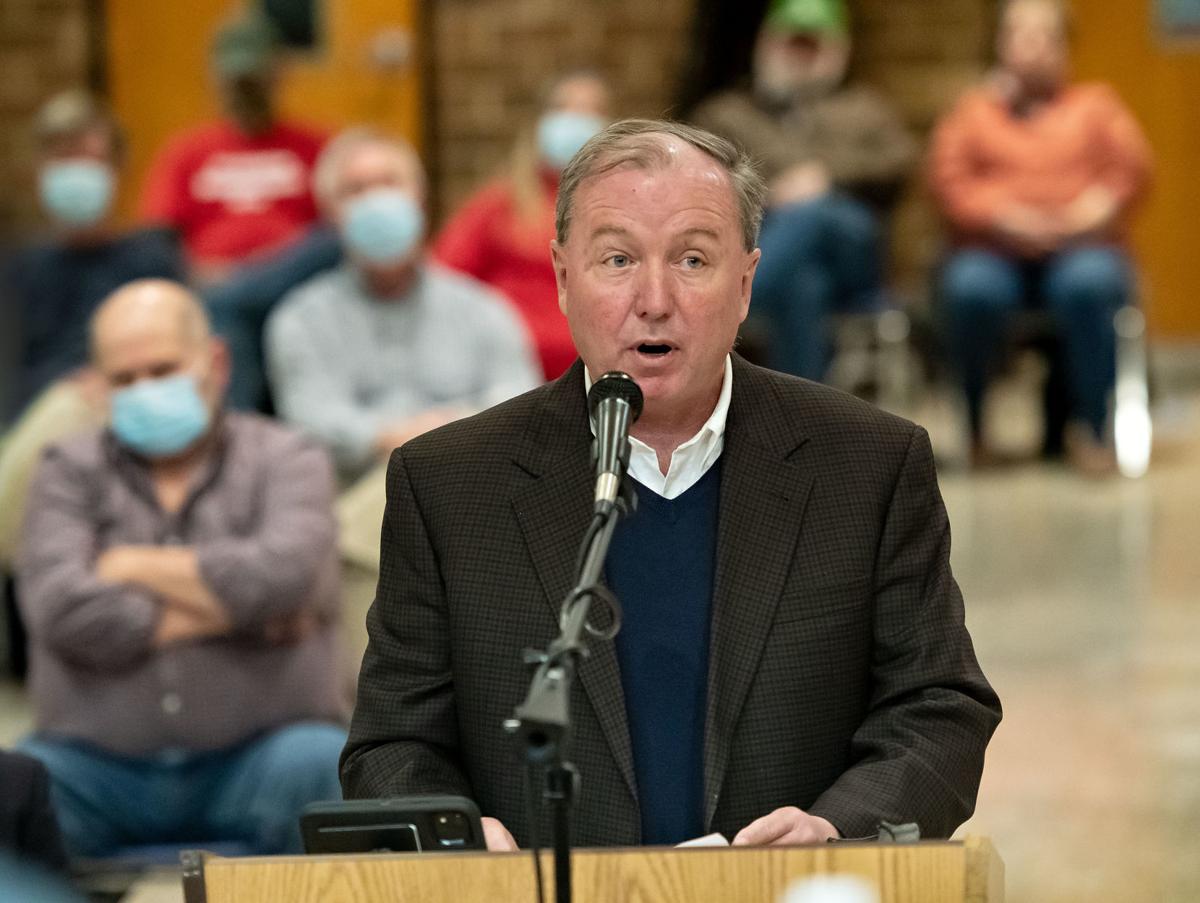 School Board member Cyndy Walsh addresses the Board of Supervisors.

Shenandoah County Board of Supervisors Chairman Steve Baker, left, and Dennis Morris, right, listen to a speaker on Thursday night during the budget hearing.

Karen Kwiatkowski addresses the board during the budget hearing.

The Shenandoah County Board of Supervisors fielded public comments regarding the proposed 2022 fiscal year budget during a public hearing on Thursday night, many of them coming from teachers who spoke out against proposed cuts to school funding.

Fifty-seven individuals spoke in person or virtually or had their submitted comments read aloud during the public hearing, which took place at Peter Muhlenberg Middle School in Woodstock and lasted over 2 ½ hours.

Supervisors’ proposed $28 million allocation for Shenandoah County Public Schools’ operating budget – nearly $2.5 million less than what the county provided the school division in operating funds last year and over $3.5 million less than the school division’s request for fiscal year 2022 – was the dominant topic, generating mixed reactions from citizens – many of them teachers and School Board members – who spoke at the meeting.

Many of the comments touched on the School Board’s controversial decision to rename schools on the southern end of the county that bear the names of Confederate military officers, for which the School Board recently reallocated over $300,000 to pay for out of its current budget. Some supervisors have claimed during county budget discussions in recent weeks that their constituents desire lesser school funding in response to what they deem financial mismanagement by school division leaders.

School Board Chair Cyndy Walsh referenced on Thursday comments made by District 3 Supervisor Brad Pollack – who has been a vocal opponent of the name changes – during a recent work session in which he suggested the county allocate only $20 million to the school division and that he’d be willing to be more “generous” with school funding if the School Board backed off its decision.

“I don’t accept that,” Walsh said during Thursday’s public hearing. “You either have the revenue to level-fund the schools or you don’t. You either have the ability to find a way to (provide) level funding, or you don’t. It should not be an if-then proposition. A lot has been said about the vast majority of constituents that feel the School Board should be punished in some way, but I question that term and would remind you that the silent majority counts on its elected leaders to make the best-informed decisions on their behalf. It’s OK for your board to disagree with my board. It’s OK that we disagree professionally, but students and staff in Shenandoah County should not be the ones that suffer in such a disagreement.”

Four other members of the six-person School Board – Karen Whetzel, Shelby Kline, Marty Helsley and Michelle Manning – spoke or had comments read aloud during the public hearing. Most of them called the school division’s budget “needs-based” and warned that lesser local funding could force cuts to extracurricular activities, arts and career and technical education programs and staffing, an exodus of teachers due to non-competitive salaries and the ineligibility for state and federal funding, including money from the newest stimulus bill that they said has a maintenance-of-effort requirement.

Walsh said if the school division doesn’t receive “at least full funding” for the upcoming year, “we stand to potentially lose access to over $9 million in federal funding.”

Jeff Rudy, president of the Shenandoah County Education Association, said that the supervisors’ “myopic view” of the school division is “hurting our children.”

“Without full funding, the budget cuts across the curriculum, across the grade levels and across the extracurriculars will devastate our students from the elementary school classrooms all the way through the halls of the high schools,” Rudy said, warning supervisors that the “ripple effects of your decisions tonight will have generational harm to our children in Shenandoah County for years to come.”

Connie Fravel, a longtime county teacher, said she was “appalled” that some supervisors seem to be attempting to “punish or penalize” the School Board, adding that teachers and students had no part in the name-change decision and that cutting school funding “hurts people who had no voice or choice in that decision.”

“How fair is that?” Fravel asked.

Other commenters noted the importance of a well-funded educational system, with county resident Seth Coffman stating that “well-funded, high-performing schools” are the “foundation of a thriving community.”

Helsley, who was the School Board’s lone dissenting vote on the school name changes and on the school division’s proposed fiscal year 2022 budget, said at Thursday’s public hearing that “we need to start forgiving people in this county.”

“Whether it’s a name change, reducing funding, we need to start forgiving,” he said. “And I’m one that will speak even though I didn’t vote for the budget, I’m speaking for the 5,800 students that the School Board represents, the 1,100 staff members – teachers, paraprofessionals, administrators, bus drivers, cafeteria workers and the like.

“The most important thing I want to emphasize to you,” Helsley added, “the new superintendent candidate is listening to this meeting and I will assure you we will get a CEO that will be transparent, will be respectful to everyone and I know my board members will agree, we want a new person in here that will lead the Shenandoah County Public Schools.”

Though opponents to proposed decreases in school funding outnumbered those who favored them on Thursday night, supervisors did hear from a fair share of residents who supported the proposed cuts.

Keven Walker, a New Market resident who said he was speaking on behalf of the Coalition for Better Schools, said that while school name changes were the “800-pound gorilla in the room,” that decision isn’t why the coalition was formed or why the people it represents are asking for the county to allocate the school division “no more than” $24 million.

The name changes are, however, Walker said, the reason why “a light was shone onto the operations of the schools that has pulled back a veil that has exposed mismanagement, misappropriation of funds and issue after issue that has brought severe and direct concern by many in this county over just who’s running this county, both at the School Board and on the Board of Supervisors.”

Brett Jones, of Quicksburg, wrote that the School Board and Superintendent Mark Johnston, who will retire after the school year, had “demonstrated a preference for operating in an underhanded manner” and that they have “also refused to consider the wishes of this constituency, suppressed dissent on controversial matters” and “doggedly” pushed the notion that “schools on the southern campus should be renamed using the tax dollars of a constituency that overwhelmingly opposes such changes.”

“You will hear this evening that our children will suffer if these cuts are made,” Jones wrote. “Some will say that efforts to defund the School Board are sinister. I’d submit that cutting the School Board’s budget is fiscally responsible. We should not reward disastrous stewardship of money by throwing more money at a board that has demonstrated an inability to listen to its constituents and an inability to handle money.”

Rick Koontz, a former School Board member, said that while Johnston and the School Board are presenting a “very bleak outlook” if the division’s funding request is not met, his experience has shown him that you can “make do with the funds that are allocated to you.” Koontz further added that the perception is that the school division has “extra money built into the budget” if it can reallocate $300,000 for name changes.

Karen Kwiatkowski said the School Board “forced school name changes without public referendums and repeatedly misled the community about how they would pay for these changes” rather than focusing on improving student performance in the classroom.

Ros Poplar too noted the school division’s need for better classroom performance, stating that “we place special trust” in the School Board and in educators to “equip our children to succeed in life and maximize their potential.”

“It is apparent this has not happened this past year as changing the names of our schools and mascots, which was not even in this year’s budget, has nothing to do with education and preparing our children for the challenges of life ahead,” Poplar said.

“I urge you to hold the School Board accountable,” he added, “and be responsive to our students and the citizens of Shenandoah County and a budget that funds education and not political agendas.”

Though not nearly as popular a topic as school funding, a handful of residents spoke on Thursday against a proposed 5-cent increase in the real estate tax rate meant to help fund the new Sheriff’s Office headquarters and new public safety radio system.

Board of Supervisors Chairman Steve Baker closed the public hearing by assuring those in attendance and listening online that “we will pull together and we will make it through this.”