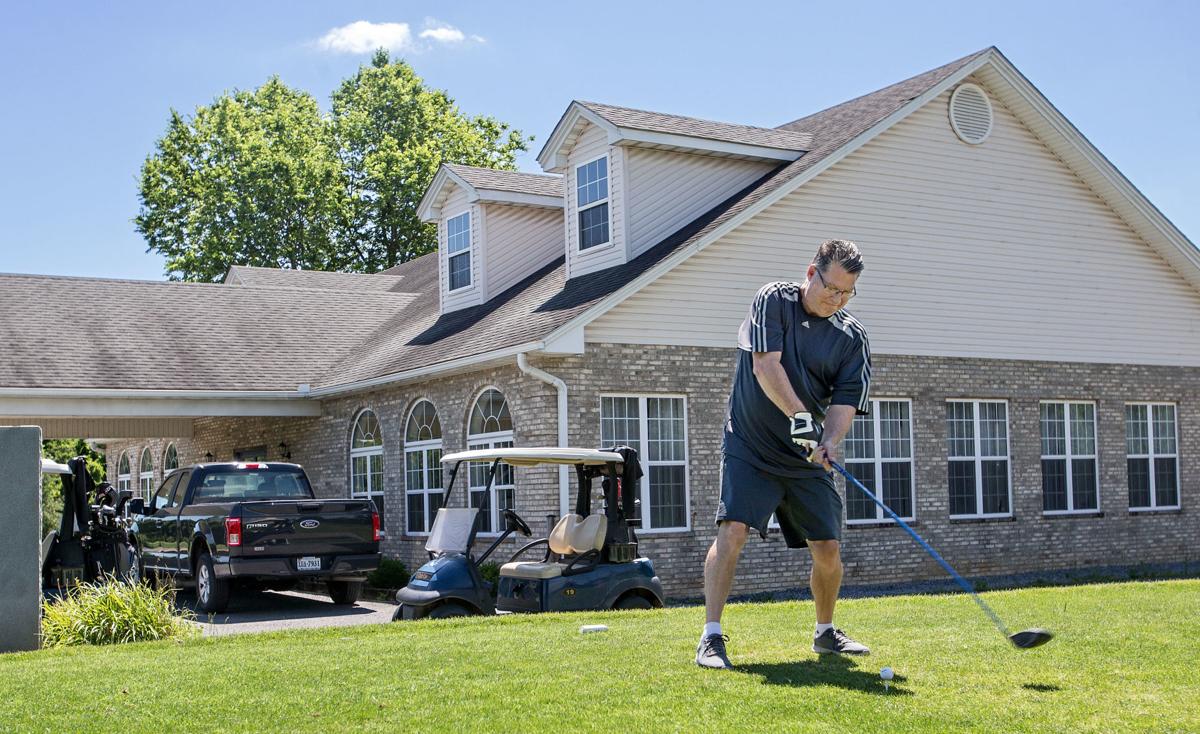 Mark Bartee, of Winchester, tees off outside of the Front Royal Country Club on Wednesday morning. The Warren County Board of Supervisors has voted to close the facility. 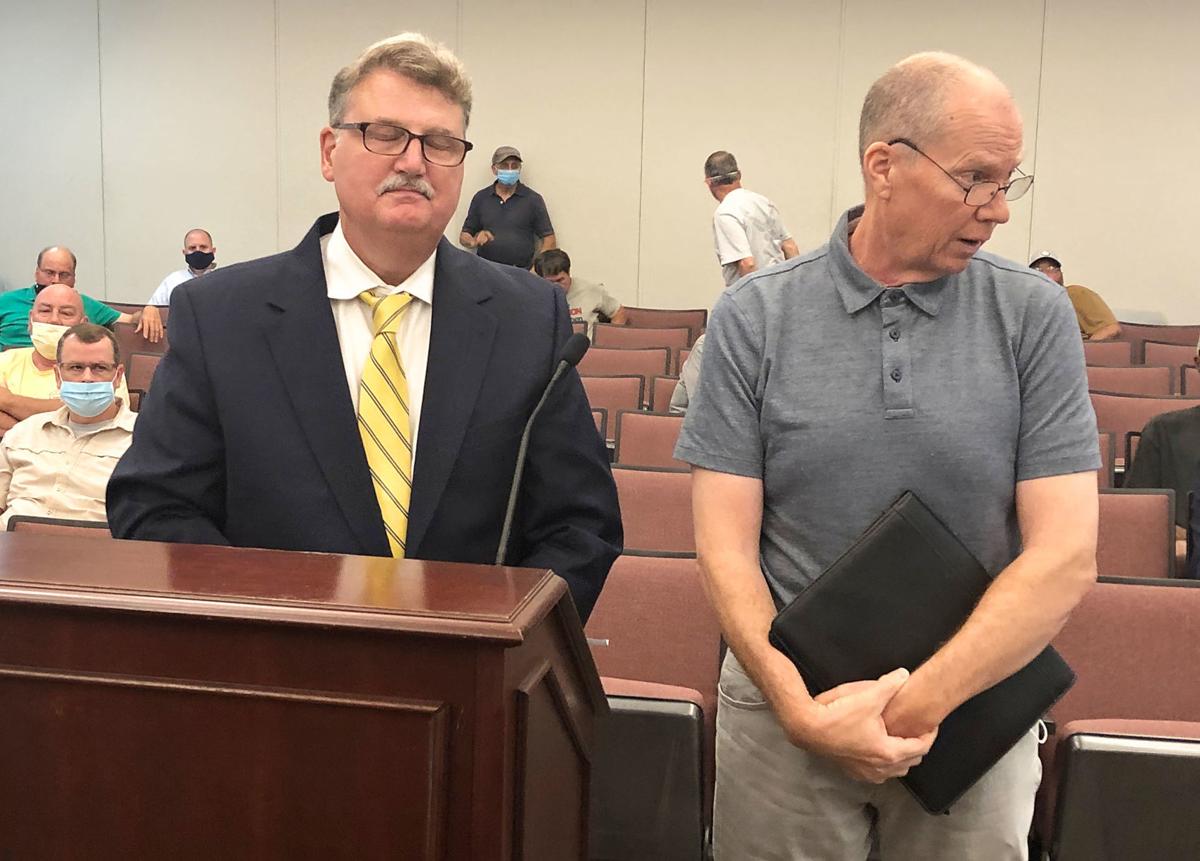 Co-owners of Virginia Golf Louis Nicholls, left, and Ray Nash speak to the Board of Supervisors about keeping the Front Royal Golf Club open.

Mark Bartee, of Winchester, tees off outside of the Front Royal Country Club on Wednesday morning. The Warren County Board of Supervisors has voted to close the facility.

Co-owners of Virginia Golf Louis Nicholls, left, and Ray Nash speak to the Board of Supervisors about keeping the Front Royal Golf Club open.

The supervisors previously opted to cease funding the course, which has lost $100,000-plus for several years, on July 1. On Tuesday, the supervisors ended hope for the 82-year-old course’s continued life by declining an offer from Virginia Golf LLC to assume management in a $1 lease agreement.

The lease was declined by a 5-1 vote with Supervisor Tony Carter being the lone board member supporting the course’s continued operations.

County Administrator Doug Stanley noted that the county has one year remaining on a $20,000 annual golf cart lease, which the county must pay. Had the course been leased, Virginia Golf would have paid that $20,000.

Additionally, the supervisors’ agenda notes that Parks and Recreation staff estimates annual expenditures of $38,927 for the facility’s basic maintenance after July 1. That does not include any revenue from boating memberships at the boat ramp and rentals of the clubhouse’s banquet hall.

Had the course been leased, the company sought annual county assistance of $10,000 for utilities and up to $10,000 for equipment repair for the first three years. Virginia Golf co-owner Louis Nicholls noted that assistance was not being requested in perpetuity and the company merely needed help getting through the first few years. He said that the banquet room rentals could be tripled, adding that he already has four pre-sales for the banquet room and one for a tournament.

“Do you know how much lost money has come through that place?” he asked.

To naysayers’ sentiments that the course cannot make money, Nicholls said he does not “mean to blow my own horn” but he was in the top 1% of sales for Marriott International.

“I think I have the skill set to fill that banquet hall,” he said.

Nicholls also relayed plans to install a location in the middle of the course in which tourism maps would be handed out with plans to help businesses county-wide. He said the company’s plan is a “holistic public-private partnership that’s way beyond golf.” For the owners, he said, “it’s really community service for us” and “it’s well beyond golf.”

Ray Nash, the course’s volunteer superintendent and Virginia Golf co-owner, agreed that it is about “community service,” and he had aims to train the next generation of golf course maintenance workers.

“I’ve got plenty of other work to do but this nine-hole course is my passion,” he said.

In voting against the lease, Supervisors Vice Chairman Cheryl Cullers said the government should not compete with private industries.

Cullers noted that golf was invented during the 15th century, and surely those golfers did not have “spectacular courses.” She pondered the possibility of mowing the course and allowing golfers to play freely.

Chairman Walter Mabe said he would like to see the company “have more skin in the game.”

During a public hearing, 16 citizens either spoke or submitted emails supporting the lease while an additional 15 people in the crowd who did not speak rose their hands in support of the course’s continued operations. Mabe also said he received two phone calls from citizens supporting Virginia Golf’s plan. Five speakers opposed the the lease during the public hearing.

Chris Lang noted during the public hearing that Virginia Golf has plenty of skin in the game with plans to invest $100,000 of personal funds and volunteering man hours. The supervisors’ decision, he said, is a “travesty.”

“Once this course is gone, it’s gone, it’s never coming back and it’s pretty sad,” he said.

Bob Miner said during the public hearing he was a member for 12 years and “everyone has fond memories of the course, what it has done for the families and their children.” He added that “anyone who I talk to that plays golf learned to play at that course.” By eliminating it, he said the supervisors are eliminating “good, clean fun,” which is a “travesty.”

Tyler Green said he previously could not afford golf but picked up the game five years ago after learning of the Front Royal Golf Club.

“I can’t go play golf at Bowling Green…They’d kick me off the course because I’d be moving too slow. But here….people help me out, they welcome you,” he said.

Now, he said, there will be nowhere for him to play and “I started playing five years for nothing because that’s where I want to end up playing.”

Alberto Medina agreed with Cullers, saying government should not compete with private companies. Among his other concerns, he cited Virginia Golf’s unproven track record.

Come July 1, Stanley explained the clubhouse will close and employees will stop working. Next, he said the county will formulate a modified maintenance plan.

Come October, the county will be in court with heirs of the William and Agnes Carson, who donated the land for public use in 1938 with a deed mandating it be used for recreational purposes including golf. The heirs are claiming the county leased the land and never received true ownership. Had Virginia Golf been granted the lease, its contract would have protected against any negative impacts that lawsuit may have had on the company’s plans.

The boat landing near the golf course and associated boating memberships will be maintained by the Department of Parks and Recreation, Stanley stated via email. The nearby trails will also remain open.