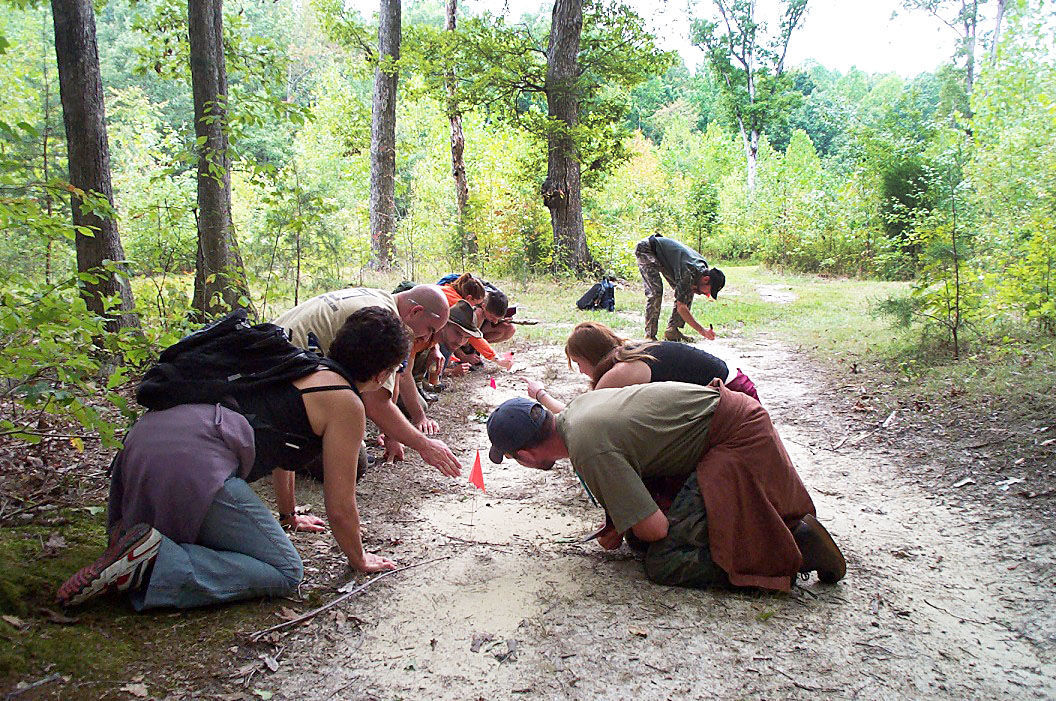 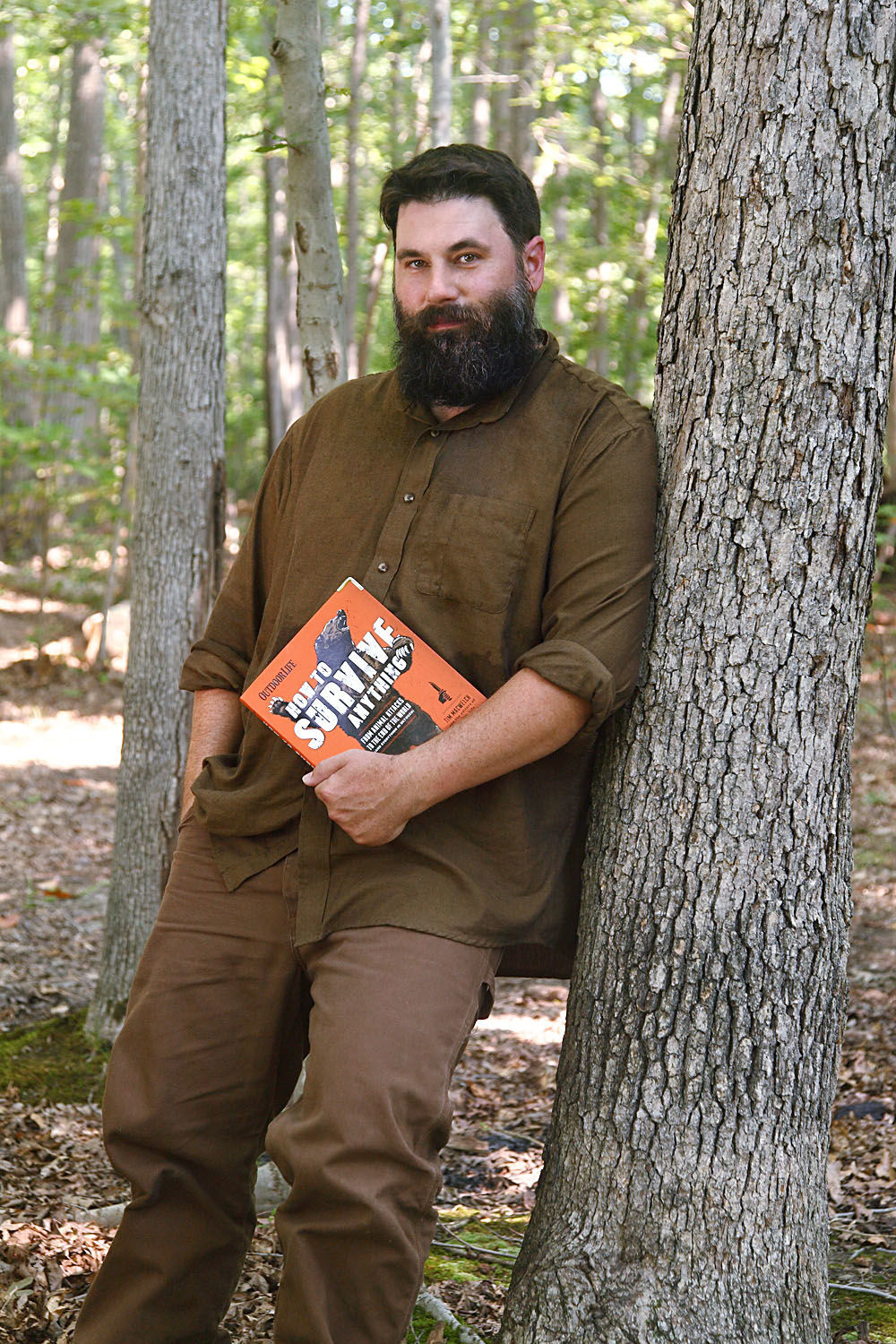 Tim MacWelch is a survival expert and author who runs the Advanced Survival Training outdoor school near Stafford.

Tim MacWelch is a survival expert and author who runs the Advanced Survival Training outdoor school near Stafford.

After almost 25 years of teaching survival skills to students of all ages, survival expert Tim MacWelch says it’s the everyday activities that are most likely to present a life or death moment.

These sorts of classes are great for those who want to be prepared for anything, he said. But emergency preparedness at home or on the road is what people are likely to face in their lifetime.

“A lot of folks don’t know how to live without AC,” he said. “That’s more valuable to the average modern person than breaking rocks or rubbing sticks together.”

Going into hurricane season, he said, “There’s no time like the present” to prepare for an emergency.

MacWelch, 47, heads the Advanced Survival Training outdoor school in Stafford and also partners with Sky Meadows State Park in Delaplane on programs that include Summer Wild Edible Plants, Fall Mountain Herbs and Introduction to the Backcountry.

Some of his classes at Sky Meadows are repeats of those he offers in Stafford, while others are specific to the topography of the state park.

“My goal is to help people become more survival savvy, more independent, more self-reliant and better prepared for the chance that something might go wrong,” he said.

“It really helps to build people’s confidence … and alleviate fears and worries.”

Residents of the Northern Shenandoah Valley could face any number of threats, depending on their day-to-day lives. Those who venture out on the Shenandoah River or go hiking in Shenandoah National Park or the George Washington National Forest might want to learn what to do if they get lost in the woods or fall and get injured.

Especially in the summer, when people spend more time outside in the sun and heat, he said planning ahead can save lives.

“Obviously people need to know what their limits are,” he said.

But while drinking plenty of water might be the solution to milder forms of dehydration, MacWelch said drinks that replenish electrolytes — such as Gatorade — will help in severe cases when a person is sweating profusely and is low on food.

Make sure the material is really thin, lightweight and a light color, he said, so it doesn’t absorb heat from the sun.

For those who travel a lot or commute a distance for work, carrying a first aid kit and other emergency supplies could be the difference between inconvenience and crisis.

Drivers should be prepared with food, water and other emergency items that they keep in the car or carry with them.

If keeping food and water in the car, MacWelch advises rotating it out often so it doesn’t sit too long in hot temperatures.

“[Heat] is really damaging to even really durable, shelf-stable food,” he said.

Granola bars will melt, he said, and bottled water will take on the flavor of its plastic container. It’s also good not to keep medication (prescribed or over the counter) in a hot car for more than a few weeks, he said.

Other useful items to keep in the car are jumper cables, basic tools, flares or signs to make a stranded car more visible to passing motorists, and a change of clothes and shoes in the case of having to walk somewhere.

“So many people drive home in business attire,” MacWelch said. Those who need to walk a ways for help will be more comfortable and less at risk of injury if they have good walking shoes and appropriate clothing.

“People also need to think about shelter in their car,” MacWelch said.

“The car itself can be a shelter,” he explained. But drivers should also prepare for scenarios in which that’s not enough.

In the summer, temperatures in a stranded car can rise above 100 degrees, and in the winter, the inside of a car could drop below freezing.

Prepare for any occasion by keeping a blanket or sleeping bag in the car, as well as warm clothes.

“In the hot weather, people may want to think about bringing the tarp,” said MacWelch. A tarp can either shield windows or be attached to the car and secured to the ground with ropes to provide shade outside.

“That way you’re not baking in a metal box in the sun,” he said.

Communication supplies are also a must.

“Every car should have a phone charger in it, at least for the driver’s phone,” said MacWelch.

Something as easy as a charged cellphone “could turn a disaster into just a minor inconvenience,” he said. “If you can call for help, then it’s not a major crisis.”

If that’s not the case, he said, “now you’re in a whole ’nother scenario — especially if no one knows where you are.”

That goes for whether you’re out for a drive or a hike.

“Someone responsible should know where you are,” he said. Leave information on where you’re going, which route you’re taking, which vehicle you’re driving, and when you plan to return.

“You need to have that as part of your plan,” he said.

Though he specializes in outdoor and wilderness survival, MacWelch said first aid and CPR skills are some of the best ways people can prepare themselves for the worst.

First aid training can provide someone with a range of skills from treating a wound so it doesn’t get infected to stopping severe bleeding long enough for paramedics to arrive on the scene.

CPR skills can help save someone who’s choking or has stopped breathing after a heart attack.

There are few skills more foundational to survival, MacWelch said.

And people, he said, “they die of the stupidest things.”

He recalled a friend of his who died after slipping while out on a hike and cutting himself on some broken glass.

“[First aid is] the most important survival training that anybody should take on,” he said.

“First aid skills are the skills that save lives.”

Though MacWelch has been teaching survival skills since 1995, he said he’s mostly self-taught and broke into the field because it interested him.

A longtime fan of camping, hiking and backpacking, he said it occurred to him that going out on his own, he could get hurt or lost if he didn’t have the right skills.

He started studying outdoor skills and found he was good at it, so he just taught himself what he wanted to know. Then he turned around and started teaching others.

He started with school groups and Scout troops in 1995, before adding in adult classes in 1997. He also writes articles for Outdoor Life Magazine and has written seven Outdoor Life-branded survival manuals.

Survival specialists are few and far between.

There are maybe 100 schools in the U.S. that anyone in the survival community has heard of, he said, “if you want to call it a community.”

In Northern Virginia, he doesn’t know of anyone else who offers the volume of programming that he does.

The North American Bushcraft School in Hedgesville, West Virginia, teaches summer campers about the tools and skills of Native Americans and also offers some summer courses on how to use garden herbs for various medicinal purposes. They also host four days of earth skills, music and community at the Mountain Craft Music Gathering at their 140-acre campus, from Sept. 6-9, with details at www.mountaincraft.org.

The Mountain Shepherd Adventure School in Catawba (Roanoke County) offers outdoor survival courses and team-building adventures, many of them geared toward women, according to its website, mountainshepherd.com.

“Their background is military, and so there’s a lot of that survival in their classes,” MacWelch said of the Mountain Shepherd school.

“Mine is more of a MacGyver style,” he said.

Referring to himself as “half survival hacks and half anthropology teacher,” MacWelch said, “We can make something out of nothing in a heartbeat.”