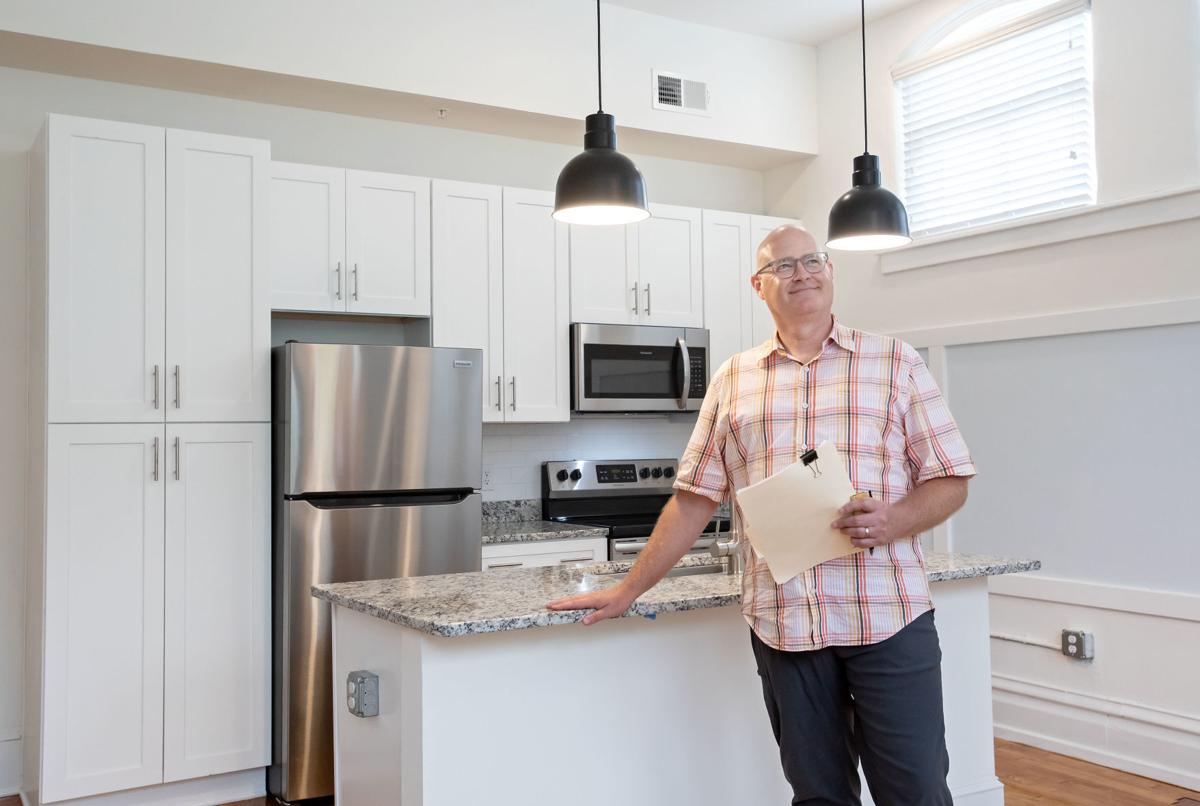 Edwin Gaskin, owner and developer of Echelon Resources, Inc., stands inside the kitchen of one of the 12 new upscale apartments inside Woodstock Lofts. Echelon Resources renovated the former Woodstock school building that the town once considered for its administrative offices. 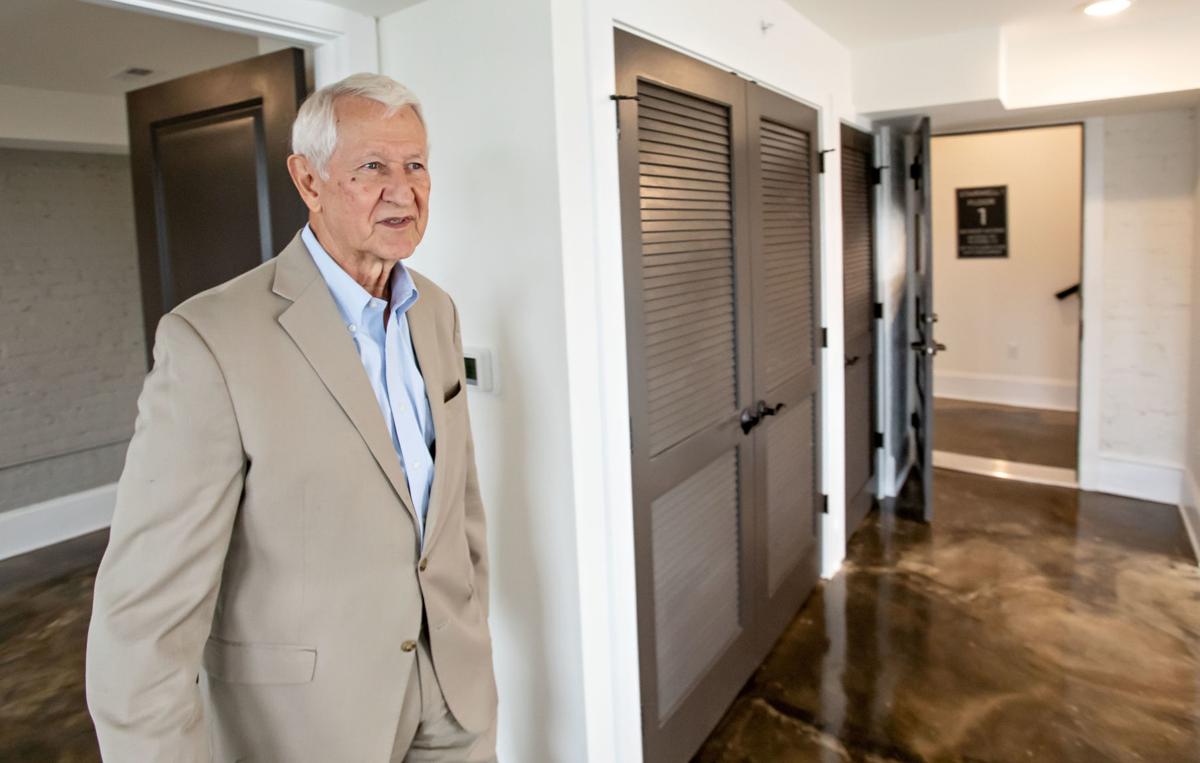 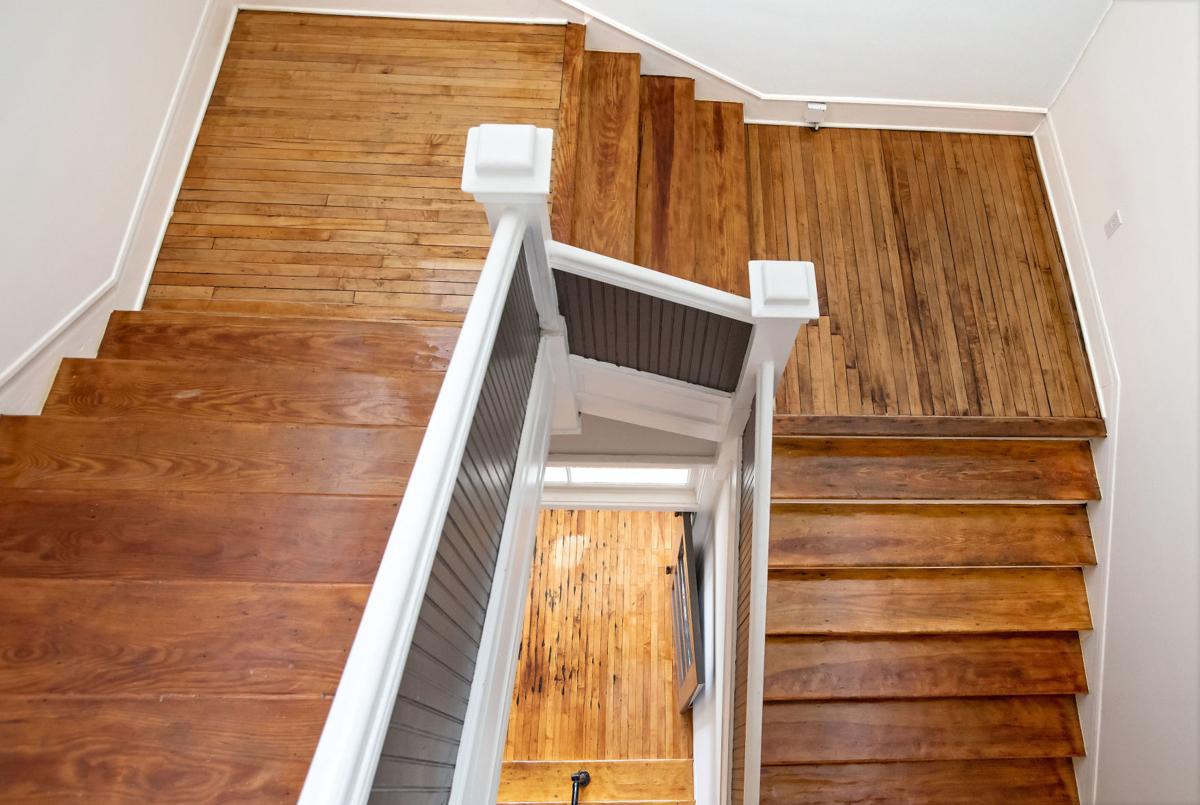 Original wood floors line the staircase of the building. 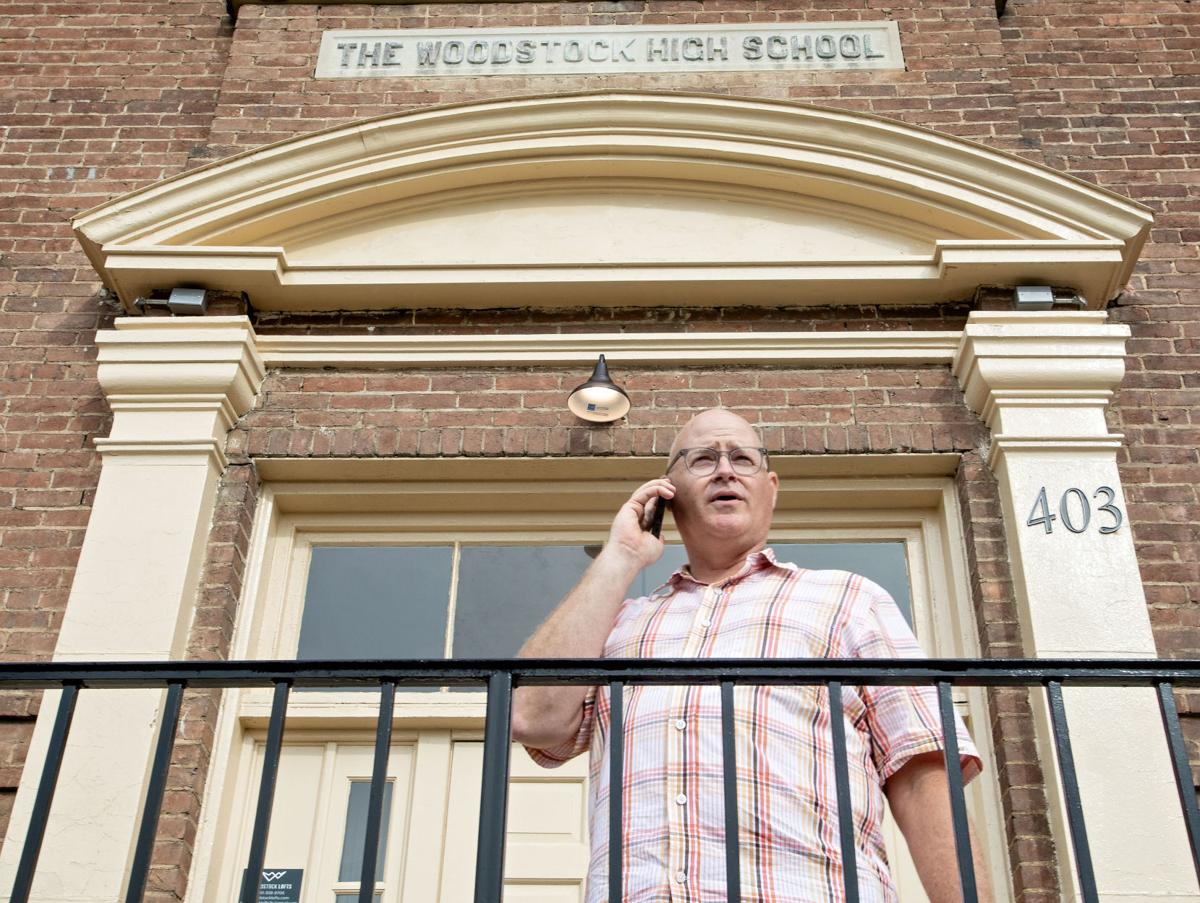 Edwin Gaskin talks on his cellphone at the entrance to the new Woodstock Lofts apartments.

A light hangs inside the foyer at Woodstock Lofts. 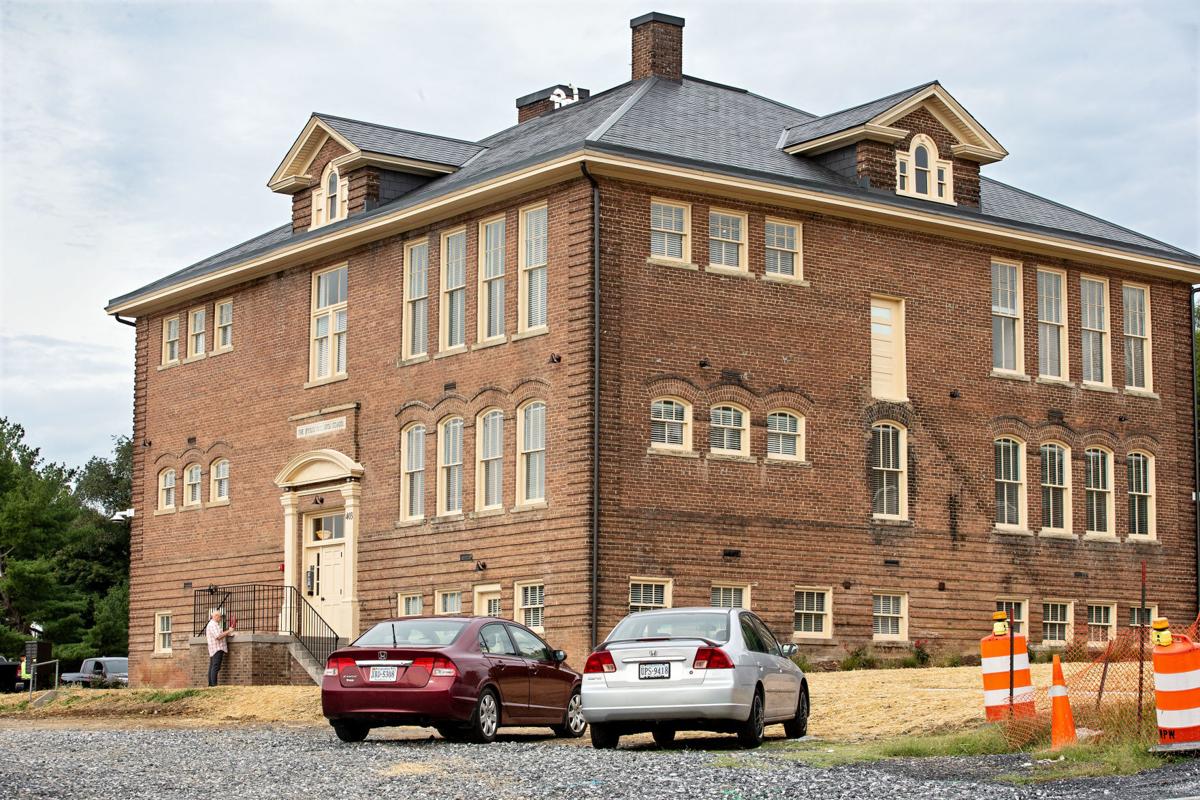 Edwin Gaskin, owner and developer of Echelon Resources, Inc., stands inside the kitchen of one of the 12 new upscale apartments inside Woodstock Lofts. Echelon Resources renovated the former Woodstock school building that the town once considered for its administrative offices.

Original wood floors line the staircase of the building.

Edwin Gaskin talks on his cellphone at the entrance to the new Woodstock Lofts apartments.

A light hangs inside the foyer at Woodstock Lofts.

WOODSTOCK — Keith Stickley couldn’t help but smile as he walked through what used to be his first-grade classroom last week.

“This is amazing,” he said, his grin stretching wider with every pass through the old cement floor room. “It’s hard to believe we had school children in here at one point.”

That room that housed about 43 students at a time during Stickley’s days at the old school building is now one of 12 units at the Woodstock Lofts. The apartment complex at 403 W. Court St. was part of the historic rehabilitation project of an old Woodstock school building that began in March and opened its doors to tenants Wednesday.

“This was the site of my fondest childhood memories,” Stickley said. “I lived just down the street, and I walked these railroad tracks home every day. It was a fun place to be.”

The old school house was rehabilitated by Echelon Resources, Inc., which is owned and operated by Edwin Gaskin.

Gaskin stumbled upon the building when he was in town last year to attend a meeting about the rehabilitation of an old bank building at 114 W. Court St., which his company is also overseeing.

The school was built in 1908, according to the Shenandoah County Library’s “Shenandoah Stories.” When it opened, enrollment at the school was close to 250 students.

The building was the town’s primary school until 1933, when the county school board opened a new high school on the north end of Woodstock. The school then became the Woodstock Elementary School and housed grades 1-7.

When consolidated high schools opened in 1959, the school building became the county’s school board office until 2001.

The building was used minimally after that and began falling into disrepair. The town reacquired the property around 2014 from the county and began looking at alternative uses for the building.

Initial plans to turn the building into a town hall never manifested, and Gaskin approached the town with an unsolicited proposal for the Woodstock Lofts in May 2020.

Gaskin explained that his company focused on historic rehabilitations and had already finished six school projects.

“We had the ability to do a deep dive into the company and their background and the quality of work and were able to see a lot of great success stories,” Woodstock Mayor Jeremy McCleary said. “We got excited about the idea of them coming in and restoring the building with the use of historic tax credits.”

McCleary said the company is known for staying true to the natural design of the buildings and said many town residents spoke out in favor of the project, including Stickley.

“I was certainly in favor of it. I thought it would be a good repurpose of the building,” Stickley said. “The building had been neglected for so many years, and it had become an eyesore for the community.”

Gaskin and his crew began work on the project in March after securing both federal and state historic rehabilitation tax credits.

The tax credits stipulate a negotiation process as to what original materials are kept during the rehabilitation of the building, Gaskin said.

Most of the original materials remain, and builders inserted modern materials. For example, the original baseboards in the units remain and modern baseboards were added to new walls that were constructed. Old chalkboard areas were also kept but modernized.

“It’s not an easy process to navigate, but the reward is the historic rehabilitation tax credits, which we syndicate with investors which helps bring in capital which helps pay down debt on the project,” Gaskin said. “The program is really set up to bridge the gap between what is feasible in terms of new construction versus historical rehabilitation. If we didn’t bridge that gap, historical buildings would be torn down. There’s a lot more efficient ways to build 12 apartments.”

Gaskin, who started working with historic buildings about 20 years ago in Richmond, said he does his research on the history of each building before starting, working to leave the projects as close to its original history as he can.

The building’s original floors remain throughout, with hardwood lining the second and third floors. Concrete flooring, although now finished, remains on the first floor, which used to be the school’s basement.

Nostalgia is not lacking throughout the building, Stickley said, even from just standing outside.

“When they made the pineapple upside down cake, you could smell it on all three floors,” Stickley said, standing just feet away from where he said the old cafeteria used to be.

The completion of the project is a big step for the town, McCleary said. The town plans to add a public parking space in between the Woodstock Lofts building and the nearby railroad tracks within the next month or so, he added.

“All of this builds upon our vision of the town being interconnected. We’ve been working hard since 2016 on this Rails to Trails project, and I think there’s a great deal of reason for optimism for that,” McCleary said. “These projects are exciting for downtown because it gets people living downtown, it feels a need that was there and these are the folks that will go down and buy a cup of coffee in the mornings and have lunch and dinner downtown. Having that connectivity of people living downtown and shopping and dining downtown is a real positive thing.”