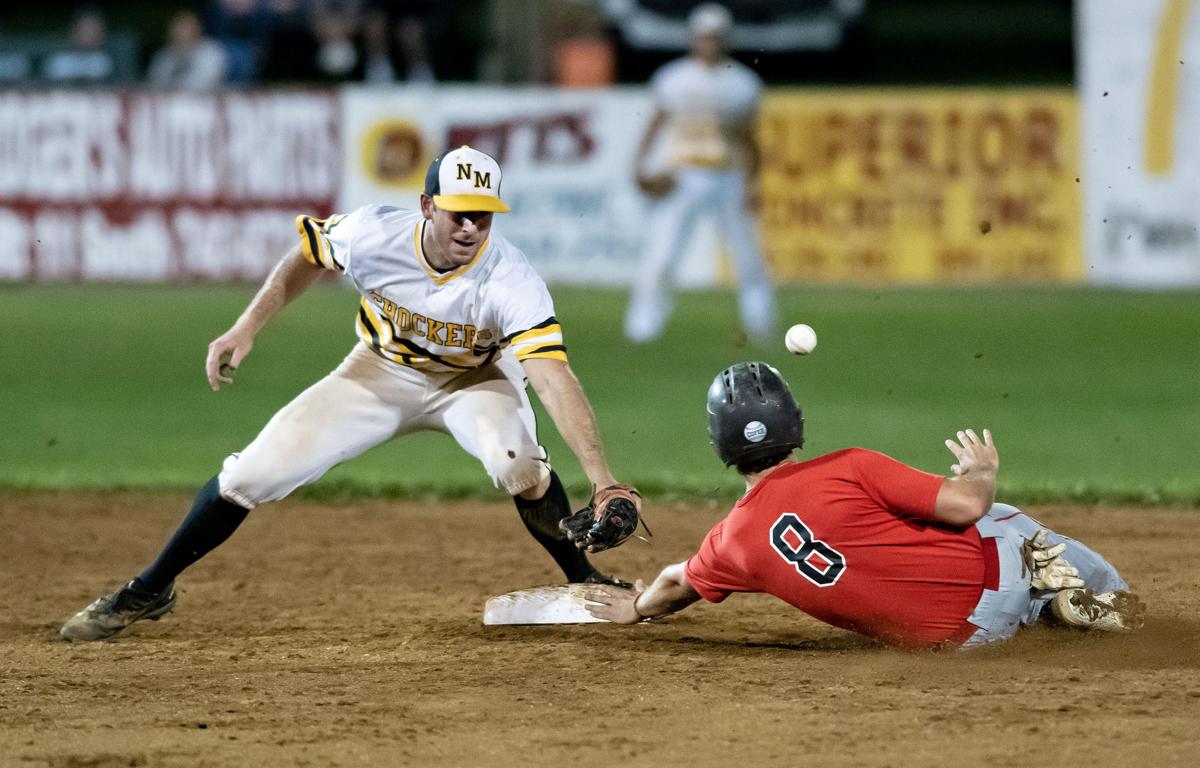 Grottoes’ Jacob Merica slides safely into second base on a steal as the throw gets past New Market’s Nick Goode during fifth inning action Monday night in New Market. 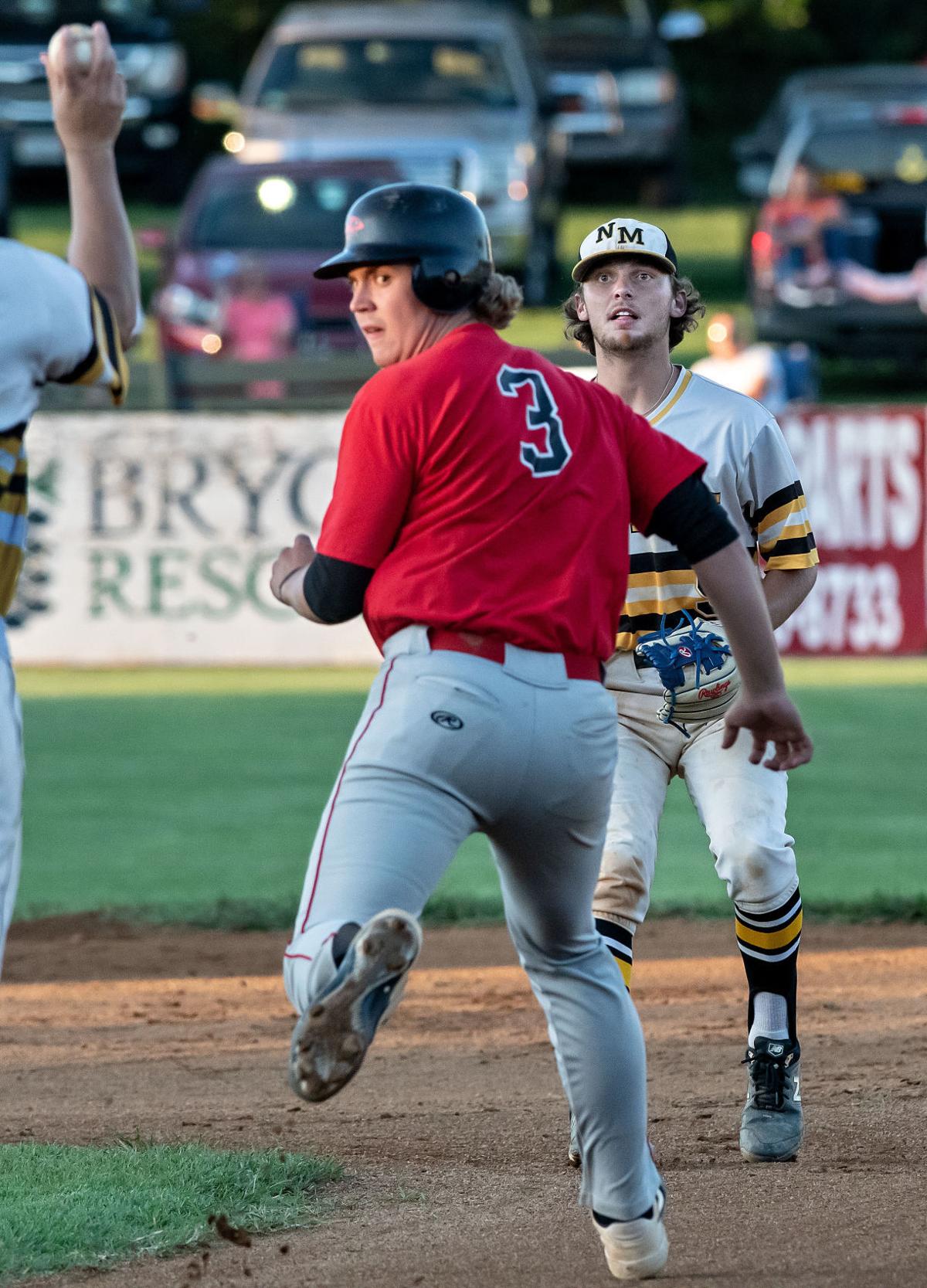 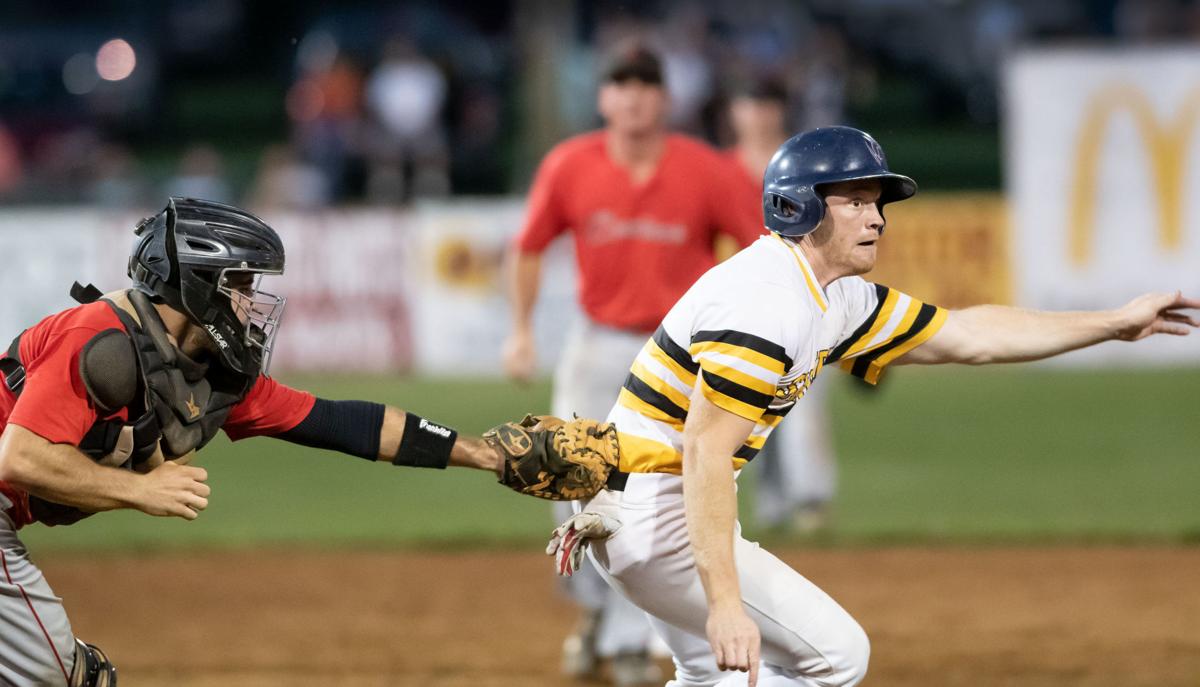 New Market’s Grant Thompson gets tagged out by Grottoes' catcher Dylan Nicely after Thompon was caught in a run down during third inning baseball action Monday night in New Market. 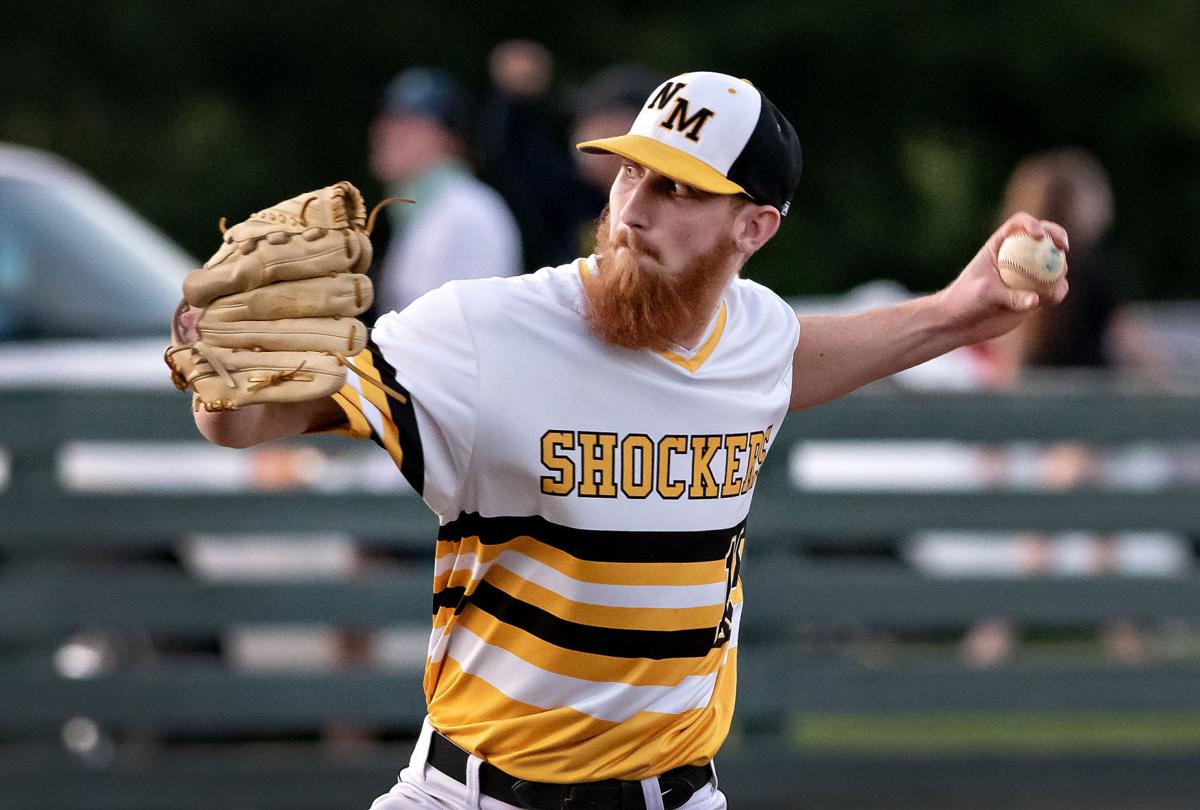 Grottoes’ Jacob Merica slides safely into second base on a steal as the throw gets past New Market’s Nick Goode during fifth inning action Monday night in New Market.

New Market’s Grant Thompson gets tagged out by Grottoes' catcher Dylan Nicely after Thompon was caught in a run down during third inning baseball action Monday night in New Market.

NEW MARKET – For the first time since their formation in 2004, the New Market Shockers are heading to the Rockingham County Baseball League championship series.

Fueled by yet another gem from Darrell Thompson and some early run support for the outstanding left-hander, the Shockers beat Grottoes, 4-2, in Monday’s winner-takes-all Game 5 of their semifinal series that was twice postponed due to rain and poor field conditions. New Market will travel to James Madison University today to take on Broadway, which won the league’s regular-season pennant, in Game 1 of the finals.

It will be the first RCBL championship series appearance for a New Market-based team since the Twin County Twins, the league’s 1972 champ, made back-to-back appearances in the early 1970s before disbanding.

Shockers head coach Nolan Potts said after Monday’s win that New Market, which finished the regular season 1.5 games back of Broadway for first place, has been on a steady upward trajectory since he first joined the team as a player six years ago.

“I came here in 2014 and we won six games. We weren’t competitive. We’d come to the yard, we’d get mercy-ruled every night,” said Potts, whose team tied for the second-best record in the league last summer but was swept in the first round of the 2019 playoffs.

“I’m just happy for the guys,” he added. “I’m happy for (Shockers President Lisa Jones-Hart). I’m happy for the board we have. We’re a talented bunch, and we knew what happened last year. We had that in the back of our minds. We didn’t want it to end tonight. We’re too good of a team. We think we deserve to be in the finals and I think the two best teams in the league are in the finals this year, I really do.”

New Market certainly is tough to beat when Thompson’s on the mound, and Mother Nature helped the former Sherando High School and Shenandoah University standout get back for Monday’s decisive Game 5 on four days’ rest after he threw over 120 pitches in the Shockers’ 11-inning Game 3 loss last Wednesday. Rain washed out the series’ final contest on Saturday, and Potts said the field at Rebel Park was still too wet to be playable the next day, though he noted that Thompson would’ve thrown on three-days’ rest had the game taken place on Sunday.

Thompson went the distance on Monday against Grottoes, allowing two runs (one earned) on four hits and two walks while striking out 13 in the complete-game effort. It was Thompson’s sixth straight outing of 10 or more strikeouts (he’s had eight such games in nine appearances for the Shockers this summer) and the fifth straight start in which he’s pitched at least eight innings.

He said after his latest gem that his approach to Monday’s decisive Game 5 was “just the same as always.”

Thompson, who had to settle for a no-decision in Game 3 last week despite allowing just two runs in nine innings of work, wasn’t quite as starved for run support on Monday.

The Shockers spotted their ace an early lead in the bottom of the first, which began with back-to-back singles from Frankie Ritter and Nick Goode before Pearce Bucher drove both home with a two-RBI double to center off Grottoes starter Tucker Garrison.

“Darrell’s been giving us good efforts the last couple outings, but we hadn’t been performing for him,” said Bucher, another Sherando product and a Shenandoah University sophomore. “I think we just knew we needed to get a jump, get him a couple runs early because he was just gonna leave it there. But we’ve always got a chance to win when Darrell’s on the mound.”

Grant Thompson’s RBI double to right-center in the fifth inning gave New Market a 3-0 lead, and Matt Moon spotted his pitcher an insurance run in the eighth that made it 4-1 Shockers.

Grottoes made things a little interesting in the ninth, beginning when Keegan Woolford, Shenandoah University’s All-American slugger, unloaded on a first-pitch fastball from Thompson and blasted a solo homer to right that cut New Market’s lead in half with one out.

“I’m pretty sure every at-bat he’s seen a first-pitch fastball, so I wasn’t gonna change it. I was gonna make him go after it and all day we went outside fastball and he got really good extension on that one,” said Thompson, who gave Woolford a grin and said, “You were sitting on that one, huh,” as Woolford rounded third.

“He finally made the adjustment. That’s what good hitters do and I’m gonna tip my hat. With a three-run lead with just him up, I was like you know what, let’s see if he changes his approach. If not, it is what it is. But he changed his approach. He was sitting on it and he got a hold of it.”

It was Woolford’s fourth homer of the series.

The Cardinals sent the tying run to the plate twice later in the inning but Thompson prevented any further damage with a pair of groundouts to end the game.

Every New Market starter had a hit in the win – Ty Bennett was the lone Shocker with two hits – though the Shockers stranded eight runners in scoring position.

Garrison, a lefty, allowed three earned runs on eight hits, a walk and five strikeouts in six innings pitched for Grottoes before giving way to reliever Eric Watkins, who gave up an unearned run on two hits and two walks while striking out three.

Broadway, which swept New Market – in lopsided fashion – in three regular-season meetings this summer, now stands between the Shockers and their first RCBL title.

“It feels great,” Bucher said of reaching the championship series. “The city of New Market’s real proud of us right now, so it’s great to perform for them because they give us good showings out here every night. And just as a college athlete, having the season taken away from us the way it was, it was just a great feeling to be playing for something this summer. I think that’s why we’ve been so motivated all year: (we’re) just trying to play for a championship because we didn’t get the opportunity to do that in the spring.”