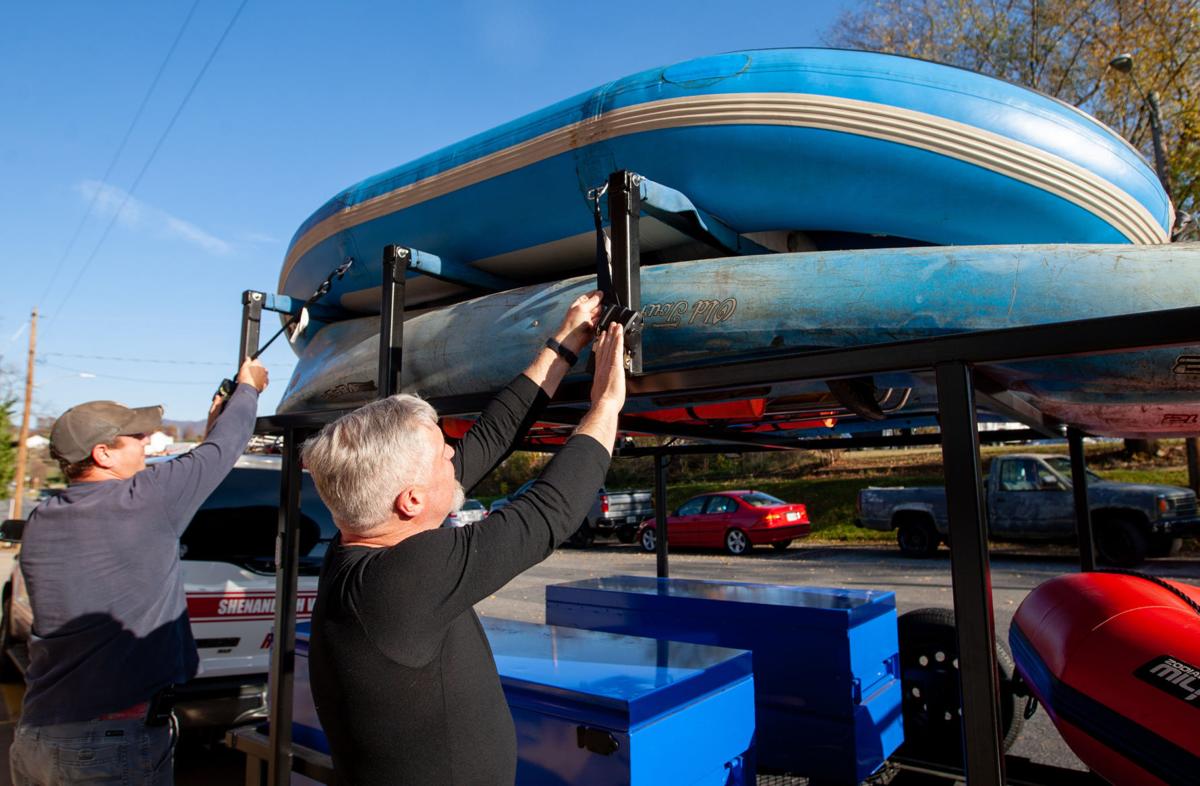 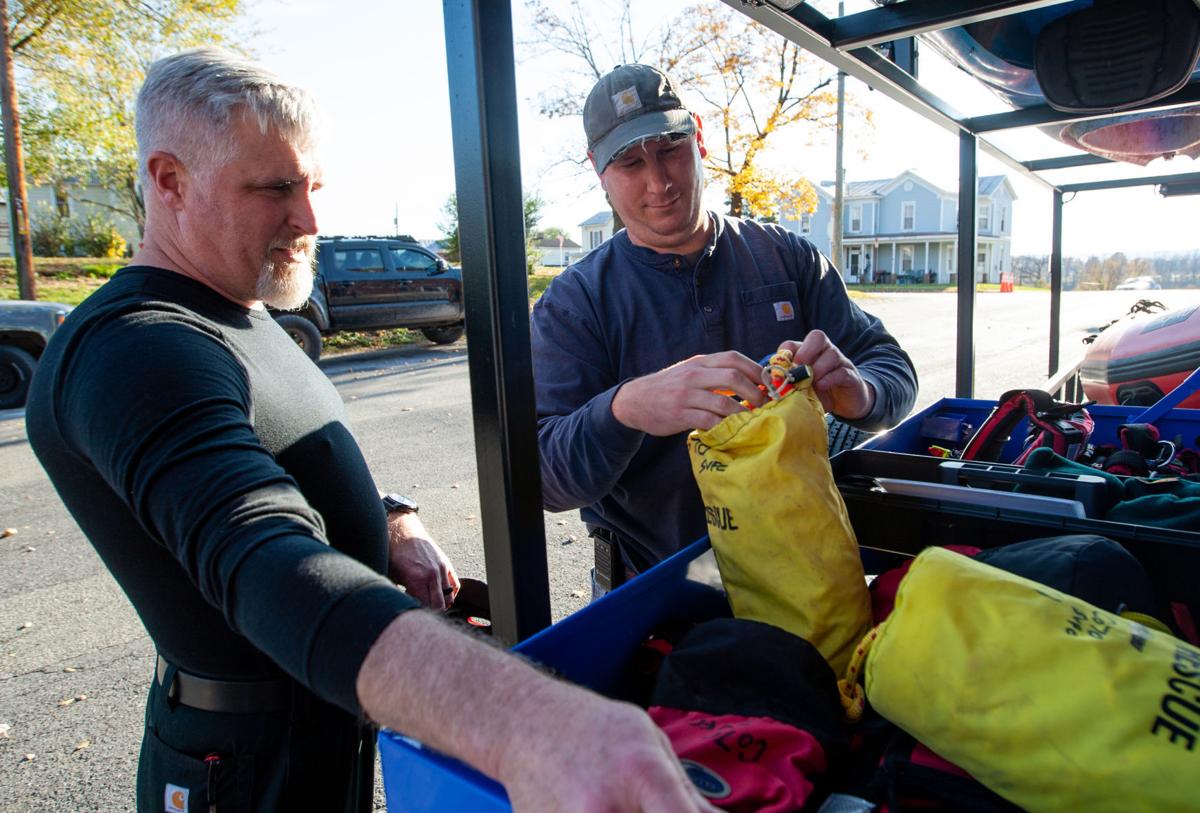 “It got to the point where the seams were leaking and it just wasn’t holding air. I reached out to [Nichols] to pretty much replace our existing raft that we currently had with something that was safe for our people and even the victims we get out of the water,” says Shenandoah Volunteer Fire Company Chief Dustin Lucas, right.

“It got to the point where the seams were leaking and it just wasn’t holding air. I reached out to [Nichols] to pretty much replace our existing raft that we currently had with something that was safe for our people and even the victims we get out of the water,” says Shenandoah Volunteer Fire Company Chief Dustin Lucas, right.

No pool floatie or beach toy, the rafts the Shenandoah Swift Water Rescue Team use can get rescuers to a submerged vehicle in a flooded roadway or ferry capsized victims from river rapids to safety.

A raft is a multipurpose tool for water rescues when seconds count, said Dustin Lucas, chief of the Shenandoah Volunteer Fire Company and member of the swift water rescue team.

Stephen and Kelli Nichols, owners of Massanutten-based Massanutten River Adventures, donated an inflatable raft from their inventory to the Swift Water Rescue Team of the Shenandoah Volunteer Fire Company. The community-funded team of volunteers, which only had one raft, had been looking for a replacement but had to find an affordable option.

A used raft of this type can cost a minimum of $1,000, whereas a new raft can set buyers back up to $5,000, said Stephen Nichols. According to Nichols, there are supply issues with rafts lately, which made it difficult for the volunteer rescue team to find a replacement.

“[New STAR rafts] are $2,200 apiece, so they’re more than people realize a raft costs,” Nichols said. “Right now, that raft is sold out until August of 2022. We buy [watersports equipment] by the tractor-trailer load. We’re a fairly substantial customer and our boats never showed up this year. We may get them August of next year, that’s how back-ordered they are.”

The team’s existing raft was 12 years old and had problems staying inflated.

“It got to the point where the seams were leaking and it just wasn’t holding air. I reached out to [Nichols] to pretty much replace our existing raft that we currently had with something that was safe for our people and even the victims we get out of the water,” Lucas said.

Nichols posted on the business’ Facebook page advertising multiple 12-foot, used, high-quality STAR brand rafts for sale. Massanutten River Adventures used to offer rafting as a watersport rental option, but during the COVID-19 pandemic the owners decided to phase out rafting and focus on kayak and canoe rentals.

“We have rafts for when the water’s up to still safely run people up and down the river. Honestly, they don’t get used that much,” Nichols said. “We really just don’t get the rain we used to.”

Lucas inquired about buying one of the rafts, but when Nichols heard Lucas’ story, he and Kelli Nichols decided to donate the inflatable to the team of trained water rescuers.

“Being an outfitter, we’re all about supporting folks that are going to rescue people if they need it. Thankfully, we’ve never needed their services,” Nichols said. “We couldn’t think of a better thing to do than help them out.”

A dive team that was founded in the 1980s evolved to become the Shenandoah Swift Water Rescue Team, which is a division of the Shenandoah Volunteer Fire Company, founded in 1906. The team currently has around 10 members. James Williams is the assistant chief and also part of the swift water team, which is made up of members of the fire company who elect to receive additional training for water rescue.

“The state offers a curriculum. [It teaches] basic survival skills, defensive swimming, victim rescue and a lot about learning how to read the water as far as the rapids and stuff. Obviously when the river floods, that’s when defensive swimming comes in to play, you know, like what to look for and what to avoid; how not to become a victim,” Lucas said. “You learn some water hydrology, like understanding the flow of the water.”

Not every fire department has a swift water team. Williams said his team started out in 1983 as a dive team for Shenandoah Fire Company, which is located near the South Fork of the Shenandoah River. The team serves the town along with Page County and assists the Rockingham County Swift Water Team and other rescue squads in the area.

“It makes it nice when you have members that are interested in going and doing the training and spending their time to do the training and you have the community to help you out, that really means a lot,” Williams said. “It was time to get another [raft]. If the gentleman wouldn’t have donated that to us, we would have to have went and bought one.”

Usually receiving upwards of 10 water rescue calls each year, members of Shenandoah’s swift water team said the most incidences occur during the warmer months, when more tourists venture out onto the water. Calls also occur for flooded roadways.

“On average, we’ll do between 10 and 15 calls in Page County and every so often, when called for, we’ll provide services to Rockingham. Most of our [calls] will be people floating on the river that got stranded in the rapids or capsize in the rapids,” Lucas said.

Lucas offered safety tips for folks venturing out on the water. He said the some of the biggest precautions to take occur before leaving on a trip. Lucas urged good communication with those on land about the plan for the trip, bringing a cell phone in a watertight container and paying attention to landmarks in case a rescuer needs to locate you in an emergency.

“Communication between where you’re going and when you expect to be done. If something, God forbid, were to happen, try to remember certain landmarks as you’re going down the river,” Lucas said. “Communicate with people where you’re going, your time to be off. If you do take a cell phone, make sure it’s in a dry bag. A cellphone like this is kind of useless soaking wet.”

The team’s SUV and trailer, deployable at any time, carries life vests, dry suits, rope gear and kayaks, which are used to ferry rope lines for rescues in the middle of a waterway. The setup also includes a motorized inflatable Zodiac brand boat the team acquired through grant funding, which takes a bit more time to deploy and requires deeper water than the raft.

“Honestly, with the river condition the way it is now, [the raft] is more pertinent to what we’ll use than our power boat. It’s more accessible. Two or three of us can grab this thing and carry it 100 yards to a bank somewhere and deploy it really quick,” Lucas said.

Nichols, who’s offering more rafts and some used kayaks for sale on Facebook, said he’d be open to donating equipment to other rescue teams in the area who are in need.

“We still have some other [rafts,]” Nichols said. “We were talking about getting in touch with the Harrisonburg water team as well to see if they need some, we haven’t put that together yet. Ideally. we’re also trying to sell some. The concept that people are volunteering to go out there and help deal with those situations, it was touching and I felt compelled to help out.”