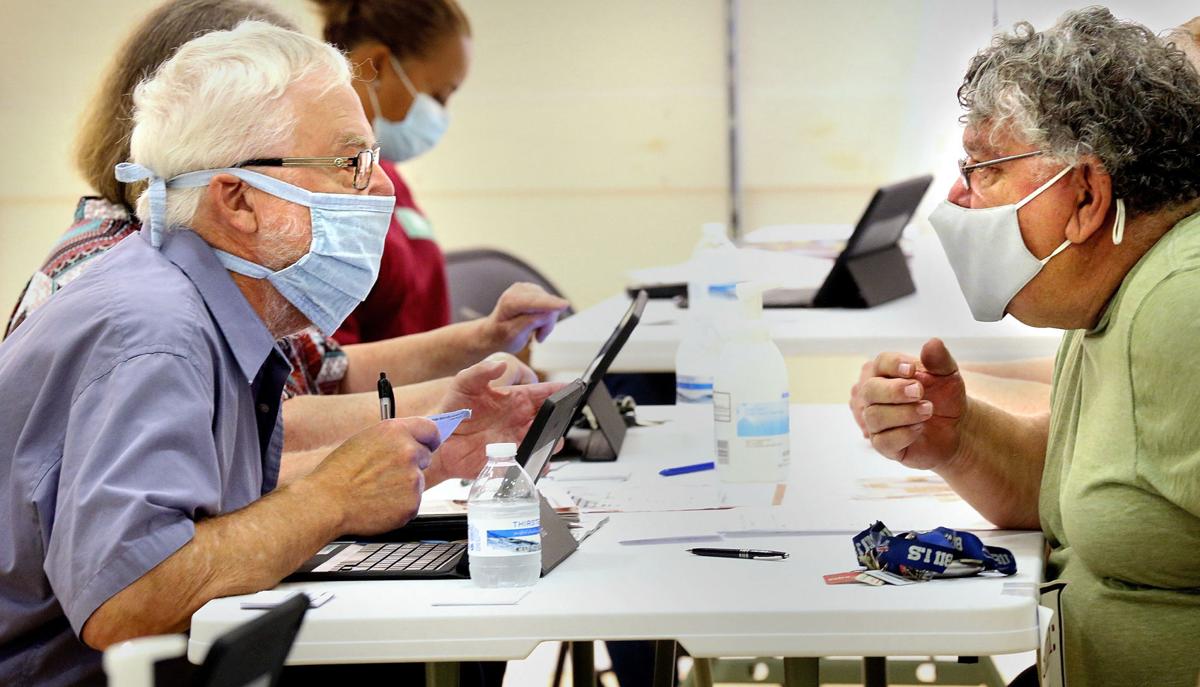 Valley Health volunteer David Goodwin, of Frederick County, left, checks in Tony Iacono, 69, of Winchester, who came to get his Pfizer COVID-19 booster shot at the Valley Health Vaccine Clinic in the Apple Blossom Mall on Wednesday. Goodwin started volunteering in March when the vaccine clinic was located at Shenandoah University and had worked his 129th three-hour shift as of Wednesday. 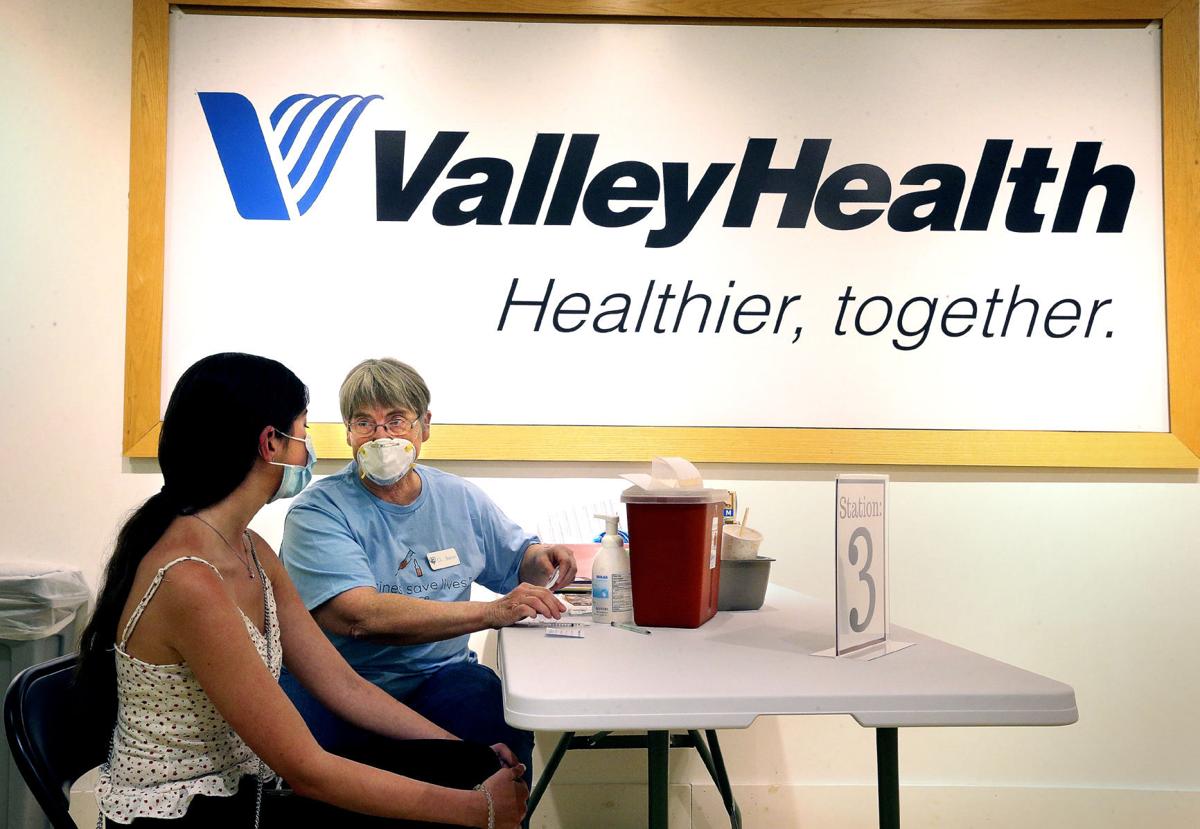 Retired physician Anne Bacon, of Winchester, talks with a patient before giving her a COVID-19 vaccine injection Wednesday at the Valley Health Vaccine Clinic in the Apple Blossom Mall. 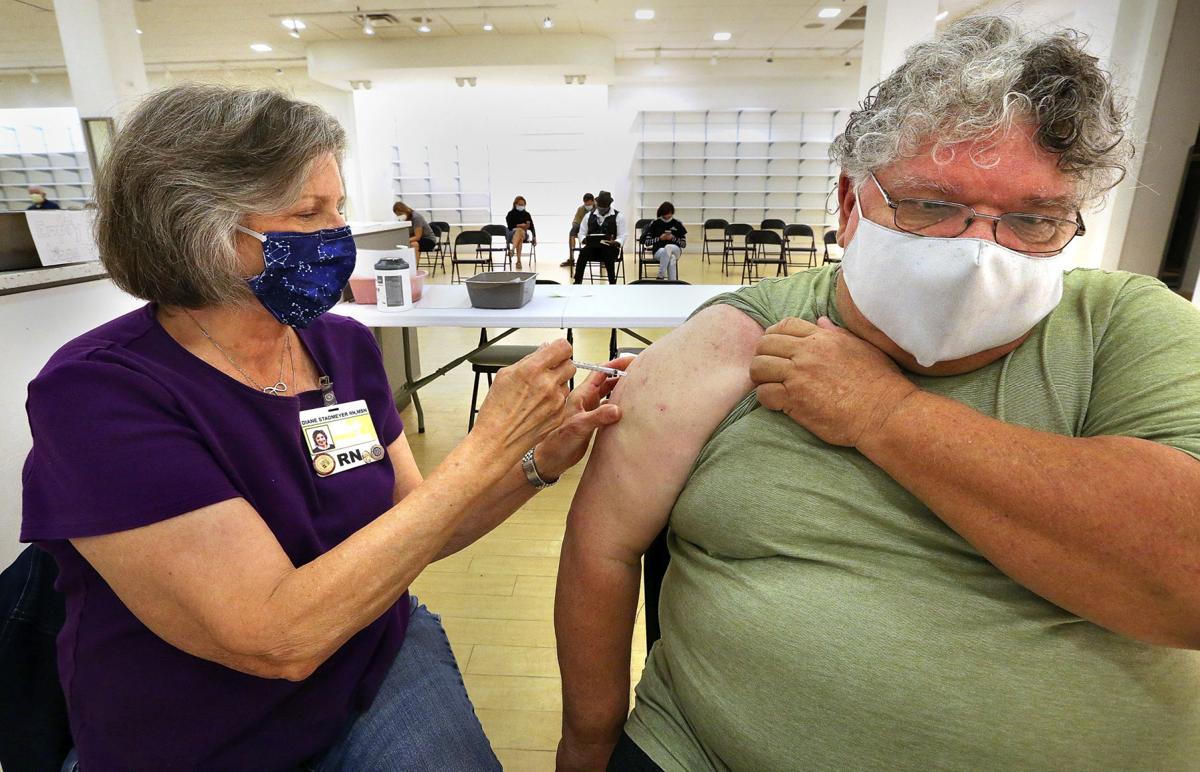 Valley Health volunteer David Goodwin, of Frederick County, left, checks in Tony Iacono, 69, of Winchester, who came to get his Pfizer COVID-19 booster shot at the Valley Health Vaccine Clinic in the Apple Blossom Mall on Wednesday. Goodwin started volunteering in March when the vaccine clinic was located at Shenandoah University and had worked his 129th three-hour shift as of Wednesday.

Retired physician Anne Bacon, of Winchester, talks with a patient before giving her a COVID-19 vaccine injection Wednesday at the Valley Health Vaccine Clinic in the Apple Blossom Mall.

“I was looking at what my colleagues were doing in the hospital and felt very guilty, torn,” she recalled.

They had a clear purpose in helping fight the virus, but she didn’t know how to help.

Then, after the vaccine became available and Valley Health announced that it was looking for volunteers to help administer shots, she knew that was something she could do.

Stadmeyer first volunteered at Shenandoah University’s clinic. Then last spring, as peak demand for the vaccine started to wane and that location closed, she and several other volunteers transitioned with the clinic to the Apple Blossom Mall, where a walk-in site continues to operate from noon to 7 p.m. every Wednesday and Saturday afternoon.

Patients can walk in or book an appointment for a COVID-19 vaccine or booster shot at the Apple Blossom Mall clinic. The site is located within a store between Victoria’s Secret and LensCrafters. The most convenient entrance is near H&R Block or LensCrafters.

For volunteers, being part of the solution is a big reason why they keep at it week after week.

“I retired a couple of years ago just before the pandemic started,” said Dr. Anne Bacon, formerly a rheumatologist.

“When this started, [I was] just watching what my colleagues were doing … and what they had to go through, and I felt a little helpless,” she said.

Like Stadmeyer, she said administering vaccinations was something she knew she could contribute.

“Learning how to stick a needle in an arm is not a skill that you lose very quickly,” she said.

Not all of the clinic’s volunteers come from the health-care field, though.

Caryl Hickel, retired from the Army Corps of Engineers, has volunteered with registration and checkout, while her husband, Bob, retired from the Army, is a greeter but has also shuttled patients in a golf cart through the Shenandoah University parking lot and helped people into and out of their cars as necessary.

“It was just a way to give back to the community,” said Caryl Hickel. “We’re retired. We’ve got the time and the ability.”

Even before she started volunteering, she recalled sewing hundreds of masks using packets that her husband picked up from Winchester Medical Center for her to piece together at home each week on her sewing machine.

The Hickels were among those first in line for the vaccine last January and early February because it allowed them to visit his mother in hospice before she passed away.

“We were so blessed earlier this year to be able to get our shots,” said Caryl Hickel.

What makes the Apple Blossom Mall clinic different from many other community options is that it doesn’t require appointments.

People can just show up and get a vaccine.

Since it opened at the mall in May, Jason Craig, director of Valley Health urgent care’s central region, said the clinic has administered more than 10,000 shots, which he said averages about 150 each day they’ve been open.

“That’s a testament to the volunteers there,” he said.

“They continue to bring awareness that we’re still there,” he said. “On behalf of the health system, … I just want to express thanks.”

Volunteers say they’re seeing a lot of walk-ins for booster shots since the Food and Drug Administration granted emergency approval this month for boosters of the Pfizer vaccine to patients who became fully vaccinated at least six months ago.

Patients who received the Moderna or Johnson and Johnson vaccine have not yet been found to need a booster shot, Lord Fairfax Health District Director Dr. Colin Greene said earlier this week.

Bacon, who travels around the health district with the Virginia Medical Reserve Corps, said it’s been frustrating and baffling, however, to see so relatively few people stopping by the clinic this summer following the winter and spring rush.

“It was getting a little discouraging because we weren’t seeing people come in and get their vaccines,” she said.

She and other volunteers try to answer questions about the vaccine or they refer visitors to the Centers for Disease Control and Prevention’s website, cdc.gov/vaccines/covid-19/index.html.

Lately, Bacon said, they’ve also been getting questions about the flu shot, which Greene has said is safe to receive alongside the COVID vaccine.

“We’ve been telling people for a while that … if they’re pregnant they should get the vaccine,” Bacon said.

“Pregnant women are at higher risk of complications from COVID,” she said. “If the mothers are at risk, then the babies are at risk.”

Specifically, pregnant women should get the mRNA vaccine, she said, which is provided by Moderna and Pfizer, because the Johnson & Johnson vaccine has been linked to blood clots in a small percentage of people.

Though they sometimes treat the vaccine-hesitant, Stadmeyer said some patients accept the vaccine even more begrudgingly.

“Some people are unhappy to get it, but we all thank them for our benefit,” she said.

For her part, she said her grandchildren were a big reason why she got the vaccine.

With two in California and three in Leesburg, all of them 7 or younger, she said her choice keeps them safe since they can’t be vaccinated yet.

The summer lag “was more sad than frustrating,” she said.

“It was difficult to understand why people weren’t becoming vaccinated,” she said, “especially when we had such a rush at Shenandoah University. People at Shenandoah were thrilled, they couldn’t wait. At least we get people in, so that’s half the battle.”

Correction: This story has been updated to correct the spelling of Caryl Hickel's last name.