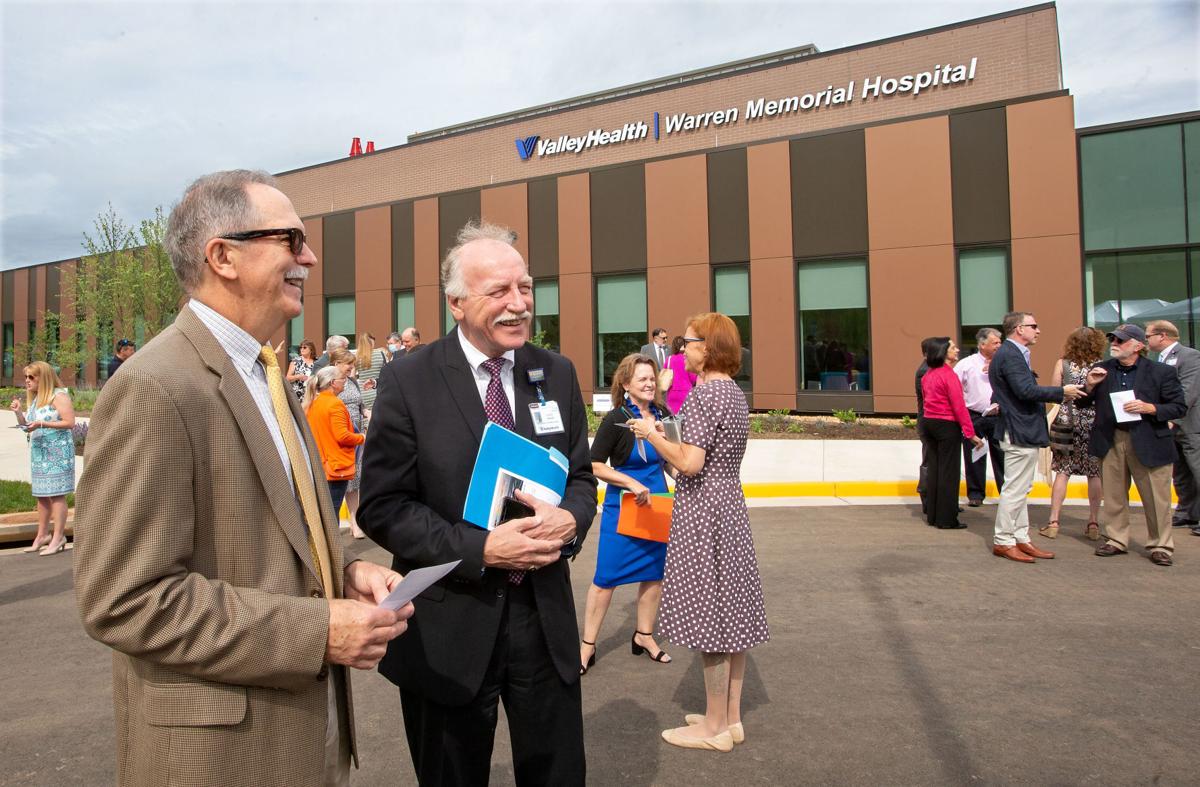 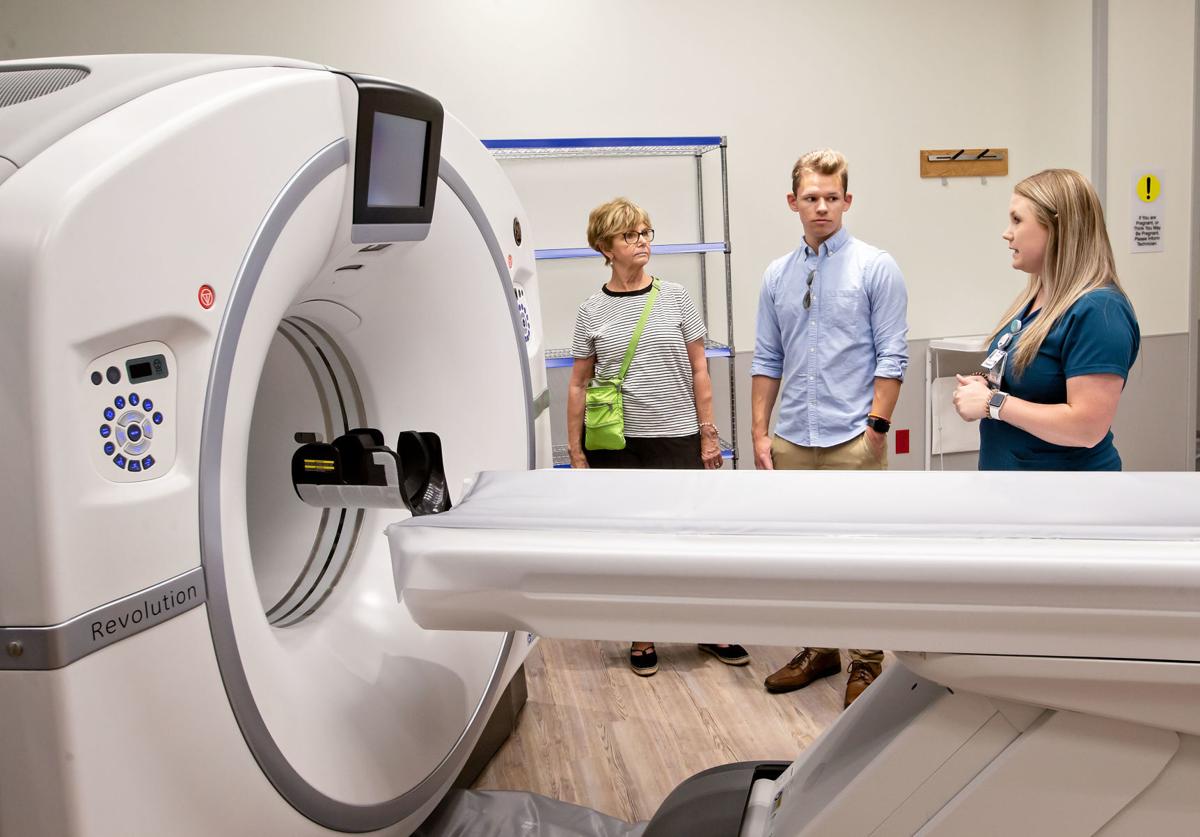 Carol Vaughan, of Winchester, and her grandson Parker Meltvedt, 21, take a tour of the hospital’s CT scanner by radiology technician Kailey Skaggs. 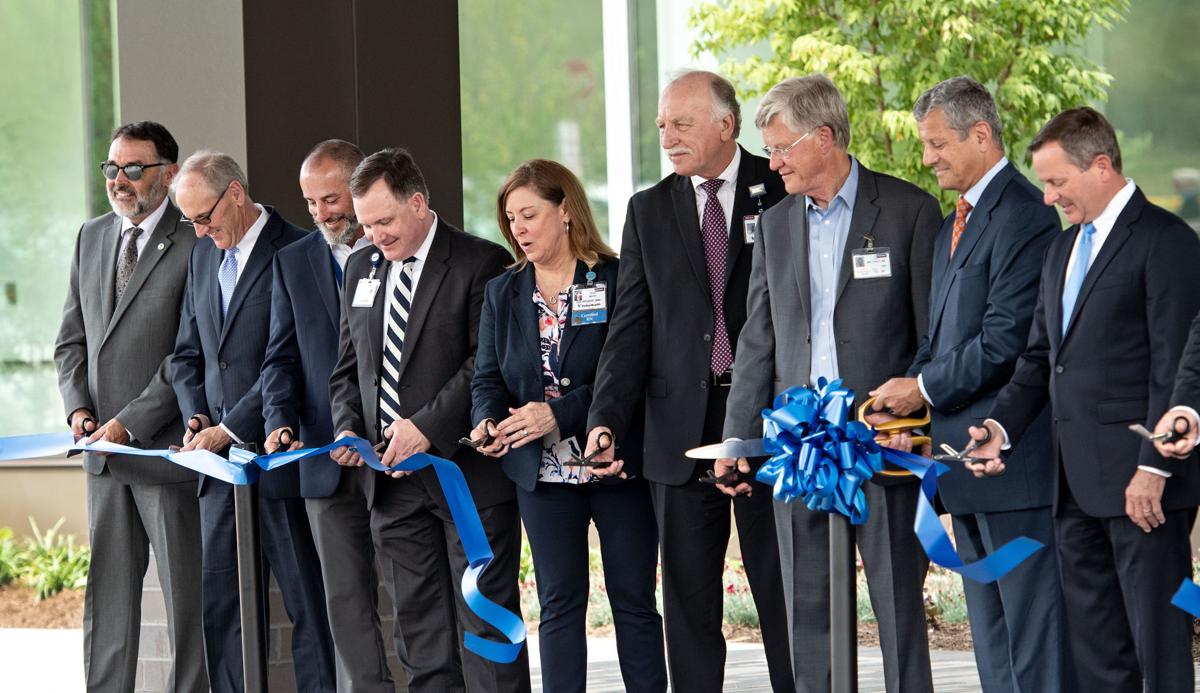 Valley Health and local dignitaries cut the ribbon on the new hospital. 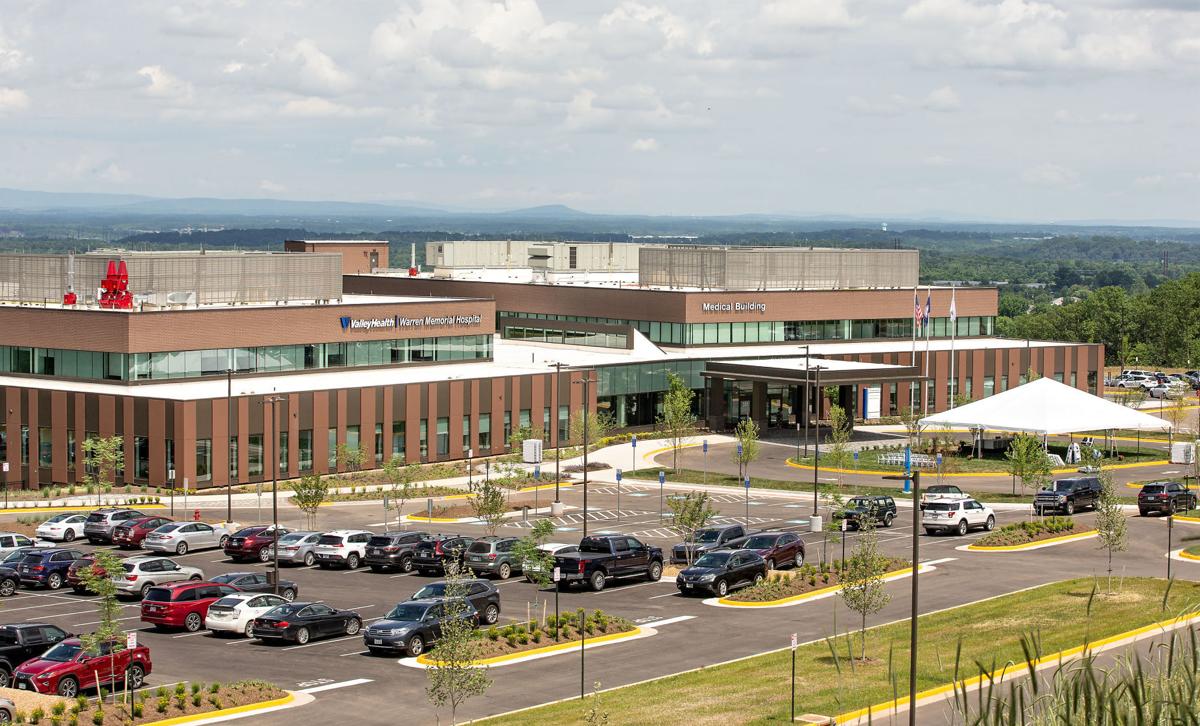 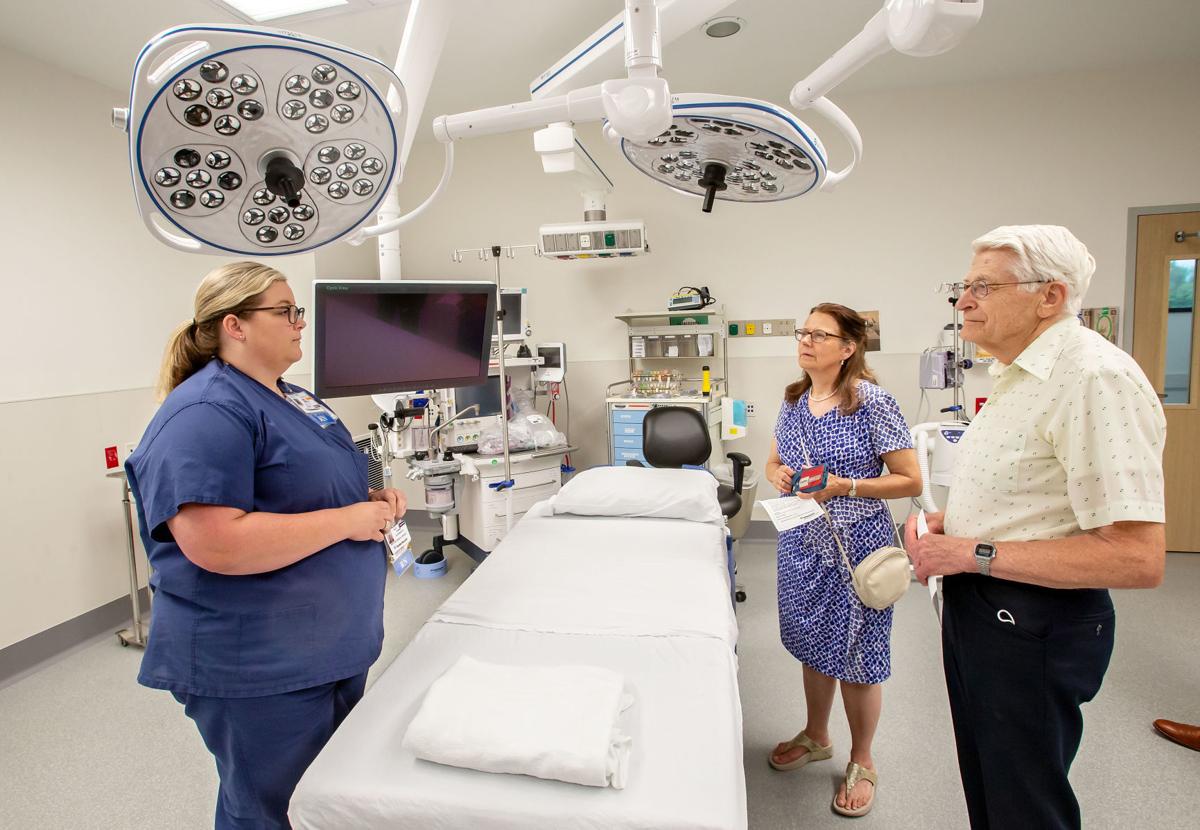 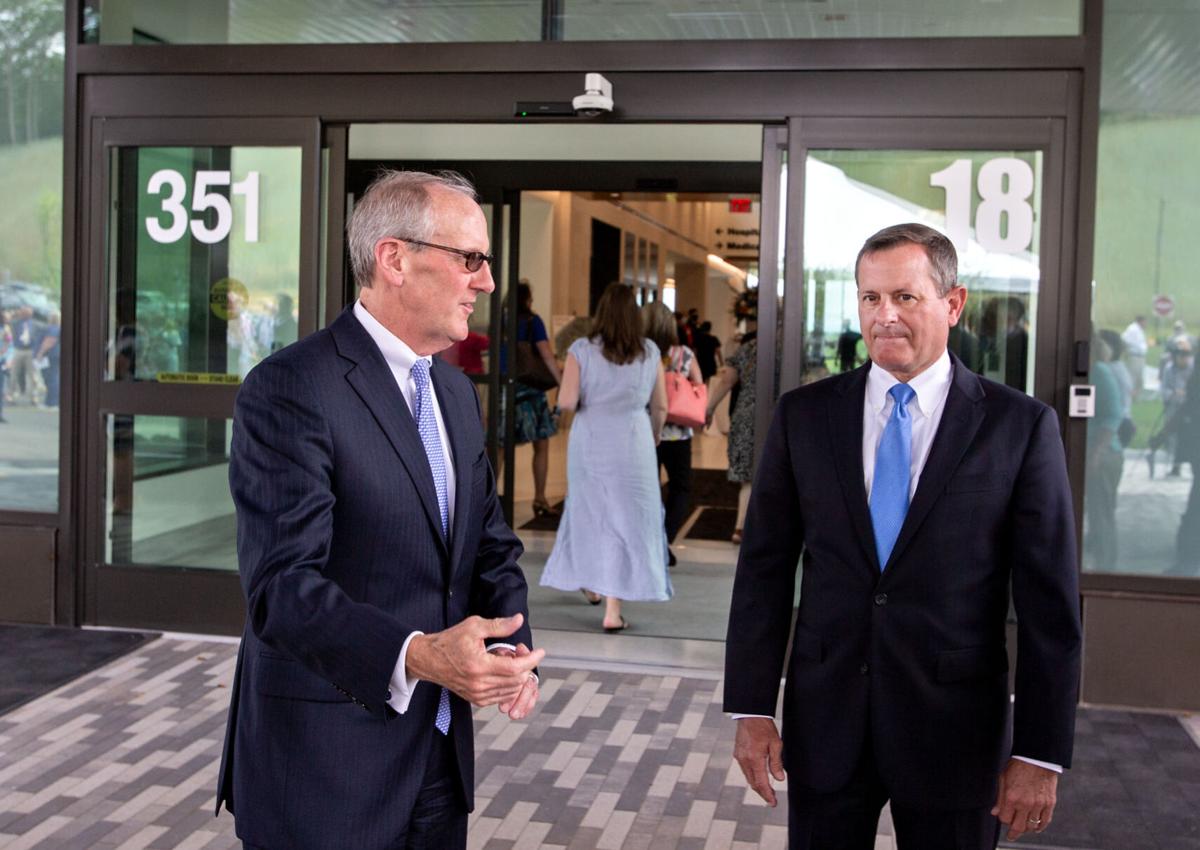 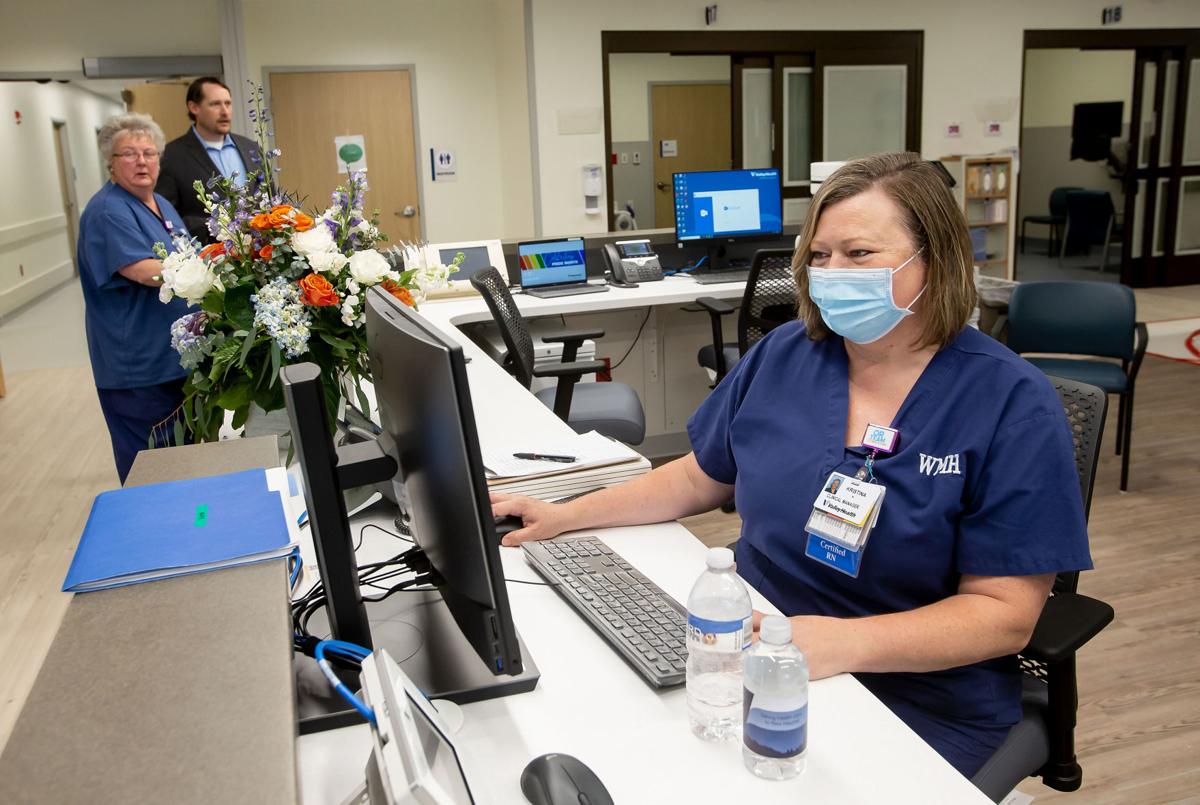 Carol Vaughan, of Winchester, and her grandson Parker Meltvedt, 21, take a tour of the hospital’s CT scanner by radiology technician Kailey Skaggs.

Valley Health and local dignitaries cut the ribbon on the new hospital.

FRONT ROYAL — Valley Health celebrated the completion of its nearly $100 million Warren Memorial Hospital on Tuesday with a ribbon-cutting ceremony and guided tours for staff members and community leaders.

The new hospital at 351 Valley Health Way, off of Leach Run Parkway, takes the place of the smaller Warren Memorial Hospital at 1000 N. Shenandoah Ave. that opened in 1951.

Speaking at a morning ceremony, Valley Health President and CEO Mark Nantz said the ribbon cutting was a first for him in his 34 years in health administration.

Though new hospitals might seem like a frequent occurrence, he said, “This is a once-in-a-career thing for a lot of people.”

Nantz, who joined Valley Health in June of 2020, credited previous CEO Mark Merrill with facilitating the construction of the new hospital, which has taken years of discussion and planning to make it a reality.

Merrill, who also attended Tuesday’s ceremony, called it an exciting moment for the community.

The new hospital offers new features to the community like a second CT scanner  and a helipad. It also offers nuclear medicine for procedures such as bone and thyroid scans.

New services will include the Physical Therapy and Sports Performance Department with certified staff and specialized equipment to help patients recover after surgery or injury. The department will also welcome anyone who wants to build stamina or improve conditioning.

A Valley Pharmacy retail location off the main lobby on Level 2 will participate in the “Meds-to-Beds” program to provide direct delivery of medications and education to patient hospital rooms before discharge.

Staff and community members will also have access to the pharmacy from 9 a.m to 6 p.m. on weekdays and 9 a.m. to 1 p.m. on Saturdays.

Larger inpatient rooms and hallways make the patient experience easier and also help nurses better address patient needs. Units are situated to allow for the consolidation of testing to reduce the amount of travel patients have to do while staying in the hospital.

The hospital has 36 private inpatient rooms, each with a view, including 12 critical care step-down rooms.

Additionally, the facility has an 18-bed emergency department that’s larger than the previous one and is more welcoming for Emergency Medical Services crews and waiting families. An adjoining Clinical Decision Unit offers five additional beds.

Furthermore, the building is larger and is brighter, offering natural light and views of the mountains to the west and the sprawling grounds to the east.

“The view is like, wow,” said Dr. Robert Meltvedt, a 24-year career professional, who insisted that the facility is the best among Valley Health’s six regional hospitals and possibly even the best in Virginia as far as pure patient experience. “It’s gonna be great.”

During the pandemic, Warren Memorial had switched its inpatient double-occupancy rooms to 24 private ones, and the new facility has 50% more private rooms, said Meltvedt, a surgeon and vice president of medical affairs for the hospital.

For all its new features, the new hospital isn’t bringing the return of a labor and delivery unit to the county, a fact that Meltvedt said has led to some difficult discussions.

He said the decision not to include a birthing unit came down to the limited resources for Valley Health staff to treat all the potential medical complications that can arise late in pregnancy, including caesarean births and the treatment of expectant mothers dealing with substance abuse and mental health concerns.

Winchester Medical Center is more equipped, he said, and staff determined that the population of Warren County would be better served there.

The new Warren Memorial offers mammography and OB-GYN care as well as other less critical services, in addition to its emergency and intensive care units. The 28-acre developed campus also has room to grow.

“Moments like this, we should celebrate the good things,” said Floyd Heater, hospital president. “One thing we should never do is take our health for granted.

The facility will open at 6 a.m. June 23 when it moves patients in from the old building. Lynn Care Center, home to 120 long-term care residents and skilled nursing home patients, will continue at its site adjacent to the old hospital building.

Valley Health is studying options for the vacated building and is considering community needs and site feasibility.

The hospital capital campaign has so far raised more than $2.5 million toward paying off the building.