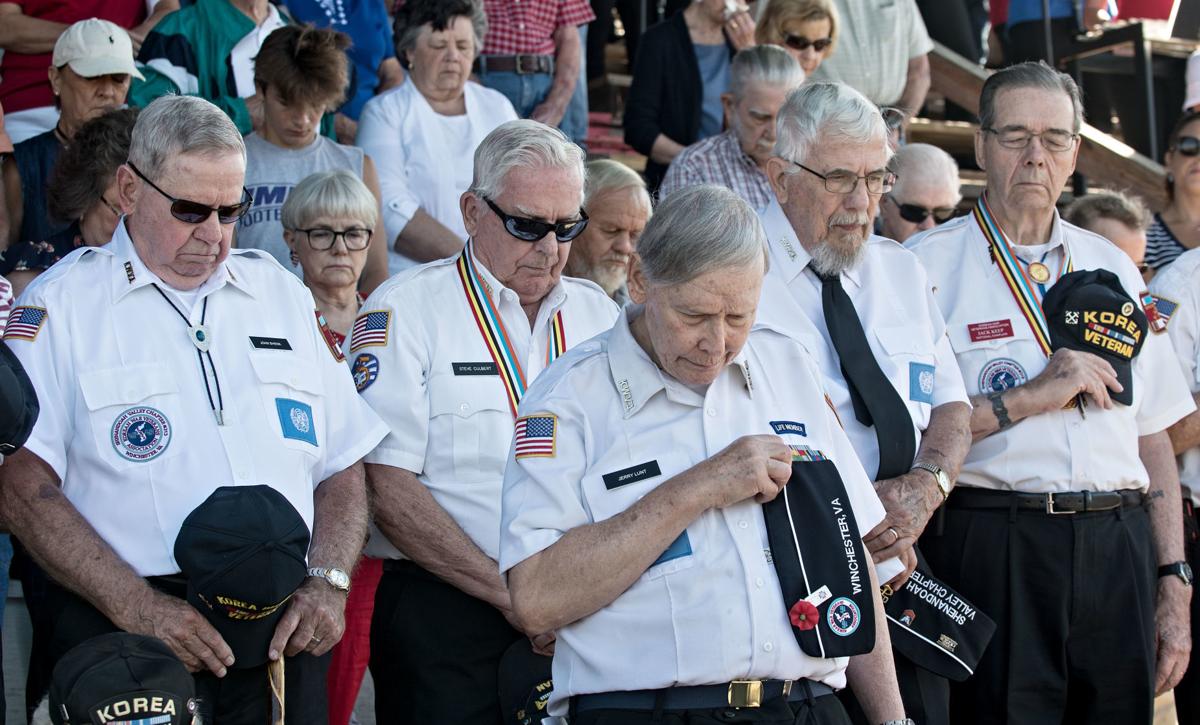 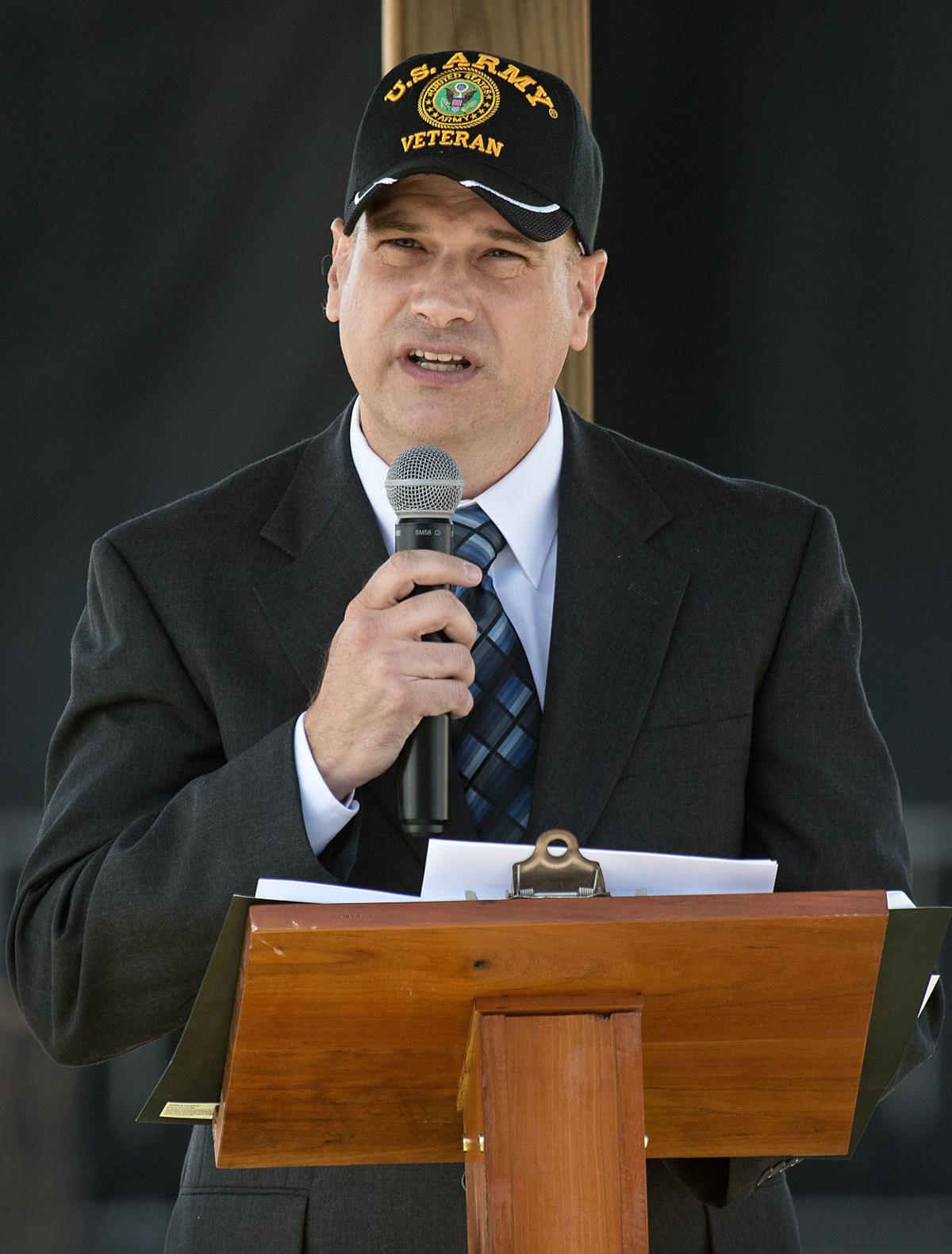 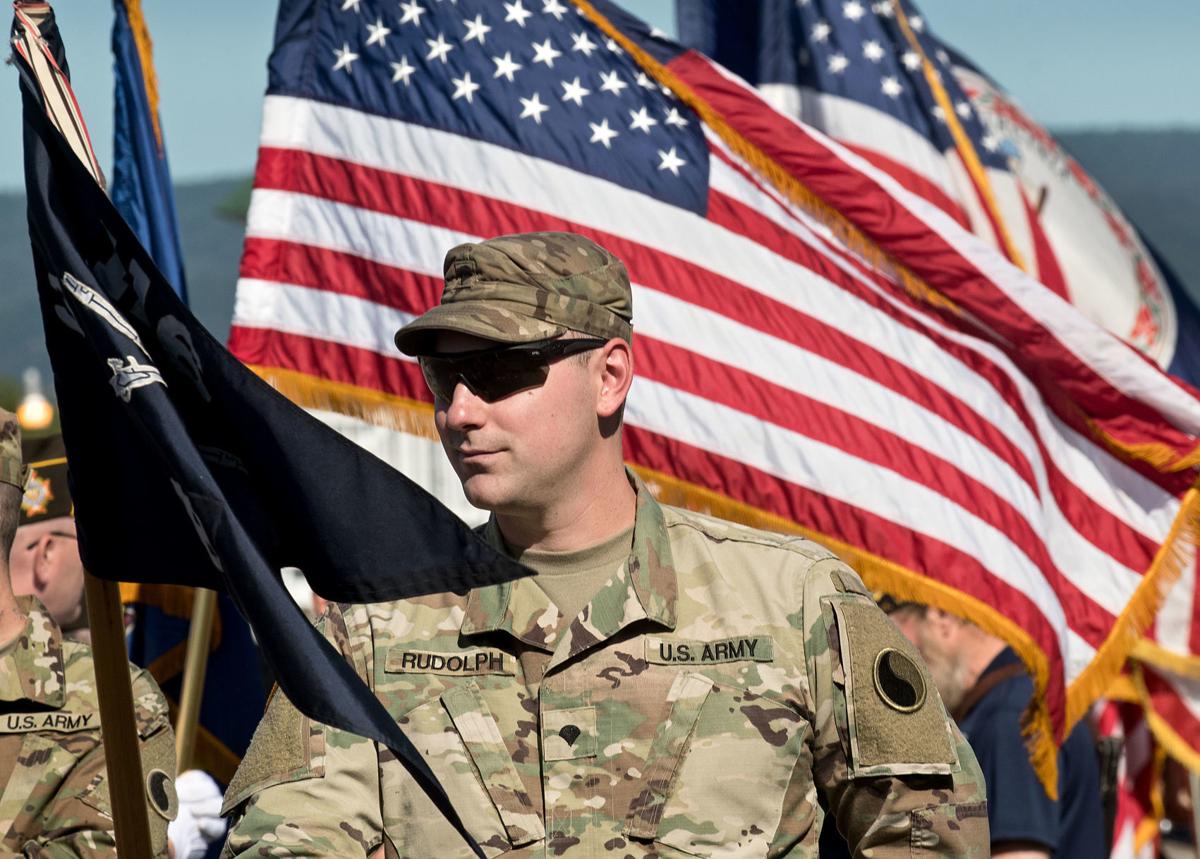 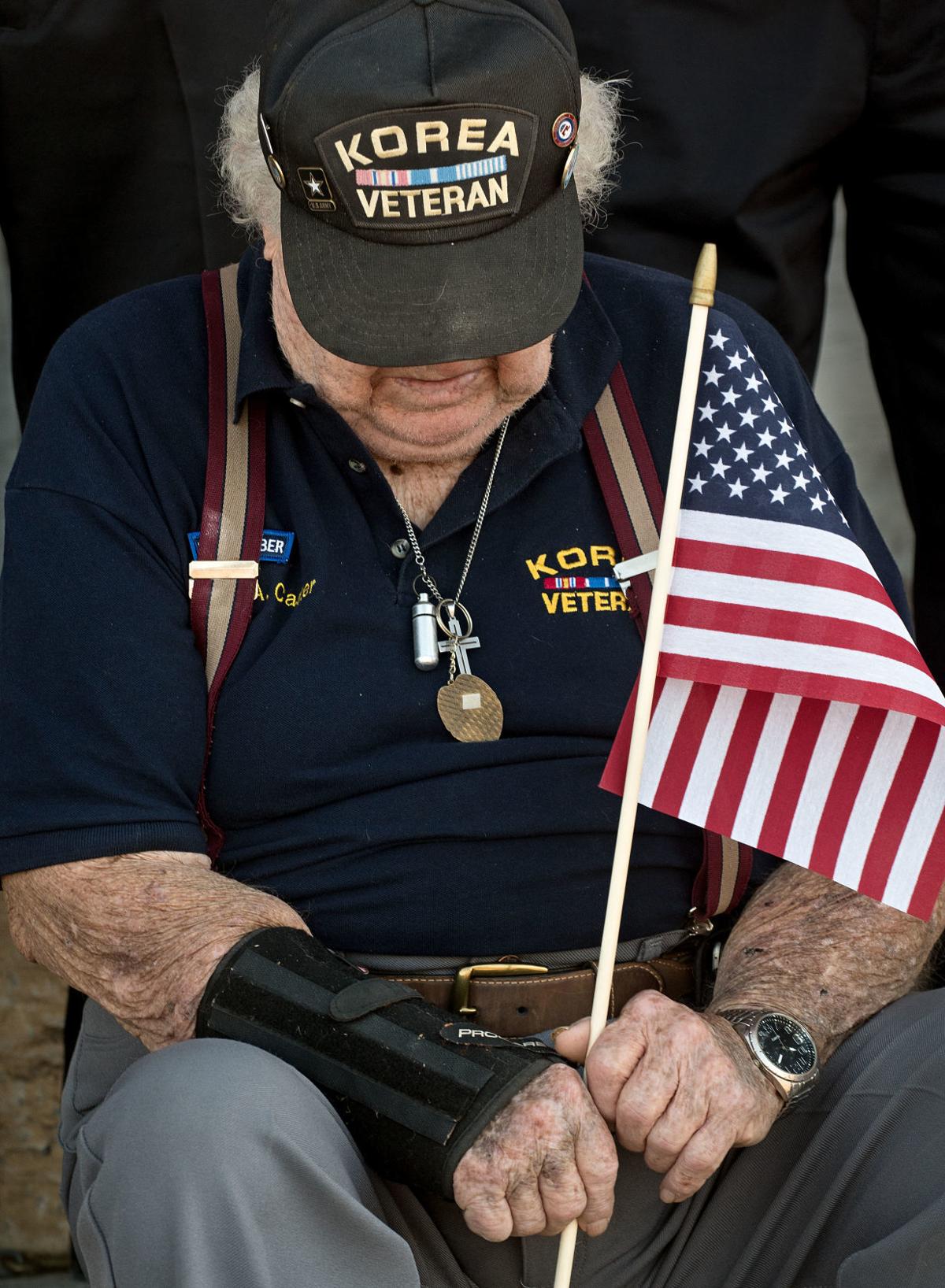 Raymond Carter, 90, a Korean war veteran, bows his head during the opening prayer. 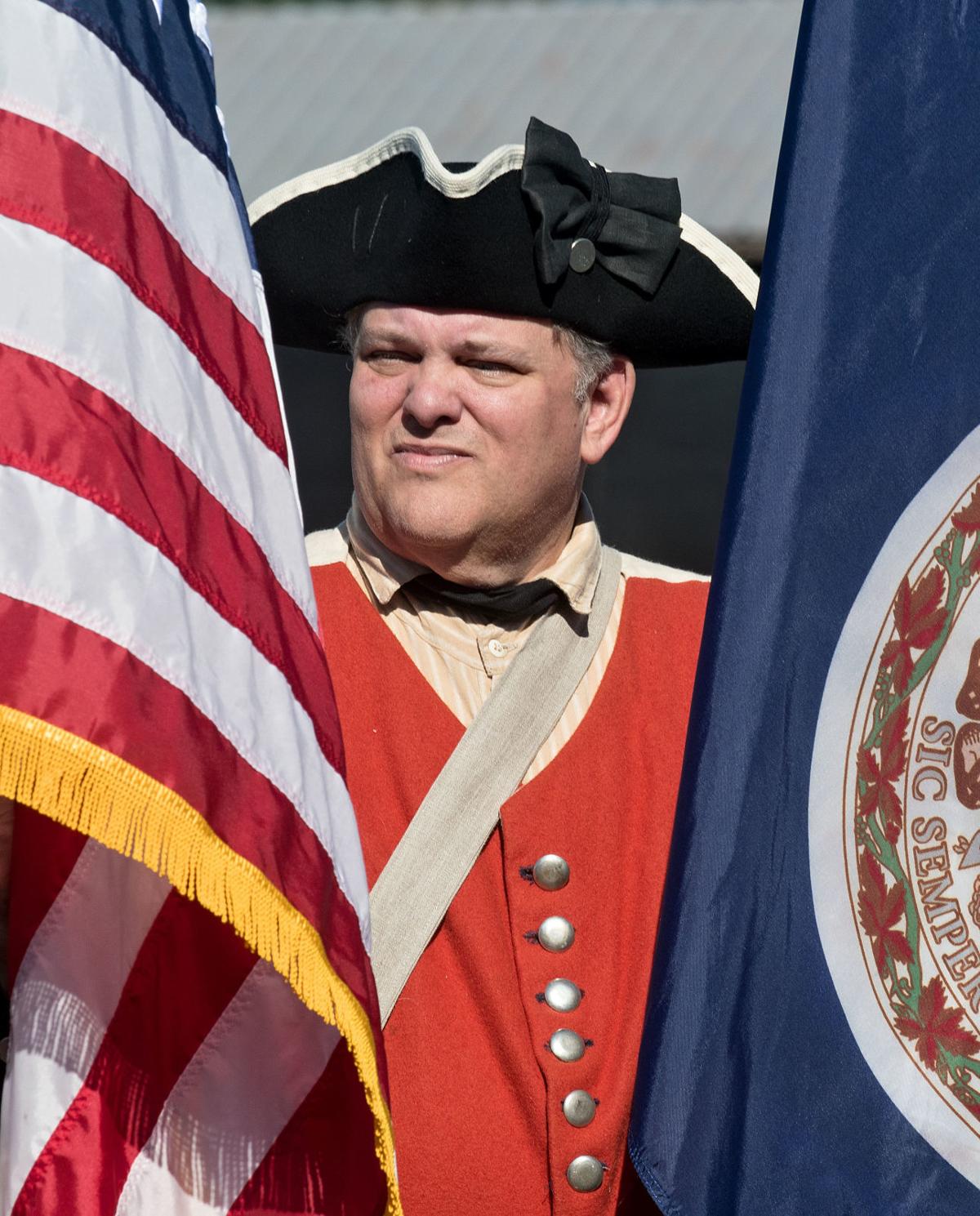 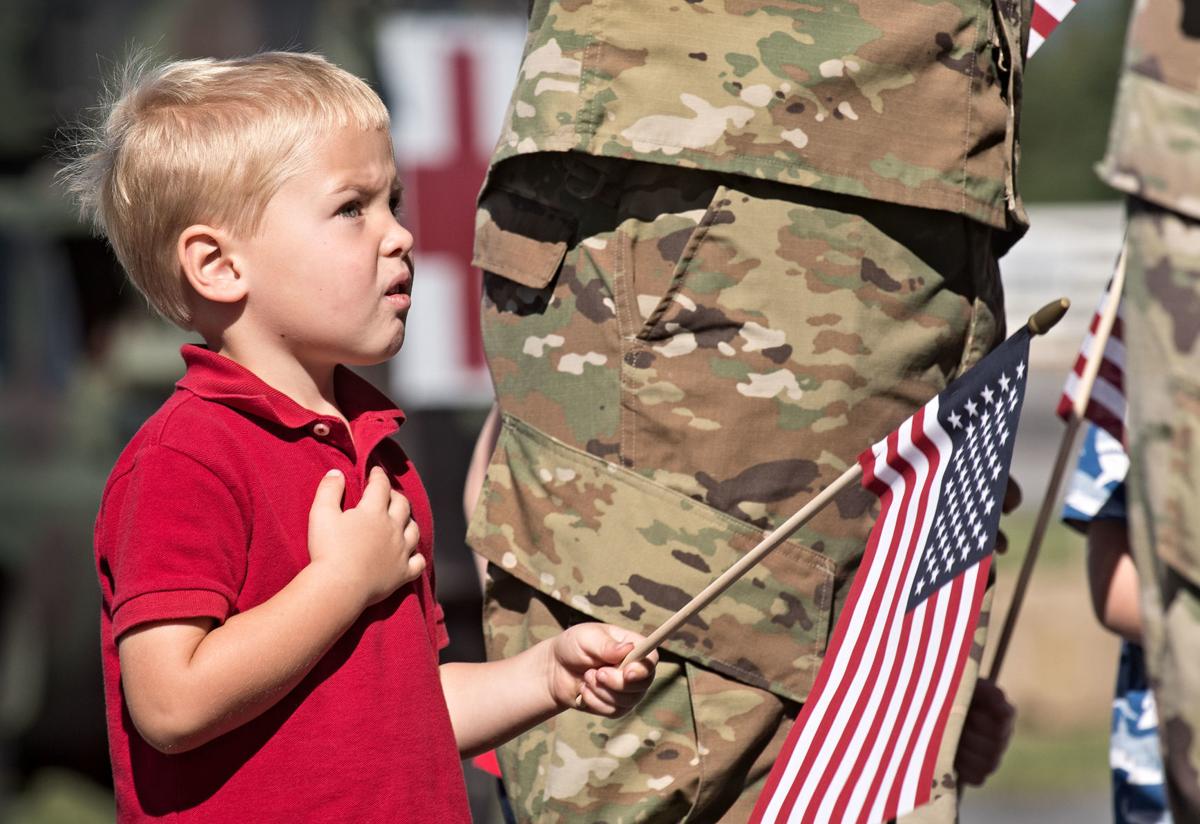 Anderson Pence, 4, of Edinburg, stands during the Pledge of Allegiance. 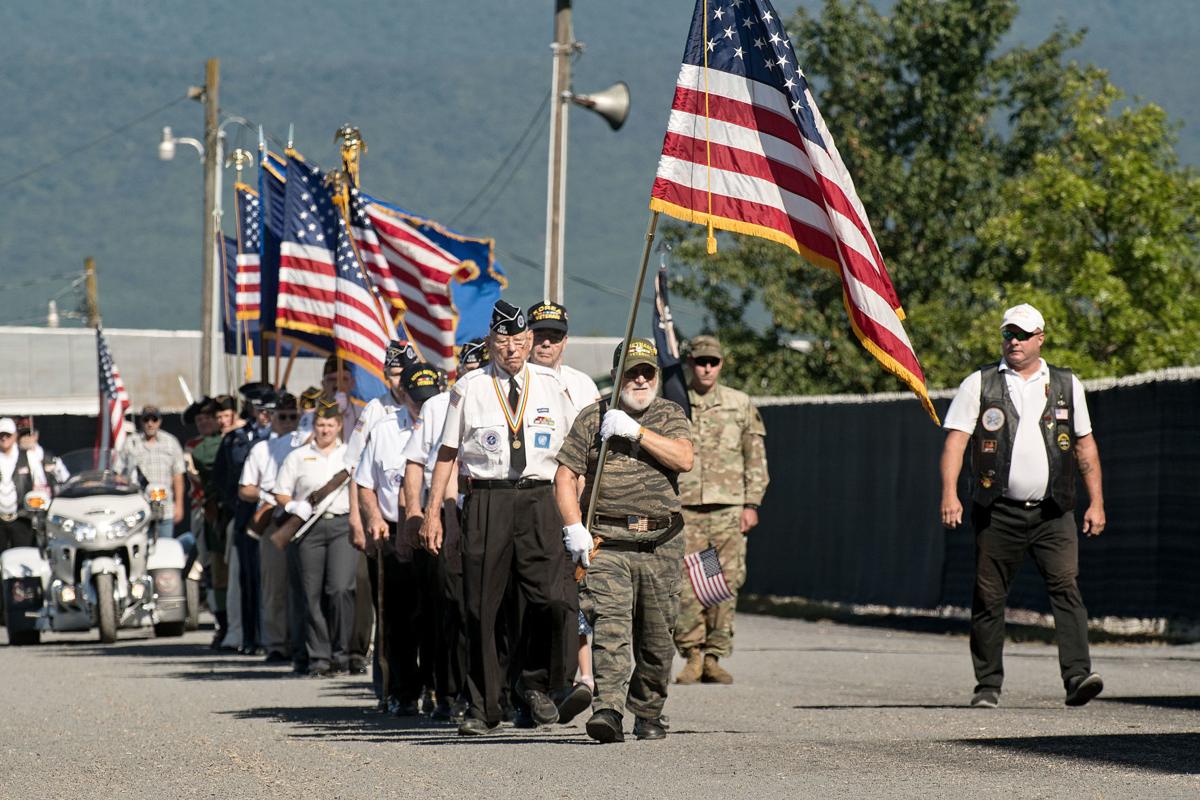 Vietnam veteran Art LaFlamm, of Woodstock,  leads a group of Korean veterans as they parade in front of the grandstand.

Raymond Carter, 90, a Korean war veteran, bows his head during the opening prayer.

Anderson Pence, 4, of Edinburg, stands during the Pledge of Allegiance.

Vietnam veteran Art LaFlamm, of Woodstock,  leads a group of Korean veterans as they parade in front of the grandstand.

WOODSTOCK – Veterans and their families descended on the Shenandoah County Fair to be honored and to honor one of their own during the Veterans Tribute on Thursday.

The yearly event honors the sacrifices of veterans from all e branches of the U.S. Armed Forces. This year’s ceremony included a tribute to retired Lt. Col. Raymond F. “Ray” Powell, the head coordinator of the Veterans Tribute, who passed away in June.

Scott Powell, a former Army captain and Ray Powell’s son, was the featured speaker at the ceremony. He reflected on the values that his father instilled in him, including helping his fellow man.

“One of the last things my dad said to me before he died was 'always serve in some compacity,’” Scott Powell said. “He wasn’t particularly concerned where I served, only that I served.”

Steve Jennings, who took over as the coordinator of the Veterans Tribute after Ray Powell’s death, said that he devoted his life to his country.

“One of the things he taught me about was service,” Jennings said. “That was the number one worry for him. He provided himself, his family, and his God and devoted them all to service to his country, to his church, to his God, to his family and fellow vets that he loved so very much.”

Jennings, a former Marine, said he spoke with Ray Powell before he died about keeping the Veterans Tribute going at the fair.

“I said I would, although I didn’t take orders from the Army,” Jennings said. “[Powell] said ‘I’m not ordering you, Marine. I’m begging you.’"

Scott Powell spoke of the importance of the American military and the positive impact they have had on countries around the world.

“Self-sacrifice in service of others is extraordinary,” he said. “It’s why I so frequently hear ‘Are you an American? Can I take a picture with you? Thank you so much for everything your country has done.’ It’s not often you see the fruits of other American veterans who were over there long before I was.”

Scott Powell said that the veterans in attendance lived their lives in the service of others and he hoped they would pass on their values to the next generation.

“Remind them that freedom wasn’t always free,” he said.

The Shenandoah County Fair will continue through Saturday.