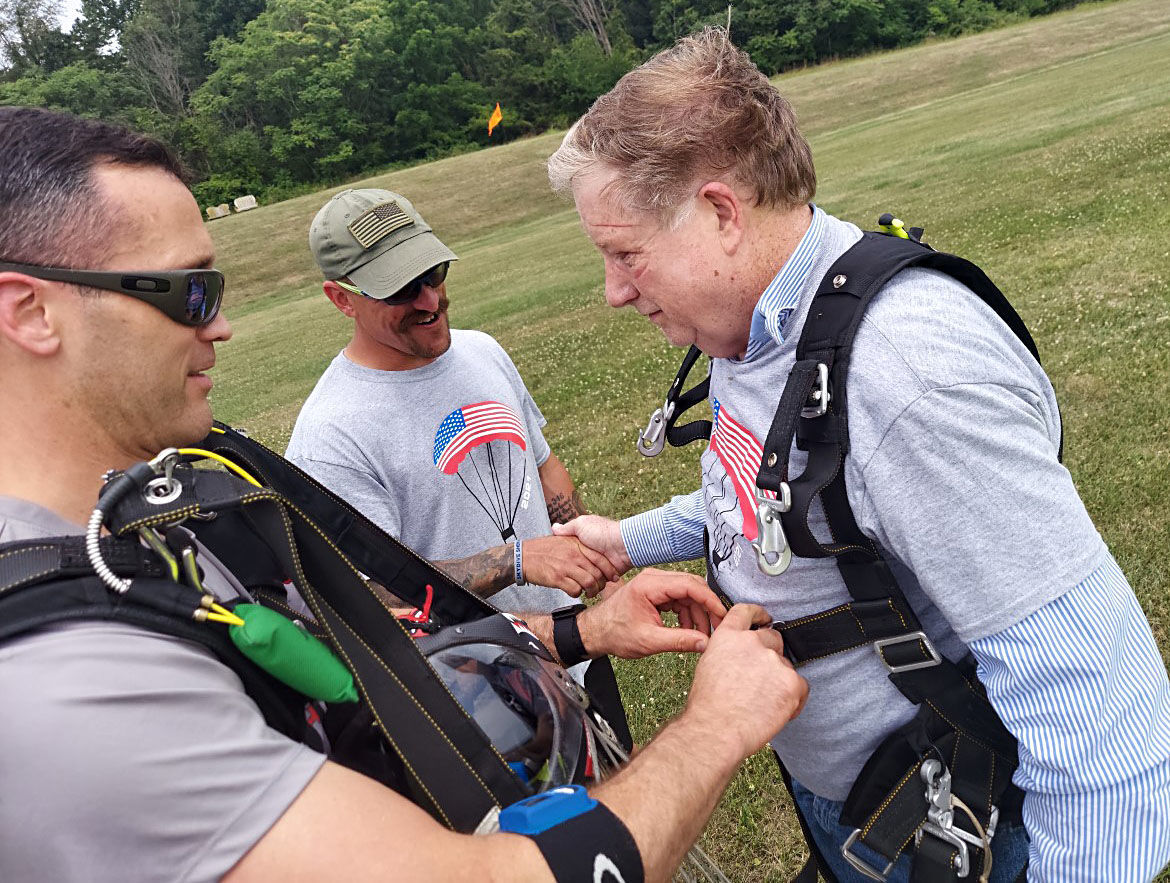 Photos by Charles Paullin / For The Herald

Kevin Whited, 72, of Berryville, right, receives a “Challenge Coin” from Heroes on the River founder and CEO Adam Packham, middle, during the organization’s skydiving event at New Market Airport on Saturday. 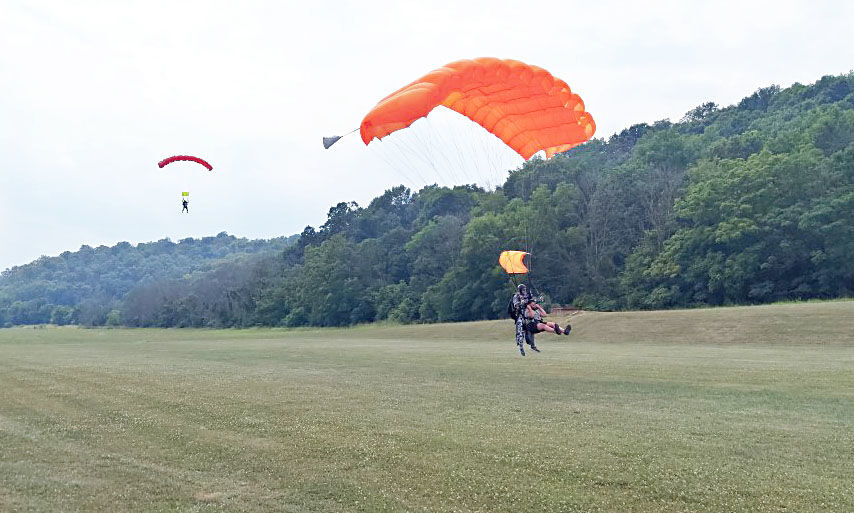 Jackson Parker, a veteran from Alexandria, descends from a skydiving jump with Henrik Jensen strapped to him as part of a Heroes on the River skydiving event Saturday at New Market Airport.

Photos by Charles Paullin / For The Herald

Kevin Whited, 72, of Berryville, right, receives a “Challenge Coin” from Heroes on the River founder and CEO Adam Packham, middle, during the organization’s skydiving event at New Market Airport on Saturday.

Jackson Parker, a veteran from Alexandria, descends from a skydiving jump with Henrik Jensen strapped to him as part of a Heroes on the River skydiving event Saturday at New Market Airport.

They weren’t sure they’d be respected for their military service, recalled the 72-year-old Berryville resident.

No one hid their military service on Saturday when 60 veterans jumped from a Cessna plane flying 11,000 feet in the air during a Heroes on the River event meant to bring veterans together.

“It’s all positive,” said Whited of the skydiving event held at the New Market Airport. “Hopefully, the community supports it.”

Howard Synesael, a 71-year-old from upstate New York, also jumped from the plane named “Shark,” with sharp teeth and imitation bullet holes drawn on the side.

A combat medic in the Vietnam War, Synesael said he jumped from helicopters several times, and wanted to do it again after recently being diagnosed with Alzheimer’s disease.

“I’m traumatized,” Synesael said with a smile painted across his face from the joy of falling from the sky Saturday.

Business sponsorships helped pay for the $175 flight, which allowed for a few seconds of free-fall by the veterans, who were strapped by a harness to a certified tandem skydiver.

After each jump, Adam Packham, founder of the Heroes on the River, went out to greet each veteran with a “challenge coin,” something typically given out in the military as a reward or gift.

“Man, just that coin hitting their hand...takes them back,” Packham said.

The weekend activities featured bluegrass and rock music, free food, a service dog retirement and camping at the airport Friday and Saturday night.

The camping underneath the stars drew Dustin Ford, 42, from Winchester, who served in the Air Force.

“A great event, it’s good to hang out with some other vets,” said Dustin Ford, 42, of Winchester. “Get out, have a good time, relax.”

Packham served on a local veterans board with Skydive Shenandoah owner Rich Winsted. Helping out with the event is a way for Winsted to give back to veterans, he said.

“When they’re in the door, no matter what’s going on on the ground, none of it matters,” Winsted said. “They have a smile on their face. They’re either scared or not and when they land, they’re happy.”

“What he does for the veteran community is nothing short of amazing,” Diaz said of Packham. “It’s an evolving event, and it’s just getting better and better every year.”

The lack of support for some veterans when they return home often leaves them reeling from their experiences, Packham said Saturday. Whether it’s post-traumatic stress from combat or missing the camaraderie, there’s something lacking in their lives, he explained.

The owner of a home improvement company in Winchester, the 42-year-old Packham served in the Army from 1999 to 2002. He began the nonprofit Heroes on the River about four years ago with his wife, Becca.

“I want to take it slow, though,” Packham said. “I want to build it as it grows, not try to rush it.”

But that doesn’t mean he doesn’t want to grow at all. Next year’s goal is to have at least 80 people jump by using a bigger plane, Packham said. He also wants to offer in the future an all-inclusive fishing trip to Florida, complete with custom fishing rods and gear for participants.

“This is the reason we are free,” Packham said. “Is because of the men and women who fought and bled for us, and sacrificed life, limb, their sanity, their families, their relationships. They sacrificed everything, and folks who support that need to be praised.”