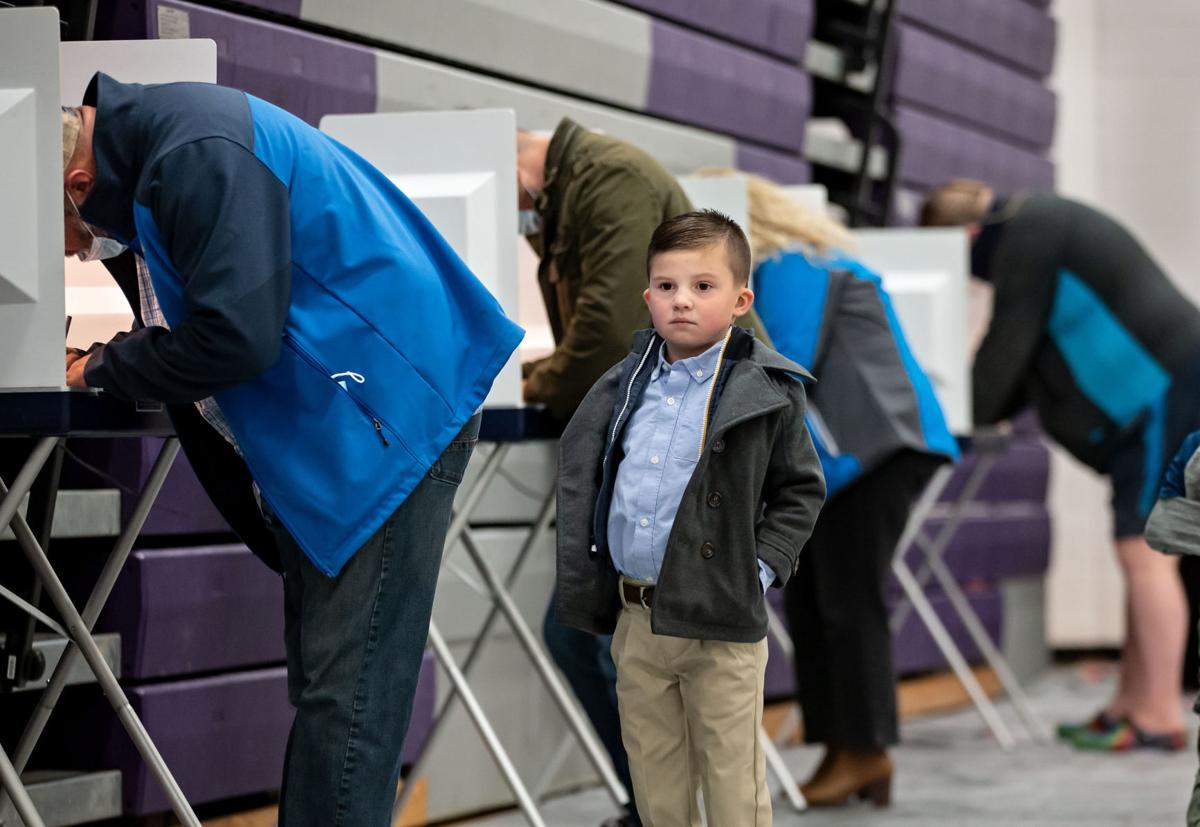 J.P. Lindsey, 6, of Strasburg, looks around the polling station at Strasburg High School while his father Larry Lindsey votes on Tuesday morning. 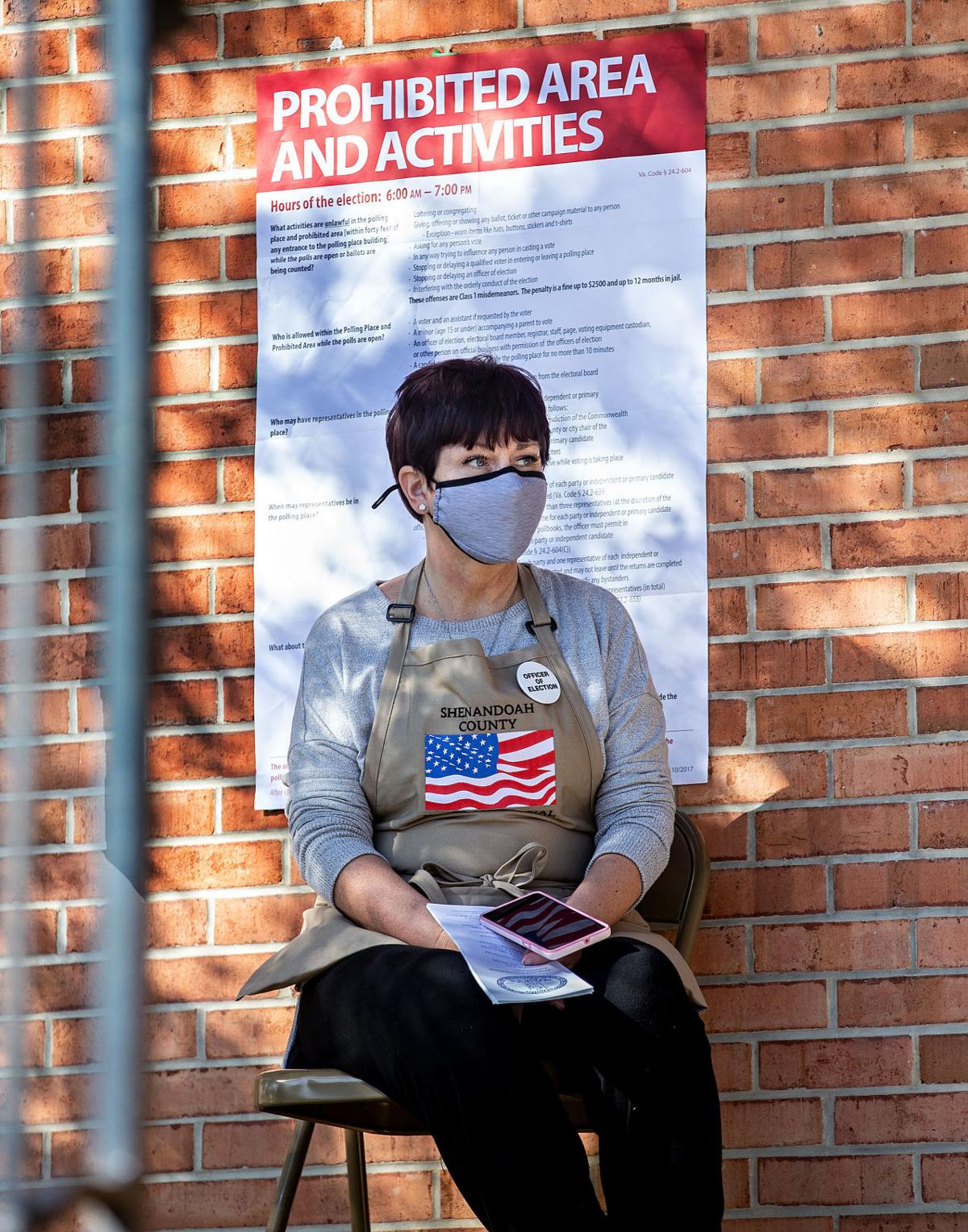 Lori Staley, an election official, sits outside the polling station at the Edinburg Volunteer Fire Department during a break in voting on Tuesday. 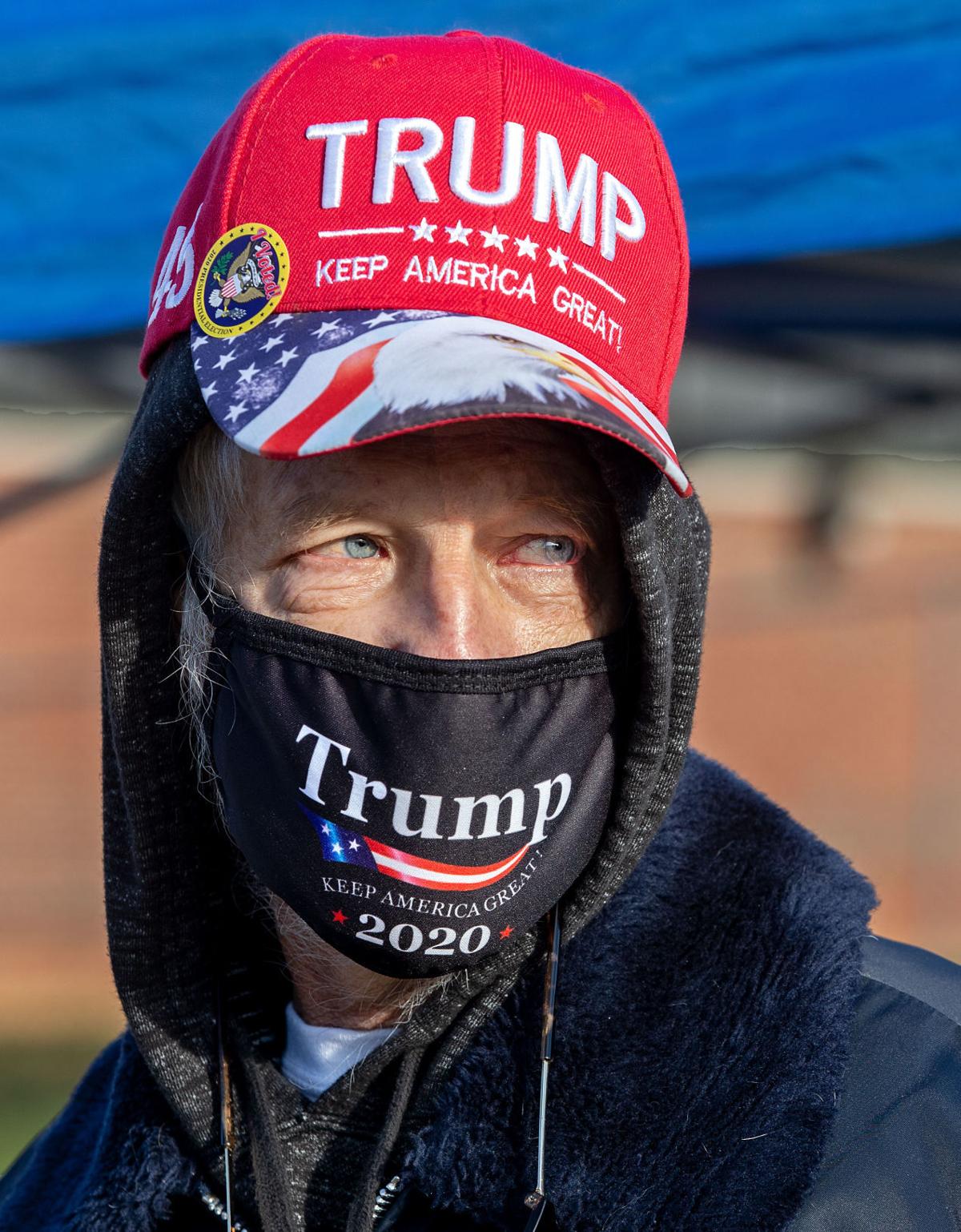 John Bost, chairman of the Strasburg Republican Precinct, dons his Trump attire outside the polls at Strasburg High School. 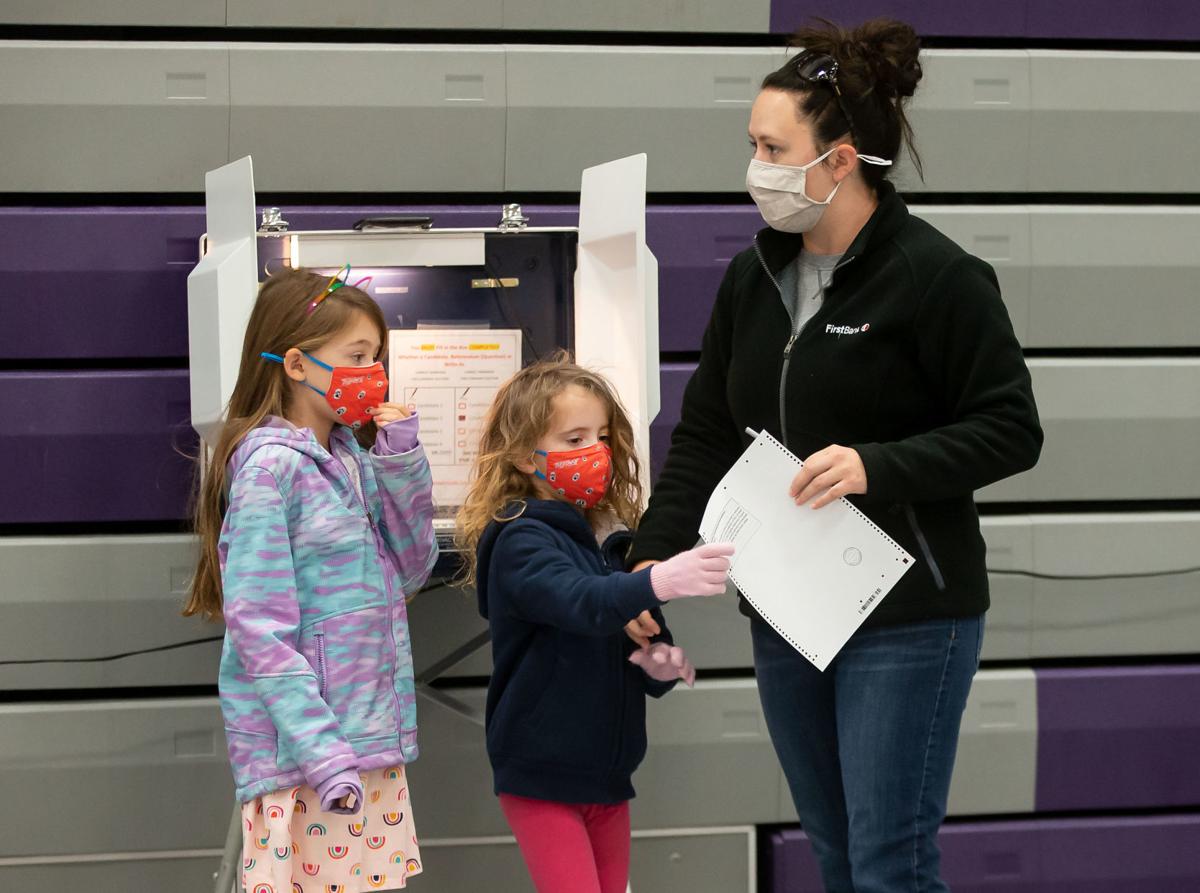 Megan Price and her daughters Chelsea, 7, left, and Amelia, 5, right, leave the booth after voting at Strasburg High School. 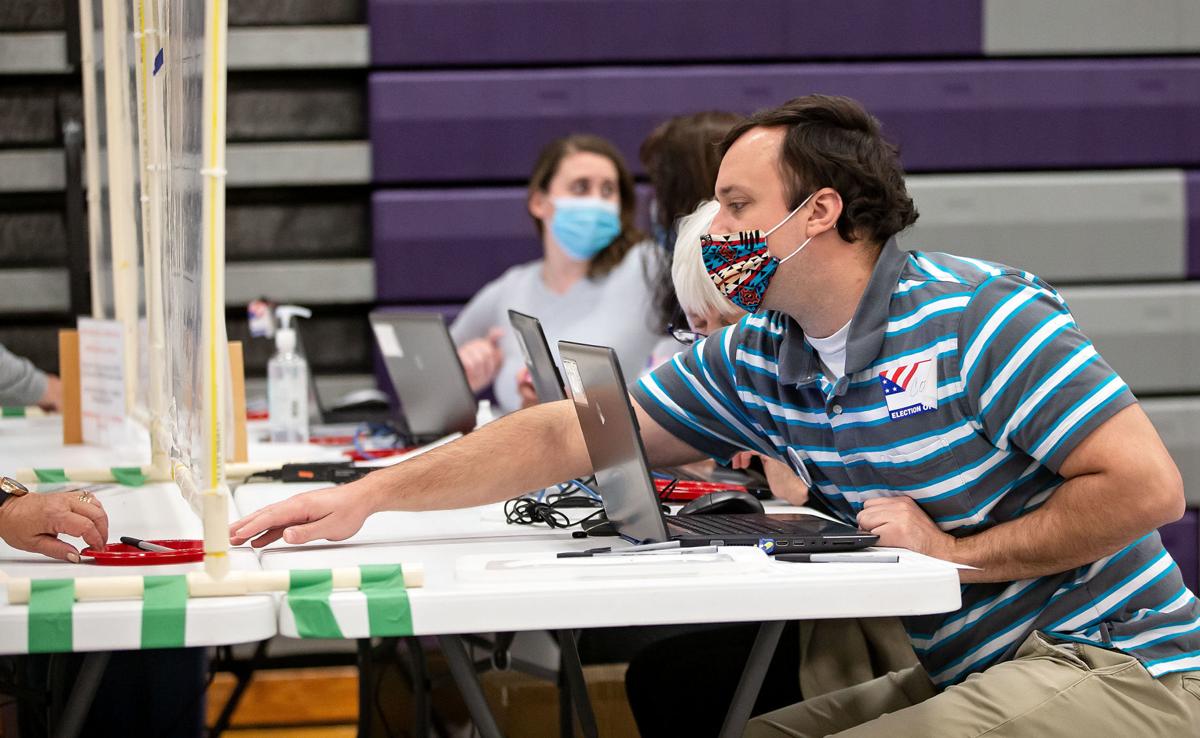 Cody Jones, an election official, reaches for a voter’s ID at the polls inside Strasburg High School on Election Day. 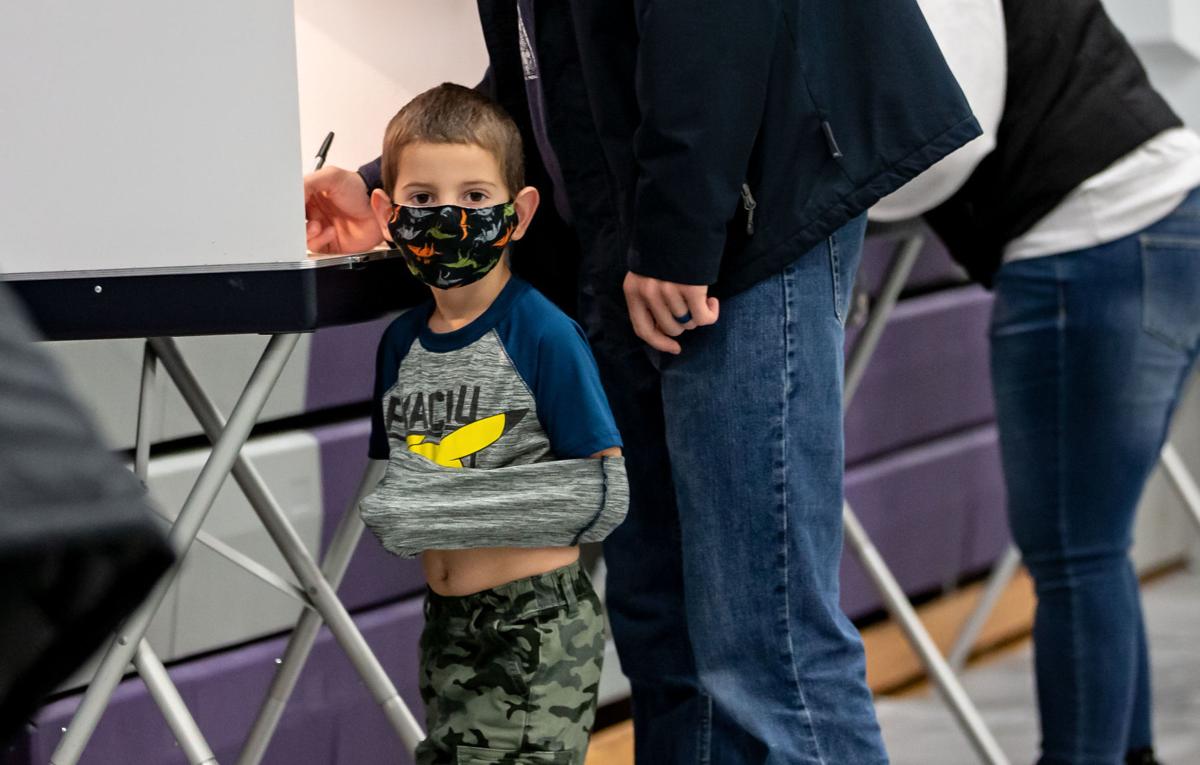 Samuel Walters, 4, of Strasburg stands beside his father, James, during morning voting at Strasburg High School.

J.P. Lindsey, 6, of Strasburg, looks around the polling station at Strasburg High School while his father Larry Lindsey votes on Tuesday morning.

Lori Staley, an election official, sits outside the polling station at the Edinburg Volunteer Fire Department during a break in voting on Tuesday.

John Bost, chairman of the Strasburg Republican Precinct, dons his Trump attire outside the polls at Strasburg High School.

Megan Price and her daughters Chelsea, 7, left, and Amelia, 5, right, leave the booth after voting at Strasburg High School.

Cody Jones, an election official, reaches for a voter’s ID at the polls inside Strasburg High School on Election Day.

Samuel Walters, 4, of Strasburg stands beside his father, James, during morning voting at Strasburg High School.

Election Day is a family affair for George Rathore and his family.

Rathore, of Strasburg, voted along with his wife, Rachel, at Strasburg High School on Tuesday morning. They also had their daughter, Katie, 6, along with them.

It was Rachel Rathore's first time voting and she and Katie posed for photos outside the school afterward.

"I liked it," Rachel Rathore said. "I was really excited. I hope the man I voted for gets elected."

George Rathore said he didn't consider voting early and had no problems coming to the polls to vote on Election Day, despite the COVID-19 pandemic.

"November 3rd is the traditional day and we're going to uphold the traditions that we were raised on," he said.

He added that he feels it's important for his daughter to see how voting works and understand how important it is for when she gets older.

"These are the values and traditions that we raise our families on," he said. "She comes with me every single year when I vote, whether it's for the presidential (election) or if it's for anything else. If I'm coming to vote,  she's always here with me."

George Rathore said he and his wife both voted for Donald Trump for president and for all of the Republicans on the ballot.

Rashine Sturdivant, a Woodstock election official, said they had around 150 people in the first hour and there was a line of people early on but things steadied off after that.

She said there had been no complaints about wearing masks or social distancing.

"I thought it would be a longer of a line, but it went pretty fast," Sturdivant said. "Everything's been great. Everyone's had their masks. We have our booths 6 feet apart and I've been walking around sanitizing the booths. We have plenty of hand sanitizer."

Ron Moomaw, who is a member of the Shenandoah County Electoral Board, said he had been to several polls early in the morning to see how things were going and he was pleased with what he saw.

Moomaw said he voted early at Orkney Springs and things were going well there. He said they have their poll at the fire department and they had to rearrange things so that people could exit a different door than the one they entered in.

Moomaw said he stopped by New Market and things were running smoothly there as well.

"They're at the fire hall and it's a much larger space," Moomaw said. "It's flowing well and everybody's social distancing."

He said things were also going well at Mount Jackson on Tuesday morning.

Moomaw said that over one-third of the registered voters in Shenandoah County voted before Tuesday.

"We're happy to see so many people voting, and we've got a lot of new voters," Moomaw said. "So it's been a little difficult to organize both the early (voting) and the regular."

Shenandoah County Director of Elections and General Registrar Lisa W. McDonald said that she was pleased with how things were going throughout the county.

"I think overall we've done well," McDonald said in a phone interview Tuesday afternoon. "We've had just a few things as usual. We had people who weren't certain if they had updated their registration, maybe went to the wrong precinct and we've gotten them straightened out and back to the right precinct - maybe had to send them to Front Royal or Winchester. And some of that goes on in those areas, too - they're sending them over to us. But for the most part, everyone's going to the right precinct. Overall, knock wood, it's going pretty smoothly."

Rathore said that the voter turnout in Strasburg was the best he has ever seen. He said that he had to wait in line for 30 minutes, at around 6:30 a.m., which was the longest wait he had ever had when voting.

Bob Heltibridle, of Woodstock, said that he was surprised how quickly the voting went at Central High School. Heltibridle, who said he voted for Trump and all the Republicans on the ballot, voted around 7:45 a.m. on Tuesday morning.

"I kind of expected it to be a little bit busier," Heltibridle said. "But with things the way they are it will pick up, I'm sure. This election is very important."

Julia Quezada, of Mount Jackson, said she was a little concerned about being out around people due to the coronavirus, but she made sure to take all the safety measures she could.

"I took the precautions, hand sanitizer, wore a mask," Quezada said. "I know some people didn't and that's up to them. But it's more for me and my family than for them if they don't want to. Everything (at Mount Jackson Town Hall) was done awesome, hand sanitizer, you got to keep your pen. There was no reason not to come and vote."

Christy Balylis, of Strasburg, said she was not concerned about voting on Tuesday with the COVID-19 pandemic going on.

"No, I was not worried because I can wash my hands and take precautions," Baylis said. "Things were going very smoothly. The lines are going quick and people are wearing their masks."

McDonald said she did not hear of any problems with voters following the COVID protocols of social distancing and wearing masks.

"I think everybody's been very agreeable overall and everything's going well," she said. "We started 45 days before the election and did 30 days of early voting at the office, and I can say in here people were well-behaved, polite, very appreciative. I think people by this time have gotten used to the social distancing and everything."

McDonald said that they will not have 100% of the votes in until Friday at noon, but the votes from the precincts will be tabulated Tuesday night and they will be the unofficial results.

She said two new state laws make it impossible to have everything 100% official before Friday. One new law this year is that voters have until Friday to cure their absentee ballot.

"Which means if there's an issue, say they had mailed in their ballots. We had three days to contact them, whether they mailed it in or dropped it off. Or say you forgot to sign it or you put a P.O. box instead of a physical address, that type of thing. So they have until Friday noon to get that cure done so that their ballot can count," McDonald explained.

She said another new law is that absentee ballots that are received by noon Friday also count toward the final vote. McDonald said that in year's past they had to be received by 7 p.m. Tuesday.

Paul Dawson, of Strasburg, said this is an important election for everyone to vote.

"I came out and voted today because I think people have an opinion and I think it should be made," Dawson said. "It's very important."

Quezada declined to say who she voted for but said it's important that everybody votes and makes a difference.

"It doesn't matter what you say - if you don't go out and vote it doesn't really matter," Quezada said. "There's a lot on the line. Everyone has a right to their opinion, but human decency is needed in this time."

Sturdivant said she voted early and voted for Democrats across the board, including Joe Biden for president.

"America is going to decide who it is," Sturdivant said. "So at the end of the day, let the better person win and that's how I see it."

Rathore said that things were peaceful at Strasburg and everyone was getting along no matter who they were voting for.

"Everybody's being civil, no one's taking things out of context in there," he said. "Regardless whether you're from Strasburg or Shenandoah County or Republican or Democrat, everybody out here seems to have some sort of decency amongst each other, not like what you see in the big cities."

In addition to casting a ballot for president, Shenandoah County voters were asked to say yes or no to two state constitutional amendments, select U.S. Sen. Mark R. Warner, a Democrat, or his Republican challenger Daniel M. Gade, and cast a ba;;6th District House of Representatives Congressman Ben Cline, a Republican, or Nicholas Betts, a Democrat,