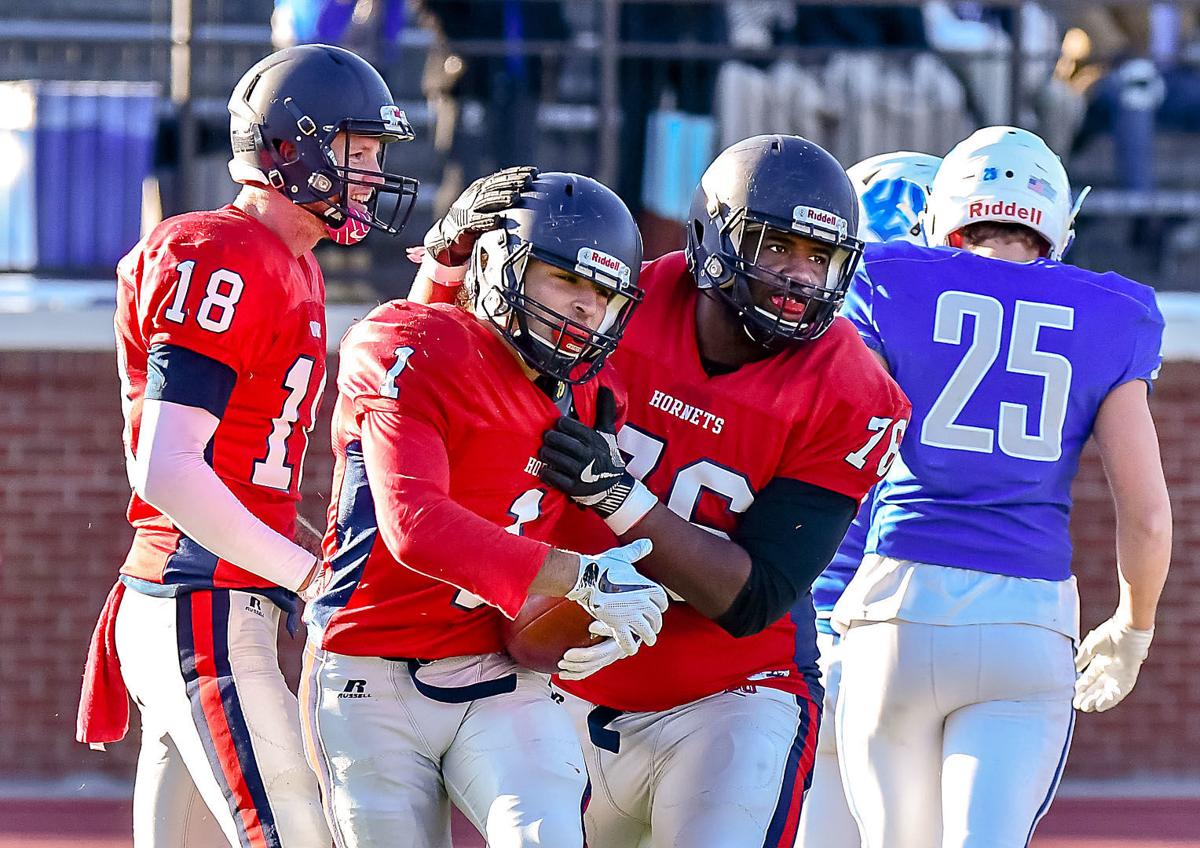 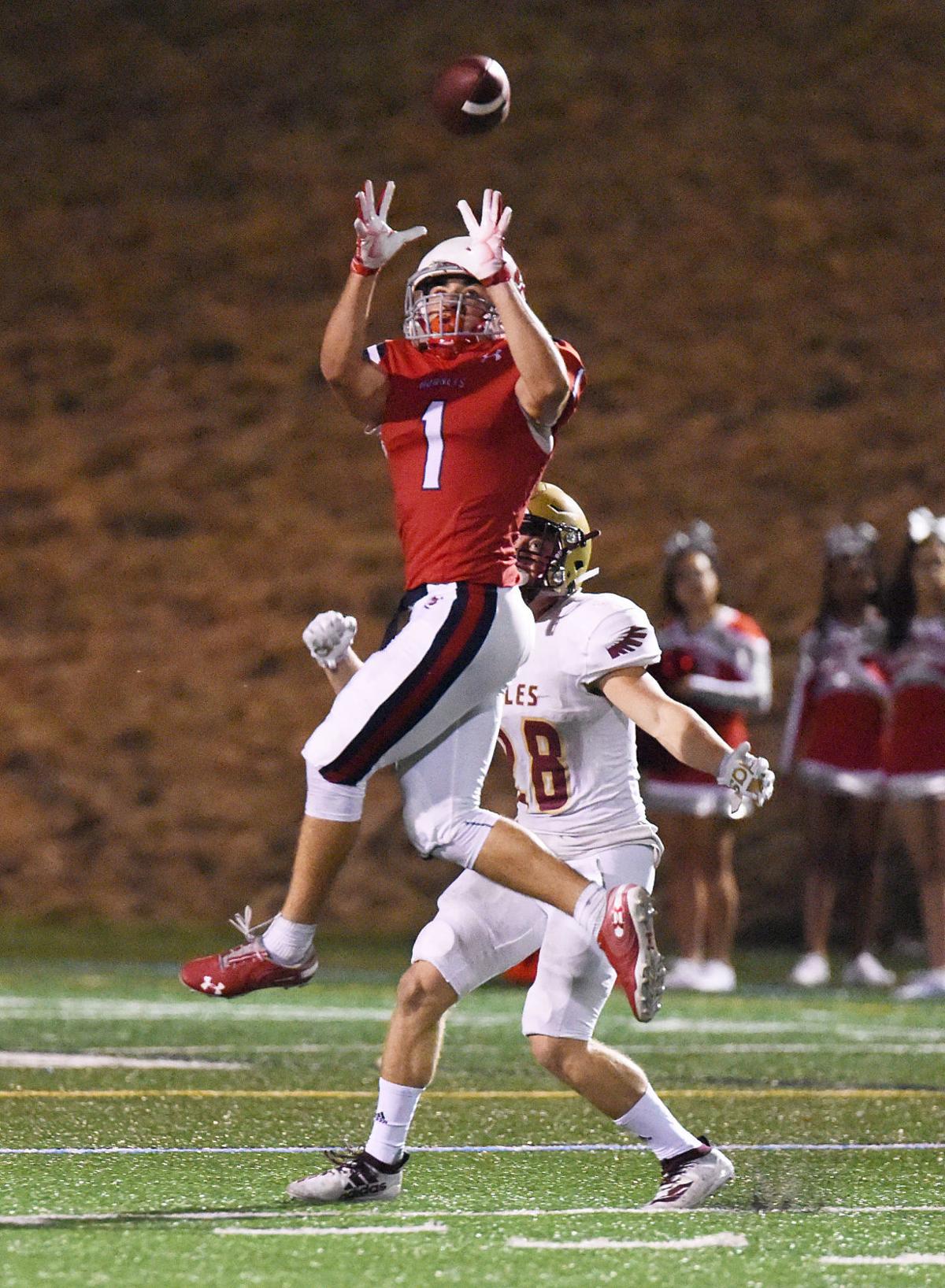 WINCHESTER – Jake Wallace gets a reminder every day as he pulls on his jersey with the number 1 imprinted on it before hitting the field for football practice or on game days.

To Shenandoah University’s junior wide receiver, that number carries a little extra weight. Wallace had never worn the No. 1 before his sophomore season at SU in 2018, and so it had no special meaning to him in particular, but he knew of past Hornets who had donned the number.

Fellow receiver Rico Wallace (no relation), Shenandoah’s all-time leader in career receptions, receiving yards and receiving touchdowns, wore that number for the last three seasons of his illustrious SU career before getting signed by the NFL’s Carolina Panthers in 2012. Cedrick Delaney, Shenandoah’s all-time leading rusher, also wore No. 1 during his senior season in 2016.

When Shenandoah’s coaches asked Wallace, who wore No. 83 as a freshman in 2017, before his sophomore season if he wanted to wear No. 1, his mind flashed to that Austin highlight tape. He remembered thinking at the time, “That’s the standard.”

It might be tough to find anyone in Shenandoah’s football program who doesn’t feel Wallace has earned the right to wear the number most associated with excellence.

Head coach Scott Yoder called Shenandoah’s slot receiver a “dude” and went so far as to call Wallace probably the best football player on SU’s entire team, one who often doesn’t garner the appreciation he deserves. Offensive coordinator Stan Hodgin said Wallace is a “professional in every aspect of the word” and is as self-motivated as anyone on the Hornets’ roster. Junior quarterback Ben Agostino called Wallace the smartest player in SU’s offense.

As Hodgin put it, Wallace brings the high level of work ethic to everything he does – on and off the field – that the coaches want every Hornet to emulate, a sentiment Yoder echoed when he said Wallace is “everything you want a Shenandoah player to be.”

“He’s a very kind of hardhat, lunch pail kind of guy,” Agostino said. “He’s not a ‘rah-rah,’ gonna pump the team up with a speech, but you just go out and watch him play and you’re inspired because of how hard he works and what he does on a day-to-day basis.”

Wallace, a Virginia Beach native and a graduate of Frank W. Cox High School, is now firmly entrenched as one of Shenandoah’s top targets in a high-flying passing game that took flight behind the right arm of former standout quarterback Hayden Bauserman. But Wallace, who’s listed at 5-foot-10, 185 pounds, had to prove he could be an effective college receiver.

As a freshman in 2017, Wallace caught 20 passes for 188 yards and a touchdown in nine games. His breakout came in Week 3 of 2018 when he hauled in 14 receptions for 195 yards and three touchdowns in a loss to Hobart, a performance that brought a smile to Yoder’s face even with the sting of defeat against his alma mater still very fresh moments after the final whistle.

“It definitely built my confidence in knowing what I can do in this league, because being kind of an undersized guy you have doubts,” Wallace said of that game, during which he tied the school record for receptions and put up SU’s second-highest single-game receiving yards total. “All my life people have said I was undersized and all that kind of stuff, so showing what I could do and showing myself what I could do really just kind of put my head up a little bit and said you can actually play at a high level, you can make plays in tough situations, so you’ve got to keep building off that.”

Wallace went on to lead Shenandoah in receptions (63) last season and ranked fourth in the Old Dominion Athletic Conference in receiving yards (687) while catching five TD passes, numbers that landed him on the All-ODAC third team. This fall, with Shenandoah’s offense trying to find a new identity under a new starting quarterback, Wallace has 20 catches for 213 yards in three games.

While the “splash plays” in Shenandoah’s passing game usually come from the Hornets’ outside receivers, Hodgin said everything starts with the “H” receiver, the interior guy on the right side of SU’s formation. Hodgin likened Wallace’s role to that of former NFL receiver Wes Welker during his time with the New England Patriots.

“The position that (Wallace) plays is certainly a focal point of the offense,” Hodgin said. “The offense is kind of geared around that position as far as from the receiving corps. His skill set, he’s probably the most versatile that we’ve had at that position since we’ve been here. He’s got some wiggle. He can catch the screen and make a guy miss. He can go over the middle. He’s a tough kid, doesn’t mind catching the ball in traffic. He certainly has good enough speed to stretch the field vertically. He has a unique skill set and I think, again, it’s a tribute to him developing his own skill set.”

Playing in the slot, particularly as an undersized receiver, requires a particular “football savviness” when going up against defenders “twice my size,” Wallace said. When catching balls over the middle of the field, Wallace said he has to be aware of what’s going on around him, adding that you have to be “very tactical in your moves in how to avoid certain situations,” such as an unwanted collision with a linebacker or safety.

“He’s really good at using his body and understanding how to manipulate a defender to create more space for himself,” said Yoder, who was a receiver during his own college playing career at Hobart. “You see him when he catches the football. He’s rarely taken down by the first guy. I don’t think when you think speed on our team, Jake Wallace probably isn’t the first guy you think of but you hardly ever see the first guy take him down, you hardly ever see a big hit on him because he’s pretty slippery.”

Wallace has shown he can be a deep threat – in the home opener against Bridgewater two weeks ago, for example, he caught a pair of 30-yard passes from Agostino down the seam – but Wallace’s even more valuable as a reliable target around the sticks in situations where Shenandoah needs a first down.

Wallace said he’s always been that go-to guy in the passing game dating back to his high school days at Cox, where his dad, Wayne, is the team’s offensive line coach.

“That just goes back to me and my dad, he’s always been telling me ‘You’ve got to make these plays,’” Wallace said. “Every team has someone they look to in high-pressure situations, and you want to be that guy.”

And if Wallace’s reliability and versatility as a pass-catcher weren’t enough, Yoder said Wallace – who also returns punts and is the team’s holder on the field goal unit – is the team’s best perimeter run blocker. Wallace, who said sometimes it’s nice to “get your nose to the grindstone” as a blocker rather than making the glory-grabbing plays as a receiver, developed that skill from his father, as well.

“He’s in there throwing haymakers with linebackers to spring our running backs,” Yoder said of Wallace’s blocking ability. “I mean that’s a big deal.”

Entering today’s home game against Southern Virginia University, Wallace had 103 receptions, 1,088 yards and six touchdowns in his Shenandoah career. At the pace he has set since the start of the 2018 season, Wallace – who spoke only of team success and staying humble in the face of his individual accomplishments when discussing his goals – would challenge Rico Wallace for SU’s career receptions record and would rank second all-time in receiving yards.

“The only thing that’s gonna hold him back is us,” Yoder said. “Honest to goodness, the big part about moving forward is how can we get him the football? Sometimes just structurally it’s easier to get the ball on the outside to guys, just hard-calling it, but how can we get him the football consistently early on? I think the only limit to him is the structure of our offense and can we distribute to him enough? Because he’s that good of a player.”