Attendees listen to speakers during a common-sense gun reform laws rally hosted by the Warren County Democratic Committee at the gazebo on Main Street in Front Royal on Saturday. 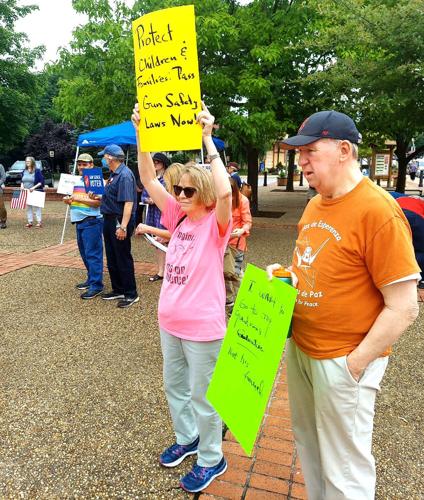 Rea and Tom Howarth hold signs during the rally. 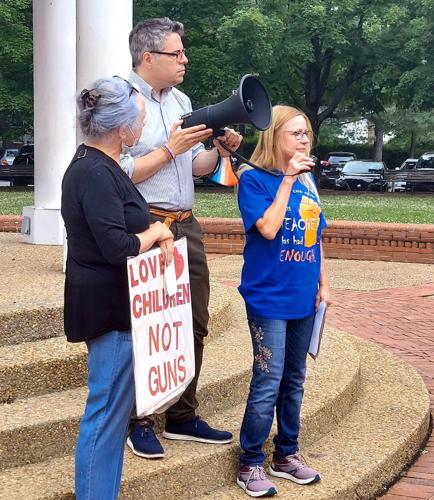 Attendees listen to speakers during a common-sense gun reform laws rally hosted by the Warren County Democratic Committee at the gazebo on Main Street in Front Royal on Saturday.

Rea and Tom Howarth hold signs during the rally.

FRONT ROYAL – It started out by reading the names of the victims of the Robb Elementary School shooting in Uvalde, Texas, the Tops grocery store shooting in Buffalo, New York, and the hospital shooting in Tulsa, Oklahoma, within the last month.

Nancy Smith, a former elementary school teacher, fought back tears as she read some of those 35 names during the start of a common sense gun reform laws rally held at the Main Street Gazebo in Front Royal on Saturday afternoon.

“I know these children and it just breaks my heart,” Smith said before reading the names. “It’s got to stop.”

Rebecca Altizer, of Warren County, read the other names of the victims before reciting poetry by Amanda Gorman, the poet who spoke at President Joe Biden’s inaugural address in 2021. The poetry spoke to not ignoring pain and giving it purpose by acting on it.

“I think that’s what we're doing by showing up today and all over the country,” Altizer said. “Enough is enough, is enough.”

About two dozen people attended the rally organized by the Warren County Democratic Committee that sought to promote common sense gun reform laws that have been advocated for in the wake of the recent shootings.

"March for Our Lives" rallies were scheduled to be held around the country Saturday, with one in Harrisonburg.

The requested gun reform laws include expanding firearm purchasing background checks, raising the minimum age to purchase an assault rifle from 18 to 21 and implementing red flag laws, explained Paul Miller, chairman of the Warren County Democratic Committee and emcee of the gathering.

The National Rifle Association, which has advocated against gun reform laws, is not as strong as it was when the 2012 Sandy Hook Elementary School shooting in Connecticut occurred, Miller said.

How a child deals with the stressors of potential gun violence was unimaginable to Miller, he said, adding he's sure a person who perpetrates the shootings wished someone had intervened to stop them from happening.

“I don’t care what party you vote for, call your congressman and say you want gun reforms,” Miller said. “It’s not a betrayal of the party, your background, the culture, your family. It’s really embracing loving your community.

The crowd in Front Royal included a speech from Mike Fox, the state legislative leader for the Virginia chapter of Moms Against Action for Gun Sense in America, who lives in Albemarle County outside of Charlottesville.

Americans as a whole, including Republicans, gun owners and rural Americans support the requested gun reform laws, Fox said as his wife Katie spoke about the red flag law process.

In Virginia, the red flag law - or substantial risk order - process for people who show signs of harming themselves or others and aren’t voluntarily willing to give up their firearms begins with presenting a case to law enforcement or the commonwealth’s attorney’s office, Katie Fox explained.

When the case is presented, the firearms are removed for up to 14 days. At the end of that period, the order can be challenged and a judge decides to return or remove the firearms from the home for a period of up to six months, Katie Fox said.

“In that time, that person has space to go find help, be it mental help, financial help, whatever they need to get through their crises,” Katie Fox said. “That is the point of a substantial risk order, is to mitigate crises so that someone doesn’t take their lives.”

Fox added she is a victim of gun violence and was a classmate of a Warren County High School student who took their own life with a gun in 2006.

The reforms aren’t about taking away people’s right to bear arms, said Rea Howarth, of Warren County, who attended the rally to advocate for safety in the community alongside her husband Tom. The two held signs, one of which said, "I want to Go to my grandson's Graduation. Not his funeral," with the word "Graduation" underlined."

Having a safe community needs the enacting of the requested gun reform laws that research has proven to be effective and should include safe storage of firearm regulations, Howarth said, acknowledging there’s no blanket law that will address the issue.

Pastor Ingrid Chenoweth, of Good Shepheard Lutheran Church in Front Royal and a former teacher, also spoke at the rally, reciting scripture about Abraham sacrificing children that she said may be more of an example to love children and innocent people more than anything else, rather than a demonstration of his faith.

Society has sacrificed children by failing to enact policies to lift families out of poverty, refusing to invest in education, deciding that mental health care is too expensive and that untrained 18-year-olds are too young to drink alcohol or rent a car but can possess a weapon of war, she said.

“There is nothing more precious than the life of a child. Nothing,” Chenoweth said. “There is nothing more important for us as a society than ensuring that our kids are safe and that they can grow to their full potential. When in order to survive in their schools, our kids have to cover themselves in the blood of a murdered classmate and pretend to be dead… then we are way, way off course.”

this is a mental health issue not a gun issue but the democrats would rather talk about anything other than reality , inflation, gas prices open borders , fentanyl overdoses, high crime and let’s not forget defund the police.