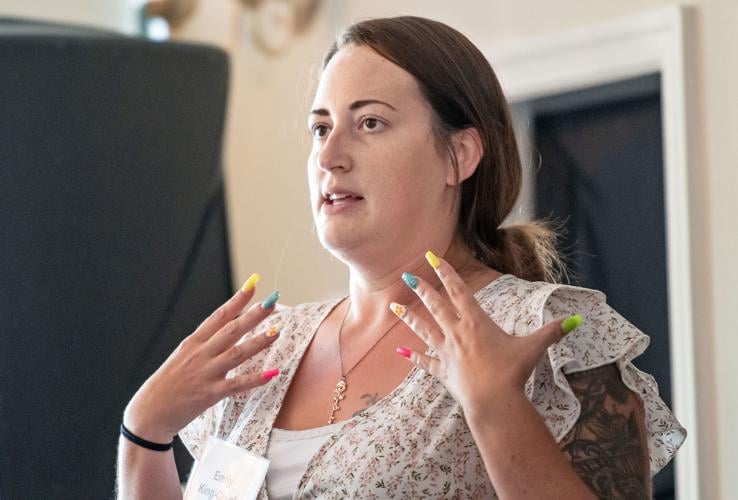 Emily King-Quick, 27, of Winchester, a recovering addict, speaks about how the drug court program in Winchester turned her life around during a luncheon held for community leaders at the Front Royal Golf Club Tuesday afternoon. The luncheon helped to explain Warren County’s proposed Drug Court initiative and how community leaders can help support the program. 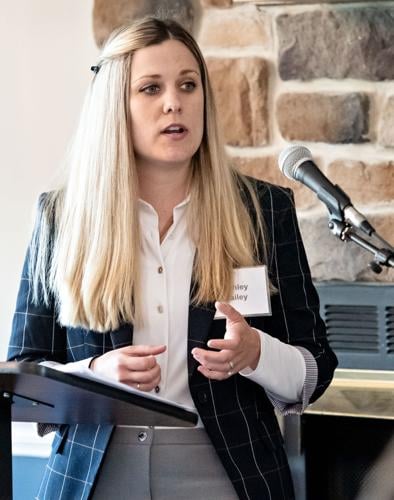 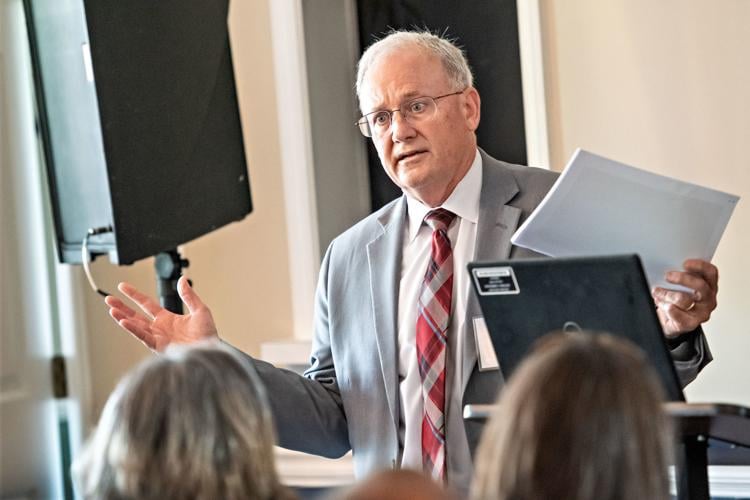 Emily King-Quick, 27, of Winchester, a recovering addict, speaks about how the drug court program in Winchester turned her life around during a luncheon held for community leaders at the Front Royal Golf Club Tuesday afternoon. The luncheon helped to explain Warren County’s proposed Drug Court initiative and how community leaders can help support the program.

FRONT ROYAL — In 2004, Emily King-Quick was affected by her parents’ divorce to the point that she harmed herself, started using drugs and was eventually caught selling drugs to an undercover police officer.

The proceedings of her case in the court system led to her entry into a drug court program. King-Quick, 27, said she relapsed three times as she was a victim of an addiction that left her wandering in life.

It took her about a year to get serious about sobriety.

Now as her three-year drug court graduation anniversary is days away, King-Quick said the program “gave me that extra push.”

King-Quick shared her story with several Front Royal and Warren County officials and community members at a luncheon at the Front Royal Golf Club Tuesday afternoon. The purpose of the luncheon was to discuss the status and goals of the anticipated local drug court.

Her father introduced King-Quick, noting that she’s a mother now.

“I truly believe this, the drug court has saved my daughter’s life,” Kenneth King-Quick said.

The drug court program is not an actual court, but instead a docket within the court system. Participants initially meet weekly with the judge overseeing drug court.

Drug court provides intensive treatment and supervision of eligible defendants who enter the program as part of a plea deal agreement for their offense, Chief Area Public Defender Tim Coyne explained at the luncheon.

It’s for “high risk” offenders who have failed with previous treatment and could benefit from the high demands of the program. It is not necessarily for regular users who could benefit from another diversionary program. A $900 fee from participants is required.

There were almost 1,300 referrals drug court programs statewide, according to a 2020 report. Of those, 526 were accepted, showing the strict entry requirements, Coyne stated.

An average participation length to graduate was 651 days or about 22 months, Coyne added. The average length of termination came after 321 days, which still allowed participants to benefit from tools learned in the program, he said.

The recidivism rate — how likely a person is to commit an offense again — after graduation was 15.6%, and 27.4% for those who were terminated, Coyne said

The statewide Virginia Department of Corrections recidivism rate in 2015 was 23.1% and 25.7% for all offenses in District 11, which covers the counties of Frederick, Clarke, Warren and Shenandoah and the City of Winchester. The recidivism rate was about 36% in the Harrisonburg area, which also recently started a drug court program.

Drug court provides an annual statewide cost saving of almost $12 million. Coyne said regular incarceration and supervision at Rappahannock-Shenandoah-Warren Regional Jail costs about $31,000 annually per defendant — or about $85 per day.

The Centers for Disease Control in November estimated that a little over 100,000 overdose deaths occurred nationwide in a 12-month period ending in April 2021, Coyne added. That’s the first time 100,000 deaths were eclipsed, Coyne said. He noted that’s mostly from opioids, including synthetic versions such as fentanyl, which is now getting mixed with methamphetamine and cocaine.

In 2011, the Northern Shenandoah Valley had one overdose death, which climbed to 21 in 2013 and 53 in 2020. The isolation of the COVID-19 pandemic helped lead to that increase, Coyne noted. He added that the number of non-fatal overdoses has increased due to the use of the life-saving Narcan reviving medication. The Virginia State Police annual crime report stated in 2018 there were 281 drug offenses and 283 in 2019 in Warren County, Coyne added. He noted those statistics do not include offenses such as larcenies that result from users wanting to pay for their addiction habits.

“The bottom line is…drug treatment court programs work,” Coyne said, while acknowledging, “They’re not perfect…they’re not going to be a panacea to every problem.”

The push for the Warren County program began in 2020 when Front Royal Councilman Gary Gillispie contacted Warren County Supervisor Delores Oates to see about starting one. The two, along with Coyne, Warren County Commonwealth’s Attorney John Bell, the Northwestern Community Services Board, Valley Health, local law enforcement leaders and recently retired Judge William Sharp have been working on it since. Sharp’s replacement, Judge Daryl Funk, has said he is committed to establishing the program.

The committee is currently working out the details of appointing a coordinator, who would help with getting the program approved by the Supreme Court of Virginia.

Addiction, which is a result of a genetic predisposition for about 40-60% of people dealing with it, changes the brain’s reward and decision-making functions to fill a void, explained Ashley Bailey, the current regional drug court coordinator with the Northwestern Community Services Board for the Winchester/Frederick and Harrisonburg/Rockingham and Page programs. Addiction causes people to seek substances to complete regular tasks for the rest of their life, Bailey explained.

“So, recovery is a lifelong process,” she said.

King-Quick said the horrible things she did while in the depths of addiction would stick with her. But the drug court helped her become — and realize that she is — a better person, she said. She can buy groceries, has proudly filed her own tax returns and doesn’t spend her income on drugs, she said.

“I don’t have to sit in that anymore,” King-Quick said. “It’s the little things I’m appreciative of today.”