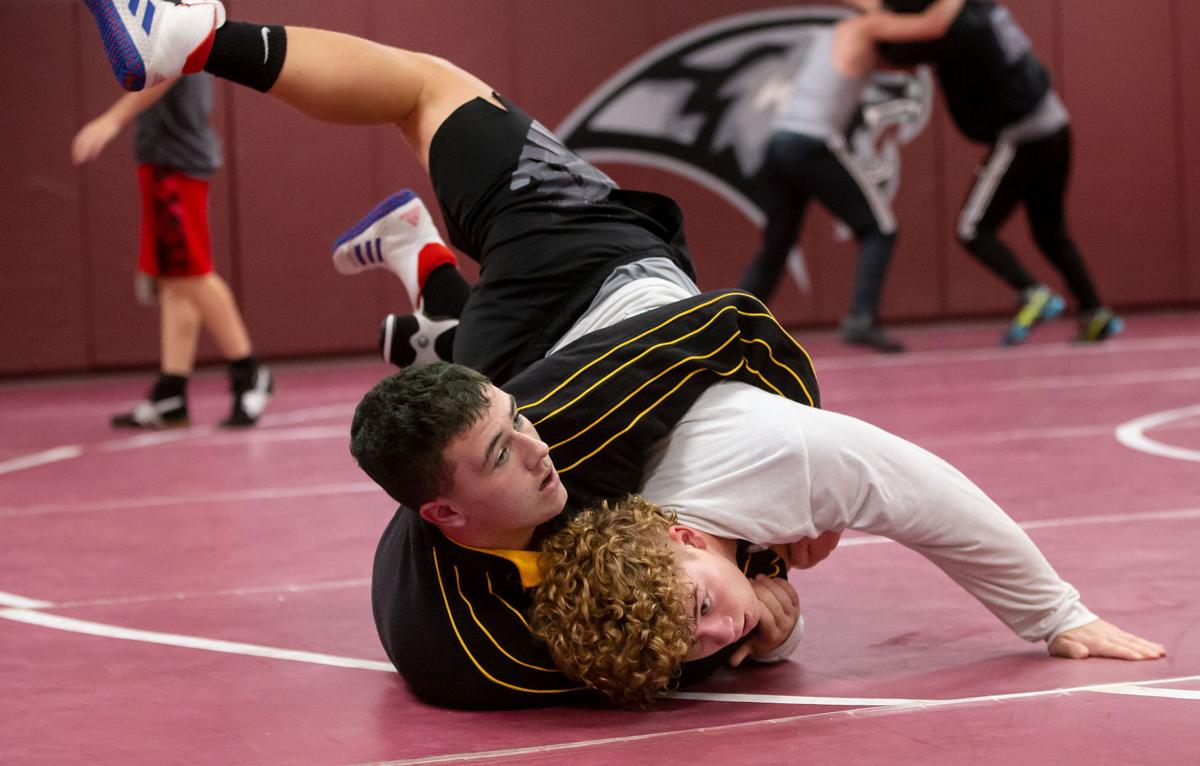 Warren County’s Wes Merchant, left, spars with Logan Schultz, right, during a Nov. 10 workout session at Warren County High School. Merchant is excited for his senior wrestling season, which is scheduled to start on Dec. 29. 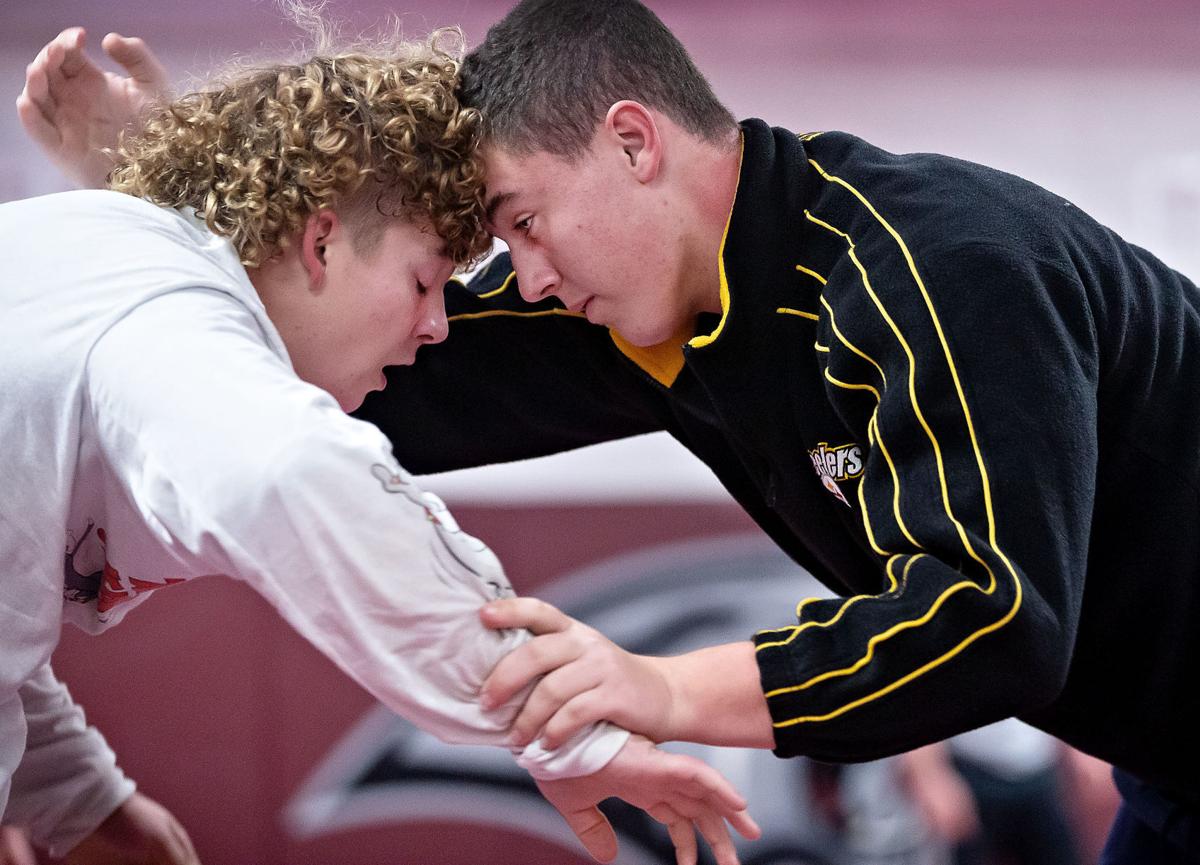 Wes Merchant, right, shown with Logan Schultz, said this year’s squad can have a good season.

Warren County’s Wes Merchant, left, spars with Logan Schultz, right, during a Nov. 10 workout session at Warren County High School. Merchant is excited for his senior wrestling season, which is scheduled to start on Dec. 29.

Wes Merchant, right, shown with Logan Schultz, said this year’s squad can have a good season.

The Warren County senior wrestler knows this season could be his last opportunity to do the sport he loves the most and he wants to make the most of it.

Merchant, a three-sport athlete, said there is nothing like being part of a wrestling team.

“I just love being on the wrestling team in general,” Merchant said. “The bond we have, us 14 guys are closer than anything I’ve ever been a part of. And we just have a bond that I don’t think anything can break, and each year the bond gets tighter. And as we go on we just get better as a team overall.”

Merchant said he wrestled when he was younger but then didn’t go out for the team as a freshman. He said he doesn’t remember why, but he now wishes he would have.

He came back to wrestling as a sophomore and had a lot of success in the postseason.

Merchant went 19-19 with 16 pins and advanced to the state tournament at the 220-pound weight class. He didn’t place at states, but he said he was happy he made it that far.

“Just the experience of being there and seeing what everything was like and watching the older guys progress through the tournament was just really something I enjoyed,” Merchant said. “It was really just a great experience overall.”

Merchant said he learned a lot of things from the state tournament that he can use in his upcoming senior year.

“I learned that the postseason was a way different animal than anything during the season,” he said. “All 16 of the kids are all good. There’s not going to be any matches that you just win in the first period, quick matches anything like that. The kids there are a different breed. Just the stadium itself and the arena, that many people around you is something that I’m not used to and most kids aren’t. A thousand people there – it’s just massive.”

Last year, the postseason did not go as well as Merchant would have liked. He finished the season 25-20 with 17 pins and didn’t qualify for the state tournament.

Merchant said he felt sluggish during the regional tournament and later found out he was sick.

“I look back at that tournament a lot and wonder what happened,” Merchant said. “I ended up going home and I had the flu. I’m not going to blame anything on that, but I didn’t wrestle well. But that’s kind of why I wasn’t me.”

Warren County wrestling coach Matt Wadas said that he saw improvements from Merchant even though the season didn’t end the way he wanted it to.

“I know he was disappointed, but I wasn’t because I saw a real maturing process,” Wadas said. “He was wrestling better and it was hard to see that for him because he didn’t make it and all he could see is results. But I saw progress, and I’m seeing more progress.”

Wadas said he thinks the fact that Merchant also plays baseball and football helps him in wrestling.

“This kid is a smart kid,” Wadas said. “He’s a governor’s school kid. He’s played lots of sports, even though wrestling is maybe not what he started with first. He’s played football a lot longer, played baseball a lot longer. He’s an athlete and he’s got that, we call it mat savvy. He’s got that awareness because he’s played different sports for so long.”

Being a senior, Merchant said that he along with classmates Brennan Komelasky and Cody Crawford are trying to be strong leaders this season.

“We just got to keep the other guys motivated,” Merchant said. “Try to bring in new people, bring in the guys who were there last year, that haven’t shown up yet (for workouts). Just leading the practices keeping everything going.”

Due to the COVID-19 pandemic, the Virginia High School League has shortened all of the seasons. Warren County’s first wrestling match is scheduled for Dec. 29 in a quad against King William, Patrick Henry (Ashland) and host Caroline.

Merchant said that he feels like this year’s squad can have a good season. He said his personal goal is to get back to states and win it. Merchant said he knows it’s important to make the most out of his senior year.

“I’ve been practicing throughout all of this trying to get better,” Merchant said. “I know this is my last run and I need to make the most of it. I know it’s now all or nothing at this point, especially with a limited season and with only two people going to states (from each weight class in each region). I just have to go all out at this point.”