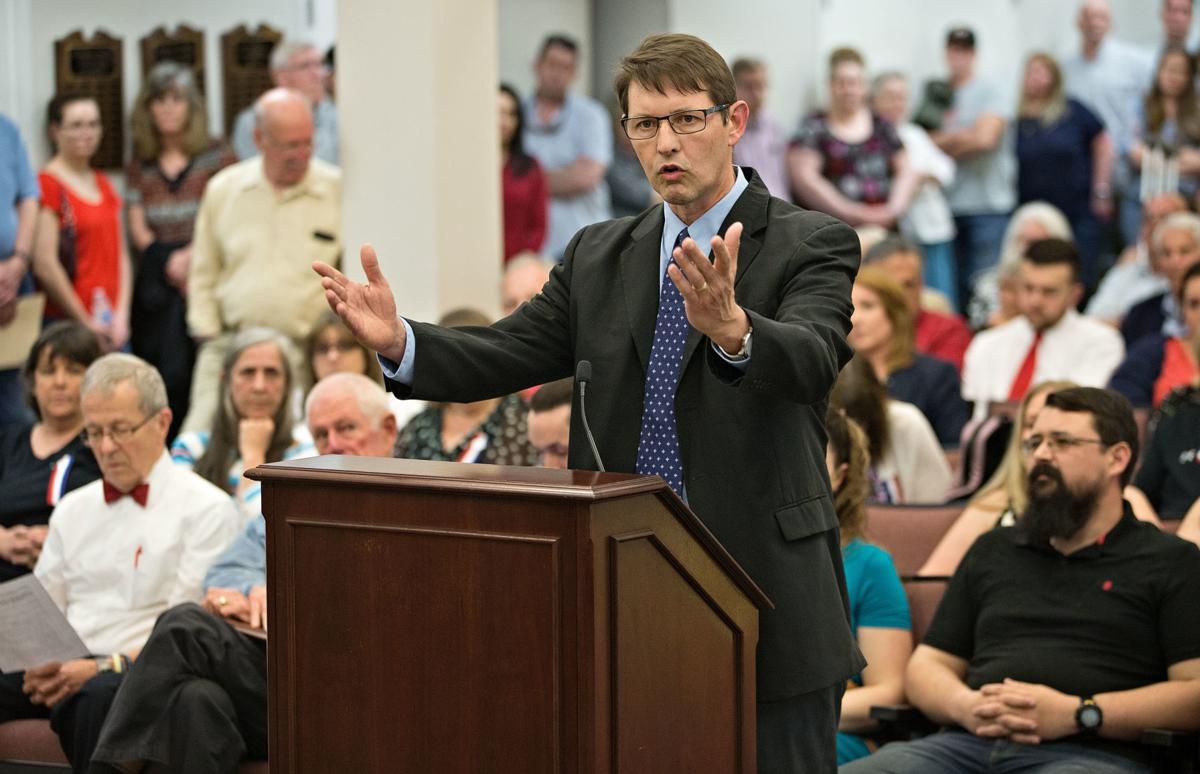 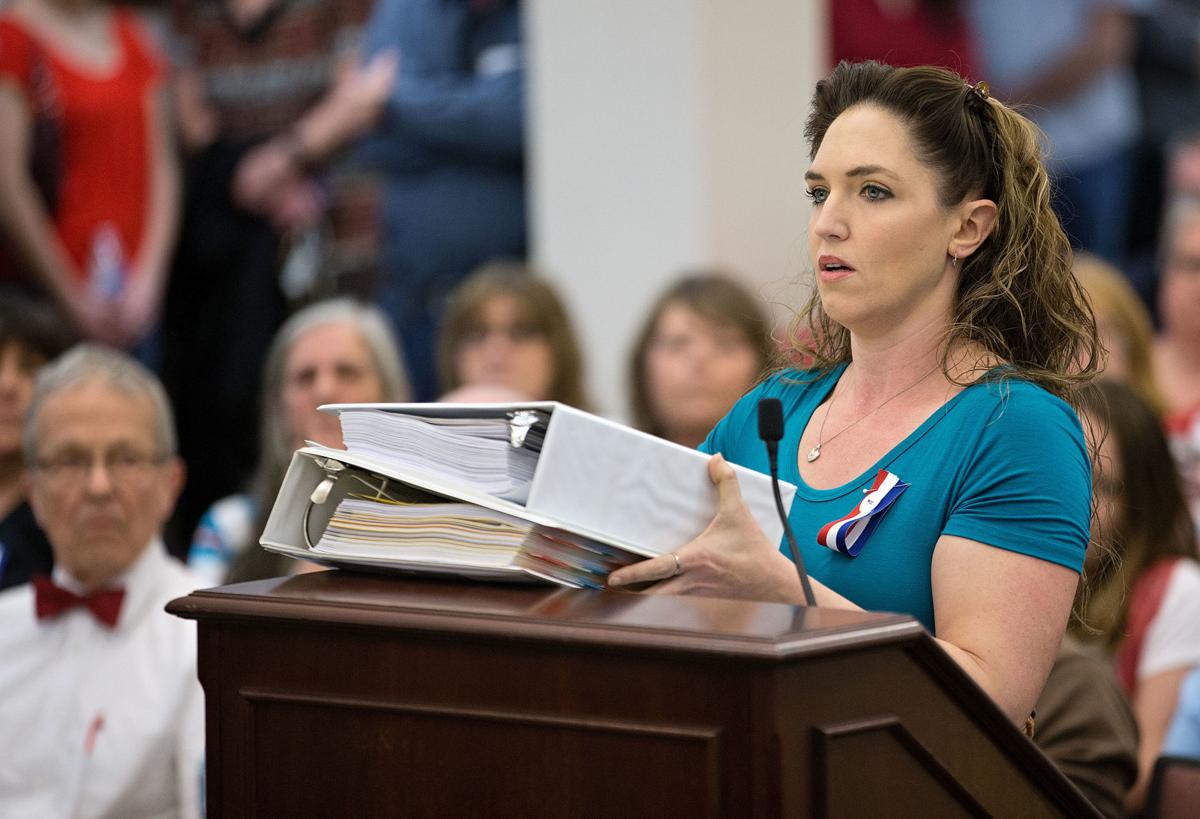 Melanie Salins, of Front Royal, holds budget books as she speaks to supervisors during the Warren County budget hearing. Salins told supervisors to find waste in the budget and not to raise taxes. 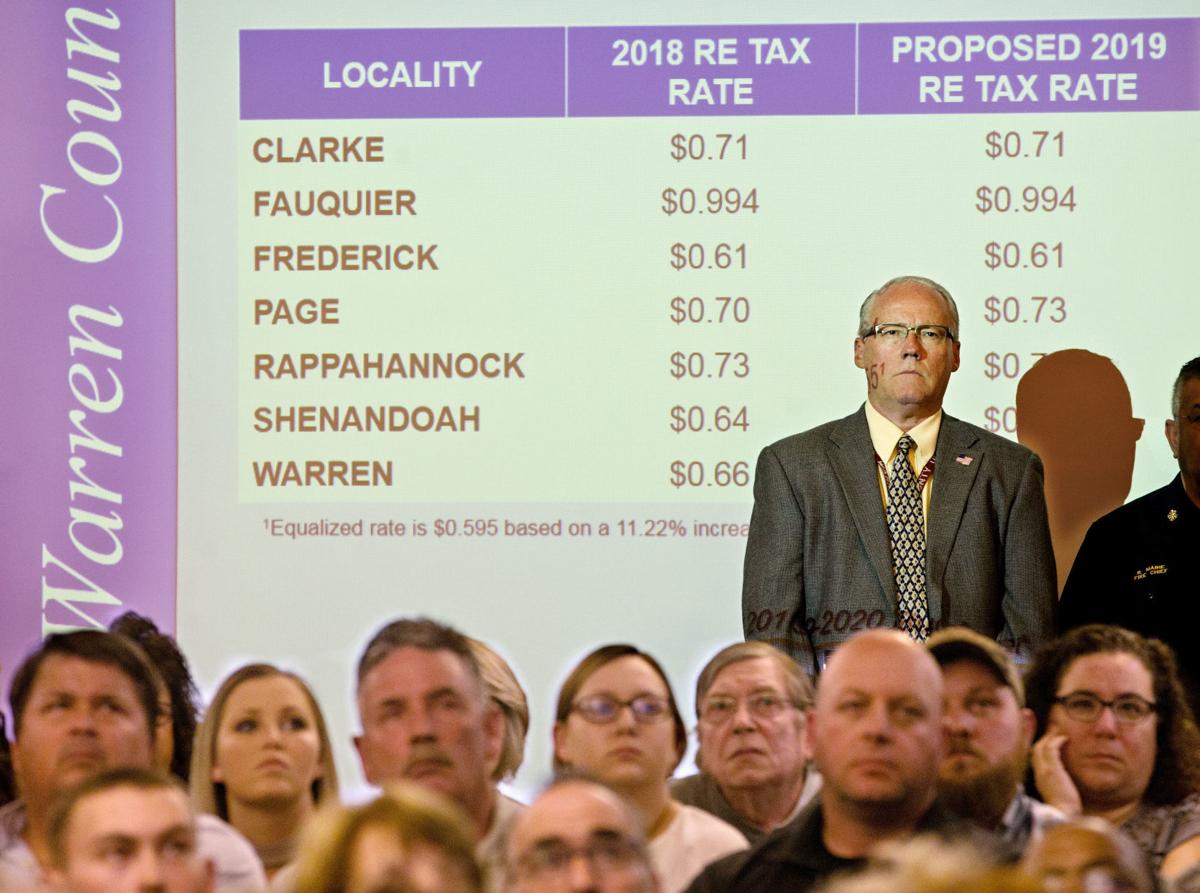 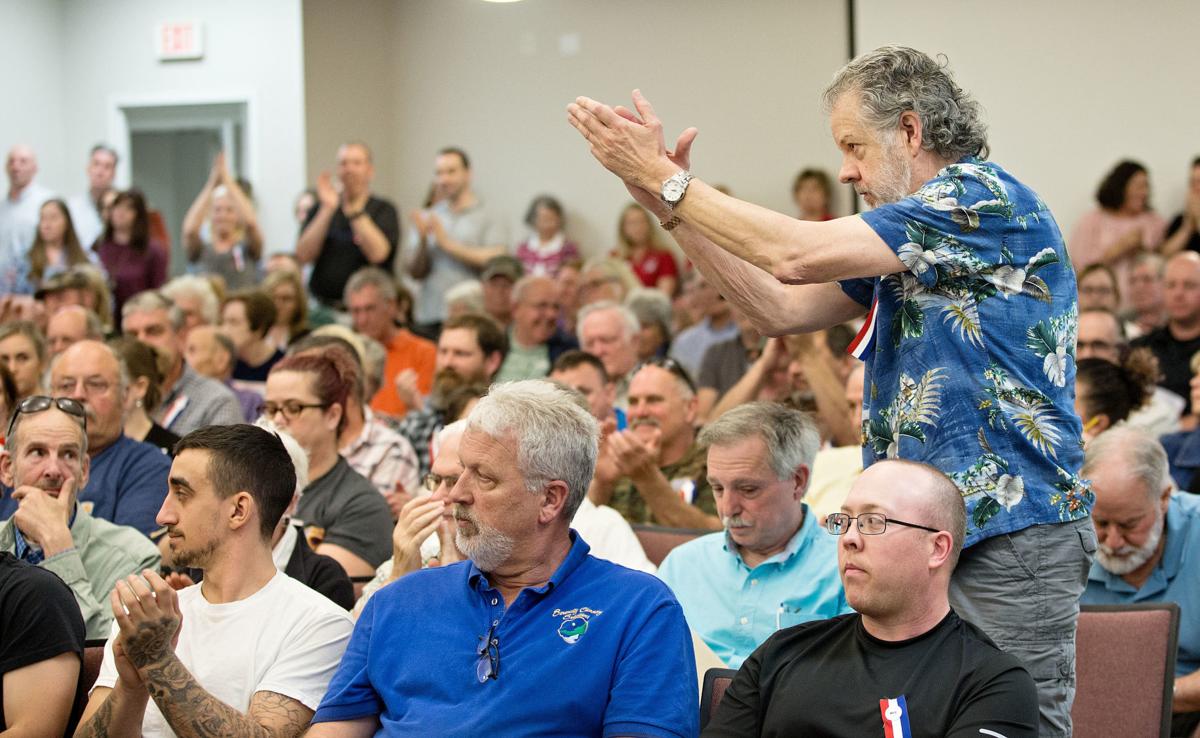 Paul Gabbert, of Front Royal, stands and applauds Melanie Salinas after she spoke in the packed room during the budget hearing. 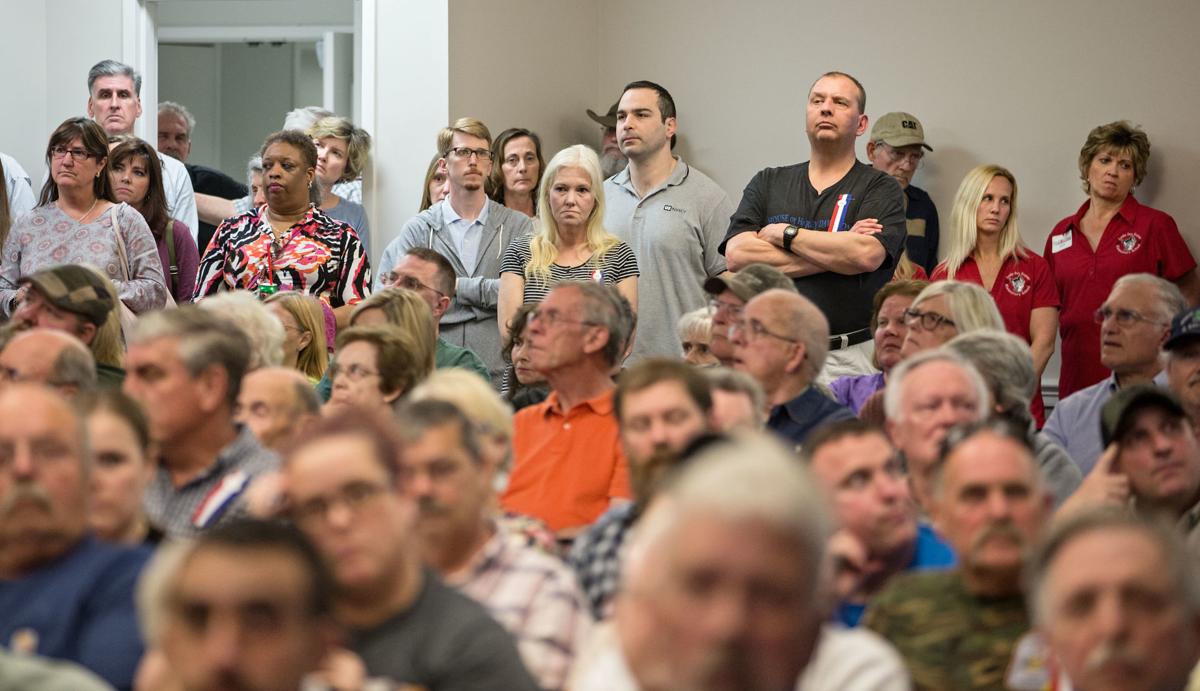 Melanie Salins, of Front Royal, holds budget books as she speaks to supervisors during the Warren County budget hearing. Salins told supervisors to find waste in the budget and not to raise taxes.

Paul Gabbert, of Front Royal, stands and applauds Melanie Salinas after she spoke in the packed room during the budget hearing.

FRONT ROYAL - There were not enough seats in the Board of Supervisors’ board room to accommodate the 200-plus citizens who showed up for the county’s public hearing on the proposed budget Tuesday night.

In a meeting that lasted 3 1/2 hours, over 50 speakers shared a distaste for a potential tax increase, called for resignations, berated what they called the supervisors’ lack of oversight of the Front Royal-Warren County Economic Development Authority and advocated for higher salaries for teachers.

Melanie Salins said the situation at the EDA - which includes the alleged embezzlement of over $17 million - has resulted in citizens no longer trusting officials.

Salins said the supervisors - who appoint EDA board members and provide a portion of the authority's operating budget - “were either involved, knew about, or suspected corruption and chose to turn a blind eye.”

“Or you failed to question or failed to tune in to your job responsibilities...Whatever the case may be, shame on you and shame on all of the citizens for not watching closely,” she said.

Chris Manion said the supervisors have “lost credibility” and have “no moral authority.”

“You’ve all presided over one boondoggle after another...you haven’t quit yet?” he asked.

He said the supervisors are “being supervised” by the people they have hired and appointed. He said “they are supervising you” and they “have gotten you into trouble.”

“Everybody on the board is shocked...desperate to know who caused this scandal. I brought along the answer,” he said and proceeded to hold a mirror in front of the supervisors.

As the limit on his time to speak wound down, Manion said “my time is up” and he told the supervisors that “maybe yours is too.”

Leslie Matthews noted that Supervisor Tony Carter told citizens last April that they should get involved in the budget process year-round and she took him up on this offer. But, she said, no supervisors, responded when she emailed them regarding a slew of concerns.

Harold Baggarly said he is disappointed that the supervisors “play Santa Claus” for county departments while taxpayers pay the bill.

“Y'all better wake up and get into these damn budgets and straighten them up. Cut them to the bone...get in line or go out the door,” he said.

Tyler Wright told the supervisors that it is an “honor and a privilege” for them to serve and they were voted in by citizens. He said the board needs to listen to angry citizens because “it’s just as easy for us to take you out of there.”

William Huck said Warren County is “on the Titanic” and officials need to “save everybody on the boat” and ask whether they are part of the solution or part of the problem.

Jeanian Clark said teachers are not being provided competitive salaries and she is concerned about potential long-term issues. She said teachers need to be paid better to avoid a “potential systemic failure.”

Alan Fox, Warren County Public Schools director of secondary education, said the county cannot afford to keep losing so many teachers to other localities every year. He said it breaks his heart to see young teachers trained locally and leave when they can become productive and make a difference in students’ lives.

Fred Andreae said he supports the tax increase because while the county has wonderful new schools, the teachers inside of them are fleeing for higher salaries.

Kristie Atwood noted that teachers do not make one-third of school Superintendent Greg Drescher’s salary and that turnover usually results from poor management.

She added that the Code of Virginia allows elected officials' removal from office, and and citizens should start a petition to get "y'all’s asses out of there.”

Dennis Willingham said that while he agrees that teachers should be given raises, administration salaries could be cut. He said that he does not want to be “too barbaric or primitive” but the supervisors should be tarred and feathered if taxes are increased.

“How much more can you take from us...am I going to have to go on food stamps or welfare?” he asked.

CORRECTION: A previous version of this article should have stated that the meeting was held Tuesday.