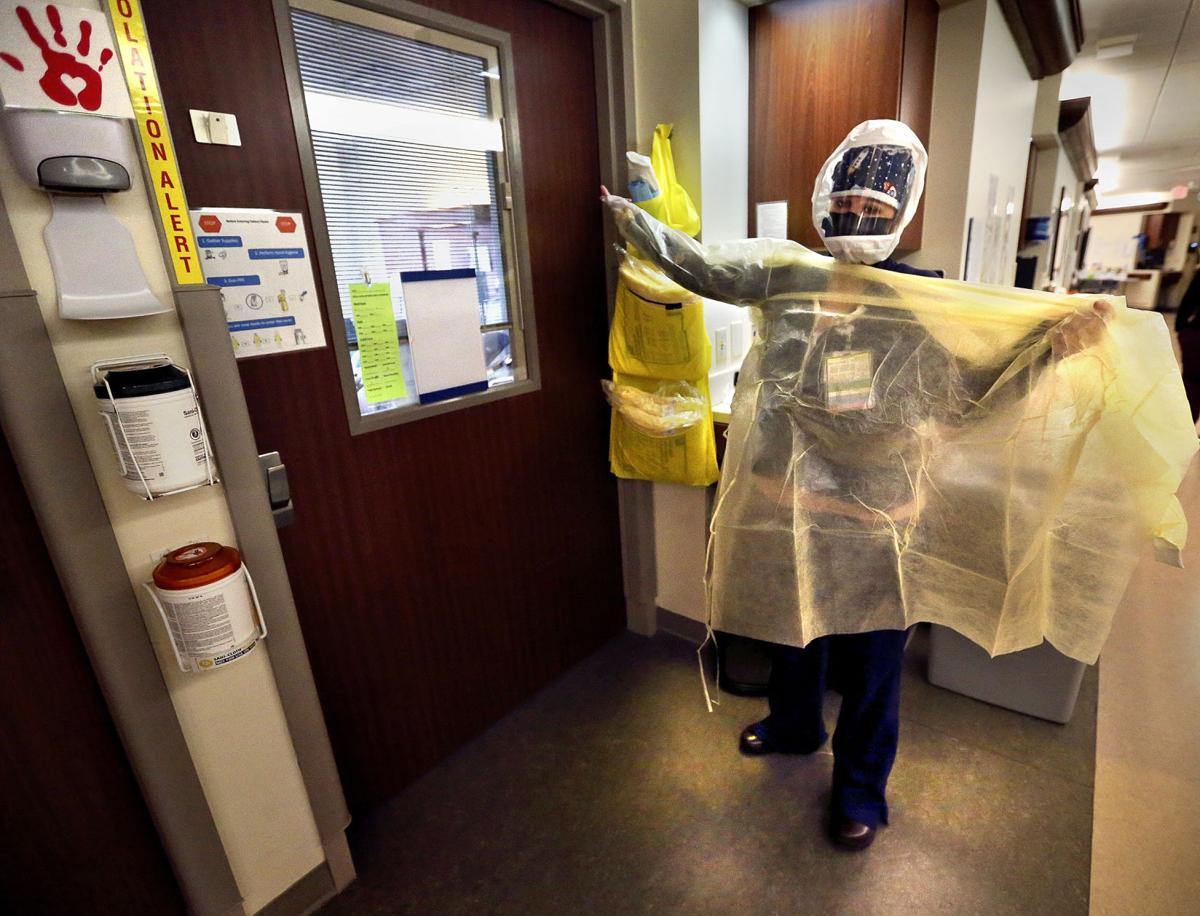 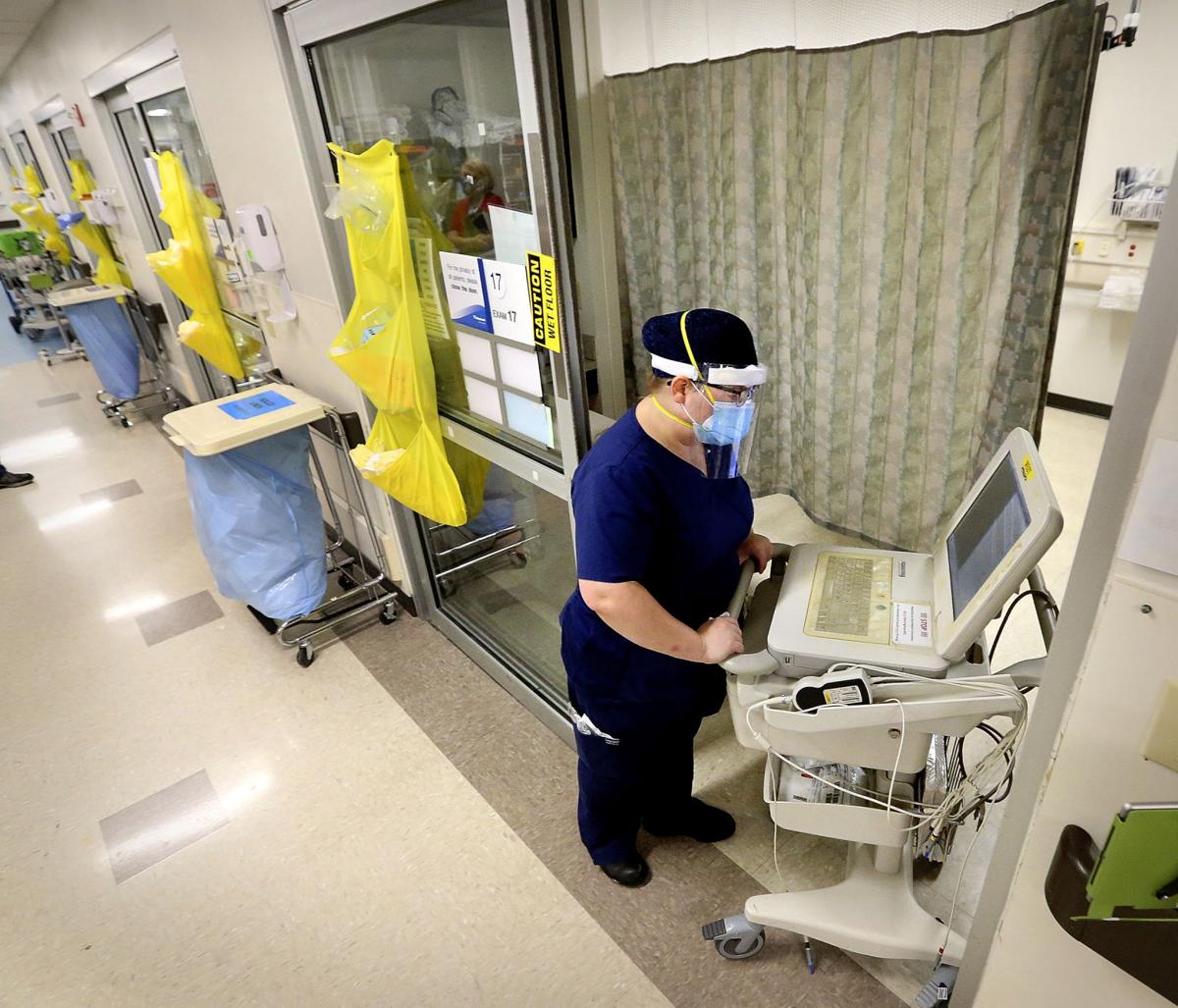 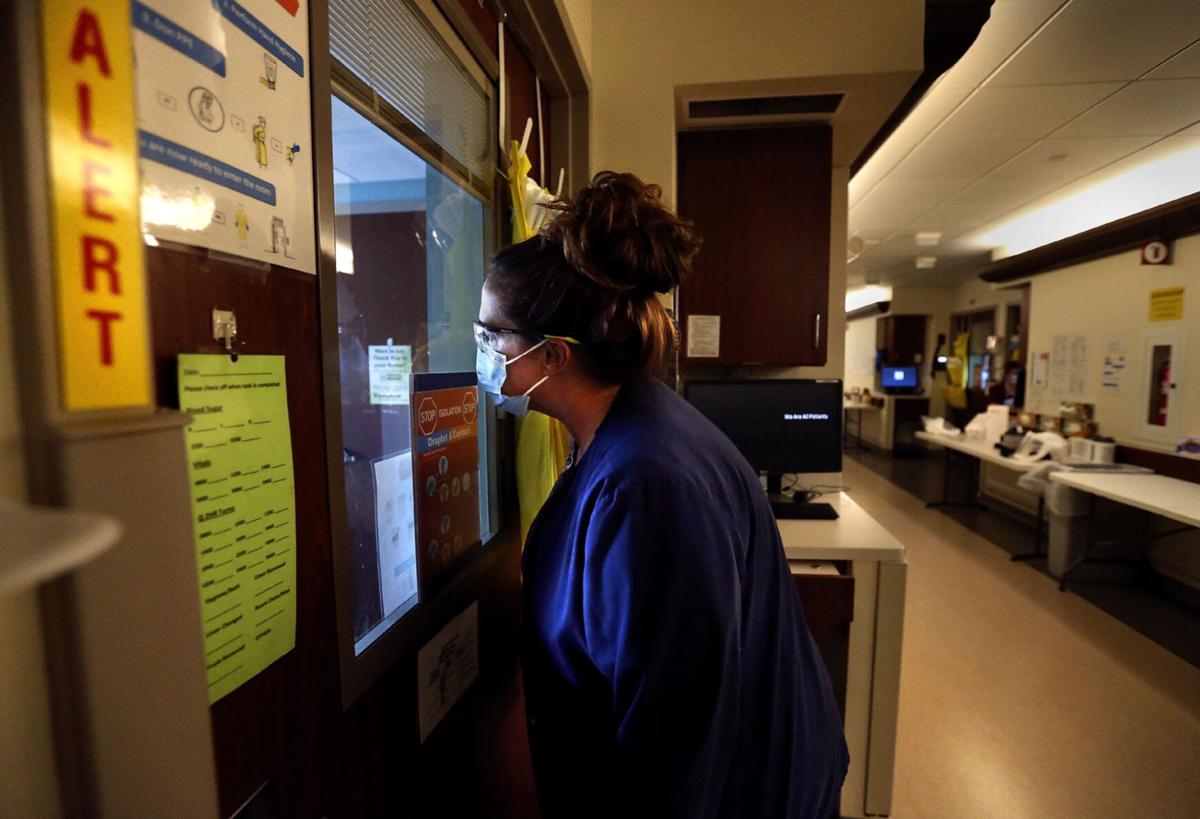 Christina Paxton of Winchester, a clinical manager at Winchester Medical Center, looks in on a COVID-19 patient Thursday. 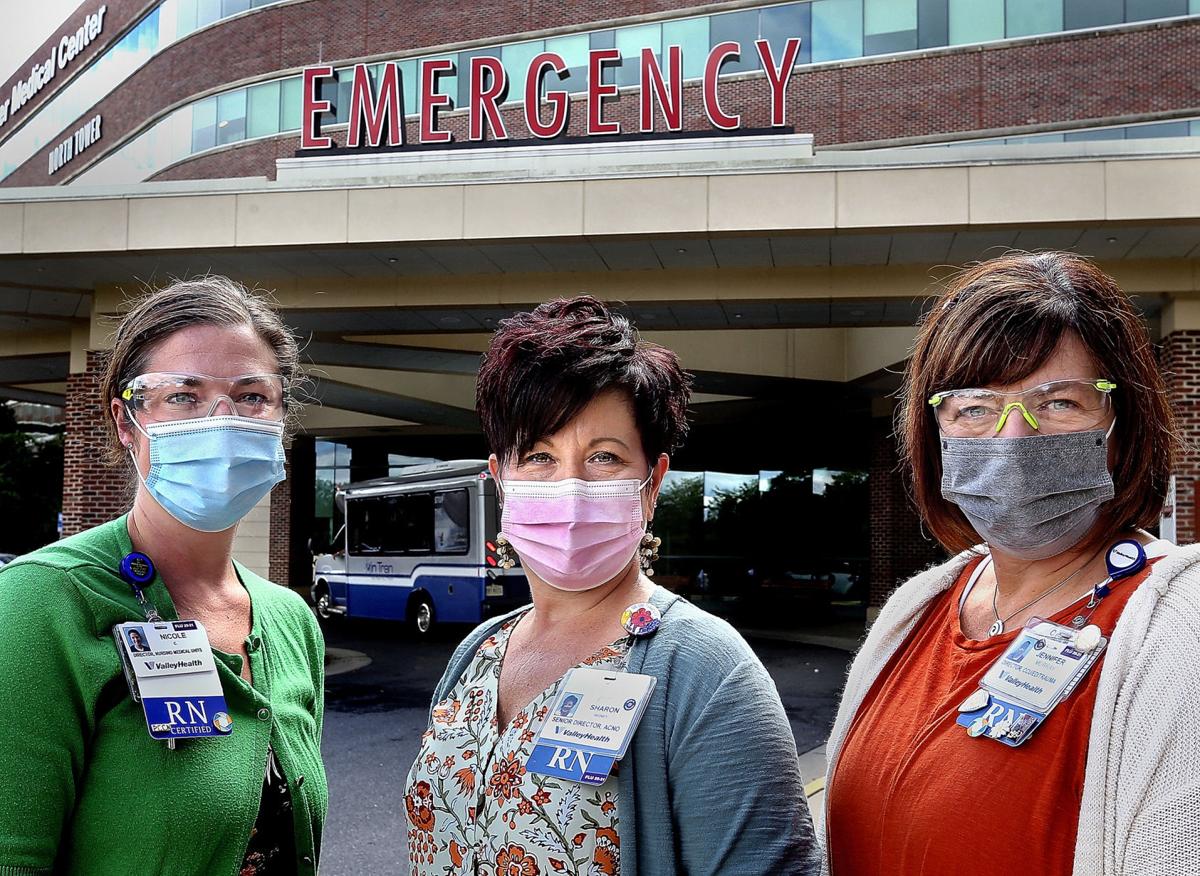 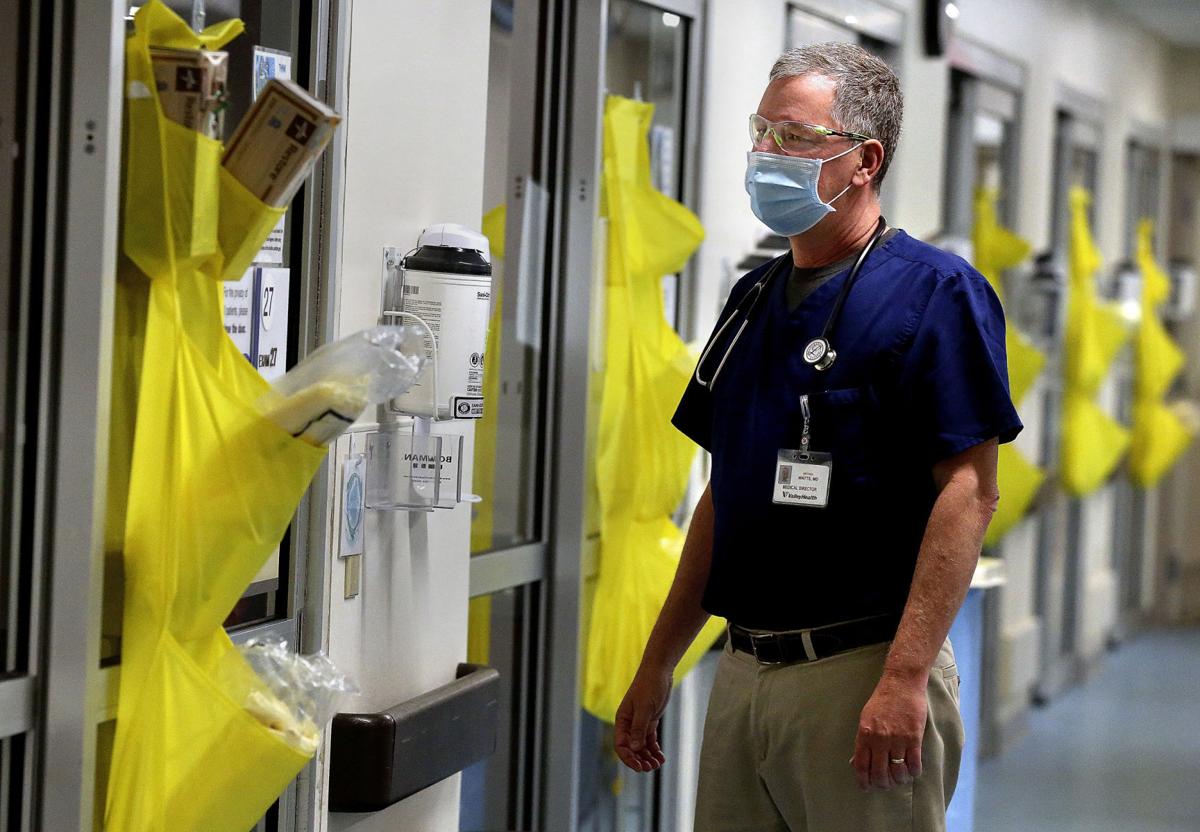 Dr. Michael Watts is medical director of the Emergency Department at Winchester Medical Center. He is shown Thursday with rooms containing COVID-19 patients. 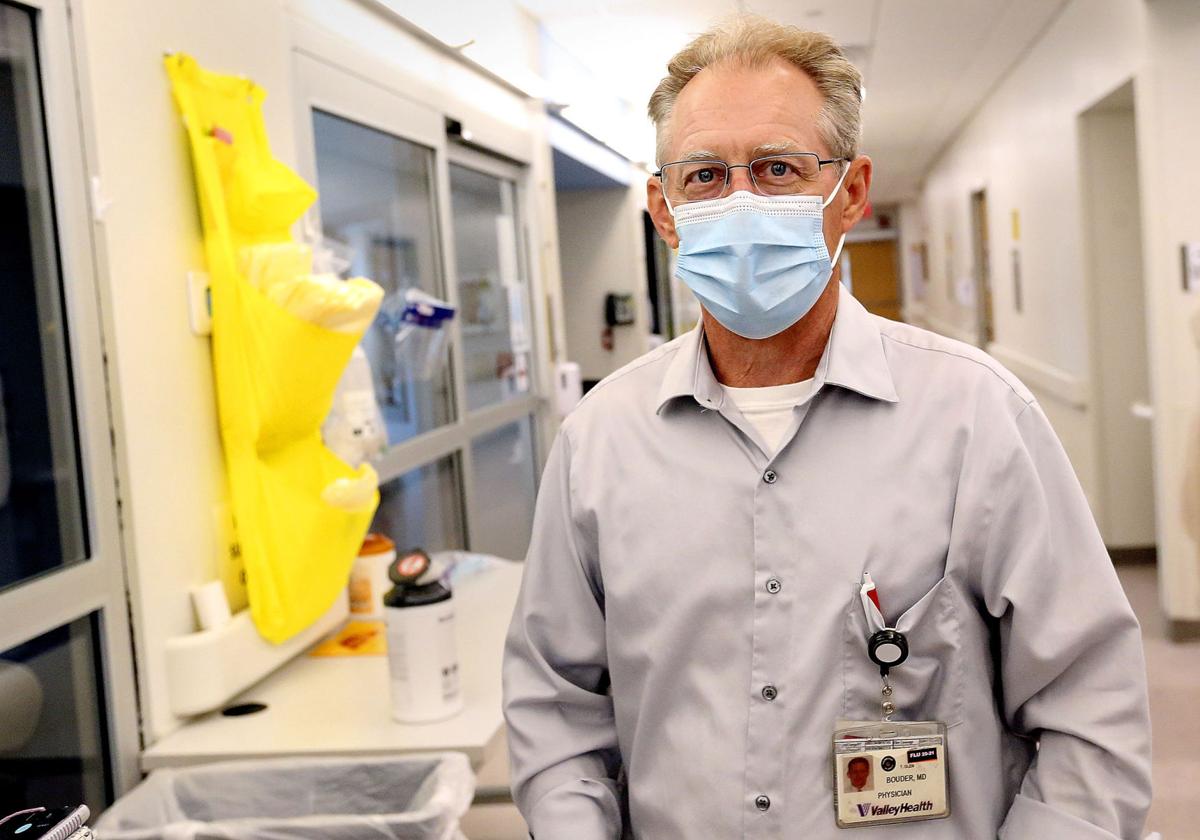 Dr. Glen Bouder is the medical director for the Critical Care Unit at Winchester Medical Center.

Christina Paxton of Winchester, a clinical manager at Winchester Medical Center, looks in on a COVID-19 patient Thursday.

Dr. Michael Watts is medical director of the Emergency Department at Winchester Medical Center. He is shown Thursday with rooms containing COVID-19 patients.

Dr. Glen Bouder is the medical director for the Critical Care Unit at Winchester Medical Center.

Local health professionals are pleading with the community to do whatever they can to stay healthy this fall and winter as COVID-19 cases continue to overwhelm local hospitals and other medical facilities.

With the more contagious delta variant prompting hospitalizations for all ages day after day, Valley Health staff are challenged to find beds for everyone in the Emergency Department and the Intensive Care Unit.

“The hospitals throughout the nation are full,” said Dr. Michael Watts, medical director of the Emergency Department at Winchester Medical Center.

That’s a trend that has been reflected in our region, where Dr. Nicolas Restrepo, vice president of medical affairs for Valley Health, said emergency rooms and intensive care units from Baltimore to Charlottesville are full and taking 24 hours or longer to approve transfers.

“It’s really a community problem, not just a hospital problem at this point,” Watts said.

“I think the studies have shown that getting vaccinated definitely helps with COVID, and that’s part of our resource problem, but we’re seeing a lot of sick patients period,” he said. “It’s not just COVID.”

Though Valley Health went through something similar late last fall when the COVID-19 pandemic reached its first big peak, it’s worse on hospitals now because staff are also dealing with patients who require hospitalization for other reasons.

“[It’s] just the general medical problems that we have all the time. It just seems to be a lot more people that are sicker than they have been in the past,” Watts said.

“I think part of it, they’ve been staying away from any health-care facility for longer than they should have,” he said. “I think it’s also a bit harder to get into wherever you need to access your health care.”

In addition to illnesses and chronic health problems, Restrepo has been noticing an uptick in injuries from car crashes and other accidents that weren’t happening as much last fall while people were quarantining.

People are still suffering strokes and cardiac arrest as well as broken bones, he said, and “the ICU staff is caring for the patients.”

The addition of so many COVID patients puts a strain on the hospital staffing levels while also filling any available critical care beds.

As of Monday, Valley Health was reporting 126 hospitalizations across its six regional hospitals, with 100 at Winchester Medical Center and 15 COVID patients requiring ventilators.

These numbers are down from a Wednesday report of 143 system-wide hospitalizations, 107 at WMC and 19 on ventilators.

But those numbers change every day, Restrepo said.

One unfortunate reason for beds becoming available is because people have died, he said.

The average ventilator stay is nine days, he said, and patients in their 30s have died from the virus.

“What frightens me the most is it’s September,” Willard said.

Usually, she said, most serious respiratory illnesses don’t occur until December or January.

Although it’s still a little early for flu season, medical staff are wary of the impact that will have.

“Our ability to function right now is better as a result of our history with [COVID-19],” Restrepo said.

But last year’s COVID experience only goes so far, he said, because the delta variant combined with a reopened society changes things.

“In many aspects the community’s lack of recognition of this crisis is making it worse,” Restrepo said.

“[There are] a lot of people who are behaving in ways that place people at risk,” he said. “Previously, the community had tremendous awareness and social responses that really helped us move forward in a productive way.”

Mitigation measures, such as wearing masks in public settings, maintaining distance from others, practicing proper hand-washing habits, and getting the vaccine when eligible are all ways in which people of any age can best avoid getting sick, he said.

Even though the Pfizer vaccine has full approval from the Federal Drug Administration and the vaccines by the two other two manufacturers have emergency use approval, 85% of local hospitalized COVID patients fighting for their lives are unvaccinated.

“People are locked in on clinical decisions they’re making based on Facebook and basically un-peer-reviewed information,” he said. “They’re putting themselves and their loved ones in jeopardy.”

In normal times, the ICU can average about 42 patients any given day, especially during flu season.

At WMC, critical care beds and specifically beds for COVID patients were added on Sept. 17 and again on Sept. 19 before Valley Health announced on Wednesday that it was implementing crisis measures including increasing ICU capacity, curtailing visitation and postponing some elective and nonessential surgeries.

Valley Health has said patient visitation has been restricted in large part because of an increase in disruptive visitor behavior, including some visitors refusing to wear a mask.

“The care teams here, they are giving it their all,” Willard said. “And right now, even giving it their all, it’s not quite enough. And we need the public’s help. We need them to be vaccinated, so we’re not feeling as stretched and constrained with the care that we deliver.”

Editor's note: This story has been corrected to say that not all elective surgeries are canceled. Surgeries that don't require a hospital stay after the operation are still be done.