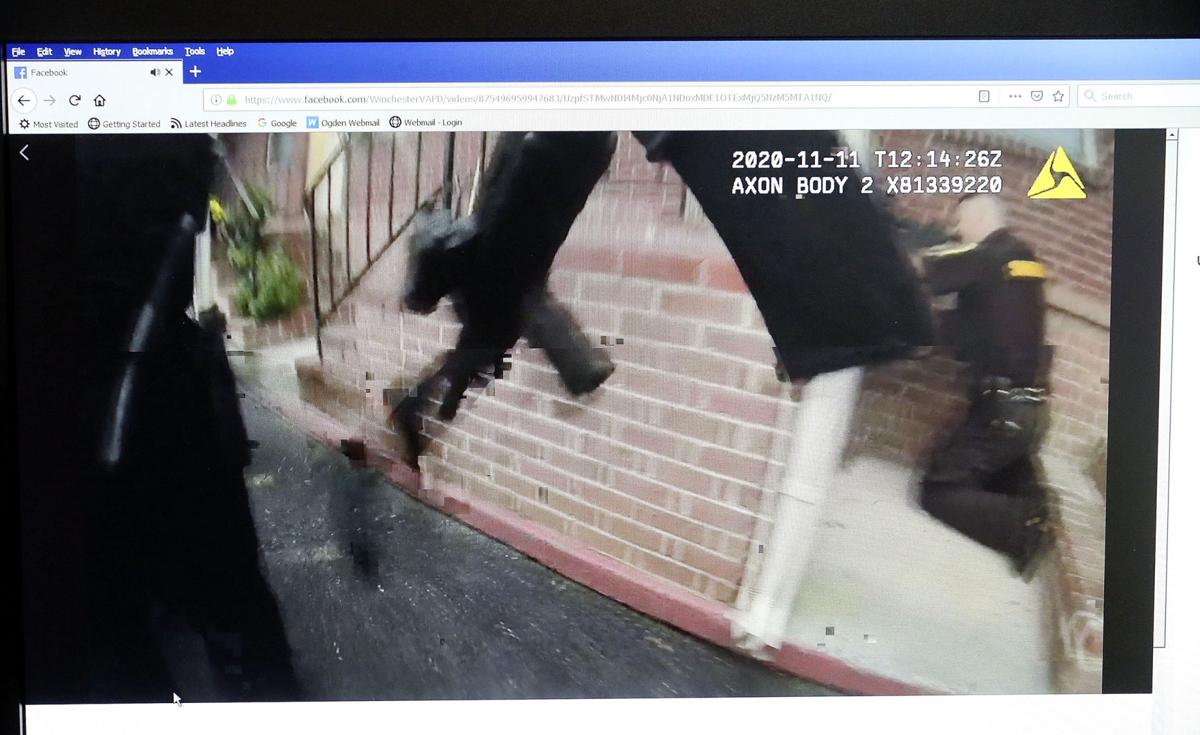 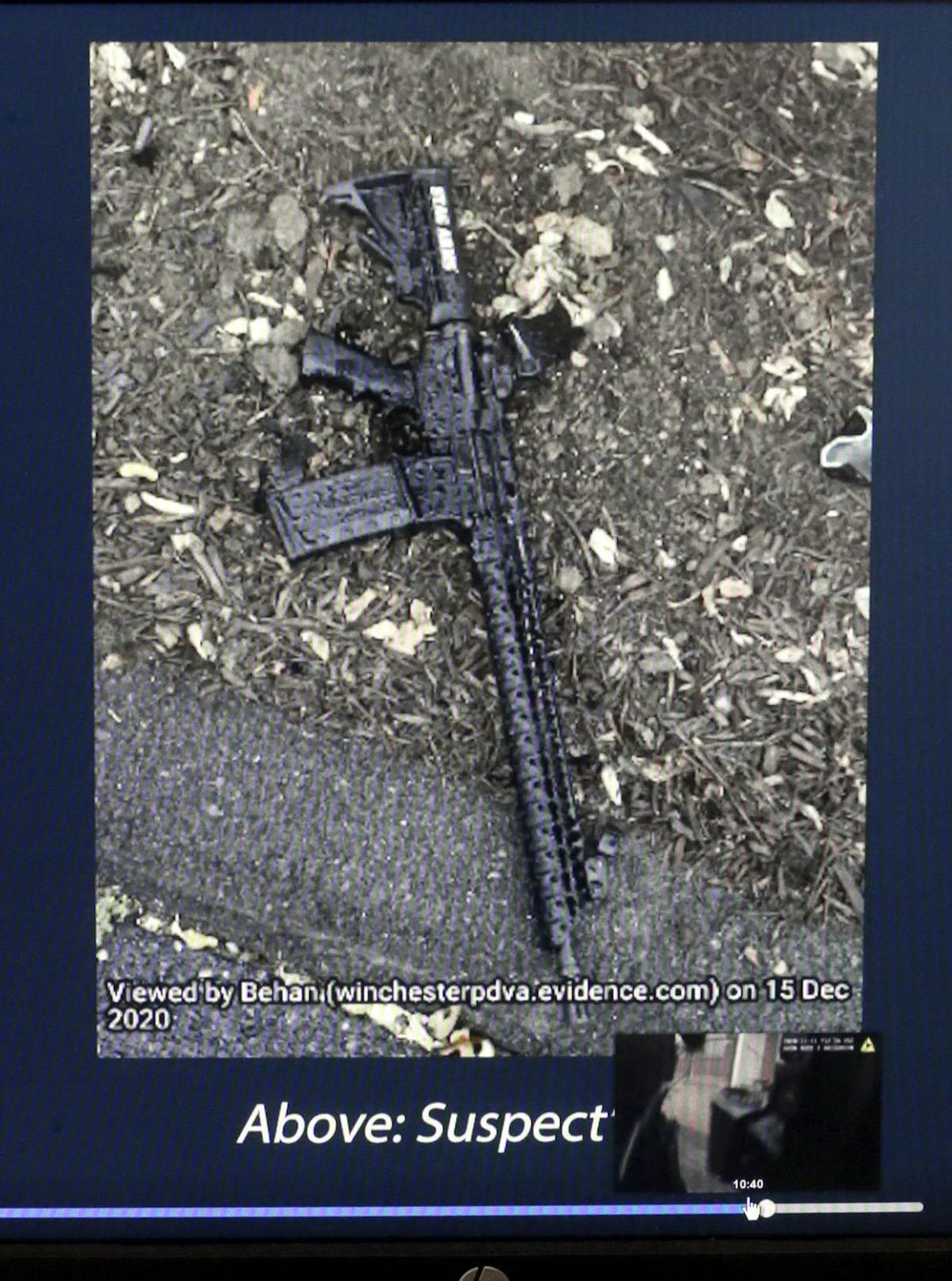 In the Winchester Police Department video released Thursday, the gunman’s rifle is shown on the ground. 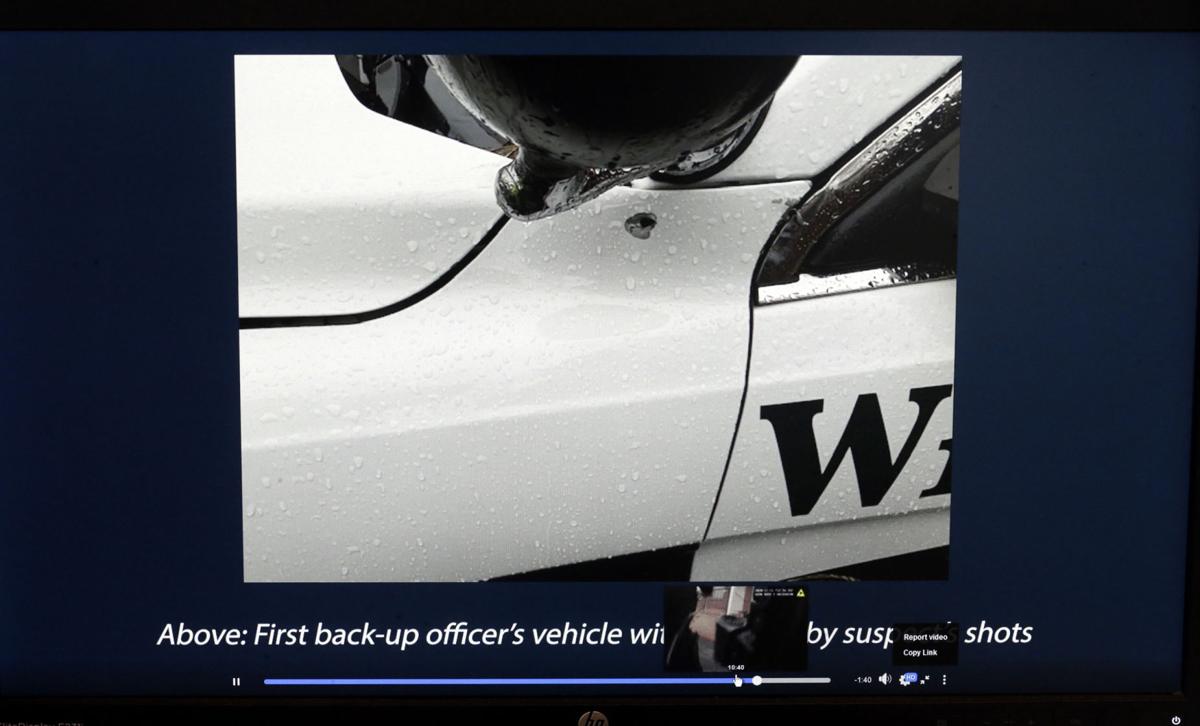 A bullet hole can be seen in a police cruiser at Hillcrest Apartments in Winchester on Nov. 11.

In the Winchester Police Department video released Thursday, the gunman’s rifle is shown on the ground.

A bullet hole can be seen in a police cruiser at Hillcrest Apartments in Winchester on Nov. 11.

WINCHESTER — Using a building for cover, Winchester Police Department Cpl. Sean C. O’Connor aimed his AR-15-style semi-automatic rifle at Eric Lyn Clark, who was on his porch about 50 yards away holding his own semi-automatic rifle that he had repeatedly fired at police.

“Eric, drop the rifle! Drop it now!,” O’Connor screamed before firing a shot at Clark and then, after Clark didn’t surrender, firing a second shot that killed him.

O’Connor’s attempt to get Clark to surrender during the Nov. 11 gunfight at Hillcrest Apartments at 2450 Massanutten Terrace are captured in body camera footage released by the Winchester Police Department on Thursday.

The footage is part of a department video detailing the incident for the public.

This is the first time Winchester police have released video of an officer-involved shooting. Police Chief John R. Piper, hired in 2017, said the release is part of ongoing departmental efforts to increase accountability, transparency and public trust.

Clark’s killing was ruled a justifiable homicide by Winchester Commonwealth’s Attorney Marc H. Abrams on Dec. 1. He said on Wednesday that he relied on the video, evidence at the scene and witness testimony that were part of a state police investigation of the incident.

The 52-year-old Clark, whose family said in his obituary that he had a long history of mental illness, had fired 10 shots from an AK-47-style semi-automatic rifle before being killed. Seven of the shots struck a police cruiser that had an officer trapped inside.

“He’s standing right behind me,” the officer radioed in. “I can’t get out of my car.”

Before firing, O’Connor circled behind an apartment building to get a better view of Clark. O’Connor was about 15 yards away from the cruiser, which was between Clark and O’Connor. He radioed a supervisor for approval before firing.

“OK, take the shot. Go ahead and take it,” the supervisor replied.

O’Connor ordered Clark, who police said was pointing his rifle in O’Connor’s direction, to surrender before firing the first shot. After firing the first shot, O’Connor screamed “move! move!” to the officer in the cruiser, who fled the vehicle for cover. As she ran, O’ Connor fired the second shot.

At 6:50 a.m., a neighbor of Clark’s called police about Clark smashing the window of the neighbor’s pickup truck with a sledgehammer. The neighbor said Clark had recently complained to him about smoking outside his apartment. “He’s been giving a lot of people trouble around here,” the neighbor told an emergency dispatcher.

A few minutes later, a rookie police officer accompanied by his field training officer arrived at the complex off Valley Avenue and exited their cruiser. The neighbor greeted them in the parking lot and then Clark came out of his apartment with the rifle.

The neighbor and officers ran for cover, with the officers hiding behind an SUV. They unsuccessfully tried to de-escalate the situation.

“Hey, man. We just want to talk!” one of the officers yelled at Clark. “Sir, will you talk to us? Explain to us what’s going on!”

“We’re not going to come near you. We just want to talk. Will you talk to us?”

A short time later, a female officer entered the parking lot with her lights and sirens activated. Clark fired a fusillade at her. “Goddamn, we got multiple shots fired,” one of the male officers said.

After the barrage, about 10 minutes elapsed with the officer trapped in her vehicle and Clark pointing his rifle in her direction.

“I’m sitting in my cruiser,” she radioed. “He’s standing right behind me on the porch.”

Once the officer was able to flee her vehicle and Clark was shot, officers attempted to render aid, but he was pronounced dead on the scene. A search warrant affidavit said clozapine, a sedative used to treat schizophrenia, was found inside Clark’s apartment.

Given the precarious situation with the officer trapped inside her cruiser, Piper said in the video that the killing was regrettable but necessary. He praised the performance of O’Connor — a Winchester officer since 2008 — and the other officers involved in the incident.

“I’m beyond proud of the bravery and action of all of our involved personnel,” Piper said. “Without swift and decisive action by our officers, this incident almost certainly would’ve ended with others being seriously wounded or killed.”

Piper noted the vast majority of officers never kill in the line of duty. There are approximately 750,000 police in the U.S. and about 1,000 officer-involved homicides annually. Nearly all are ruled justifiable.

Before Clark’s death, the last officer-involved homicide in Winchester was in 2002 when police said a man wanted on a probation violation pointed a pistol at police. The officers were cleared of any wrongdoing.

Citing privacy, Piper said in an interview that he wouldn’t name the other officers involved in the Nov. 11 incident or release the police internal affairs report on it. He said two of Clark’s relatives were shown the video about two weeks ago.

Winchester police purchased body cameras in 2018 with federal money. It was part of the Obama administration’s efforts to increase accountability in response to questionable police killings around the nation.

Body camera proponents said footage would protect police departments from frivolous lawsuits while holding officers accountable when they break the law or violate departmental procedures. Body camera video is considered public information in some states and police routinely release it after officer-involved shootings. However, Virginia Freedom of Information Act laws allow but don’t require police to release it, and they rarely do.

Piper said the department would consider releasing body camera footage in the future if it doesn’t compromise ongoing criminal investigations.

“The commitment to transparency is in line with what we’re trying to do to further engage with the community,” he said. “This is an important first step in trying to push out additional information, where appropriate, to the community.”

The video is available at https://www.youtube.com/watch?v=gDYlDKakU-c&feature=youtu.be