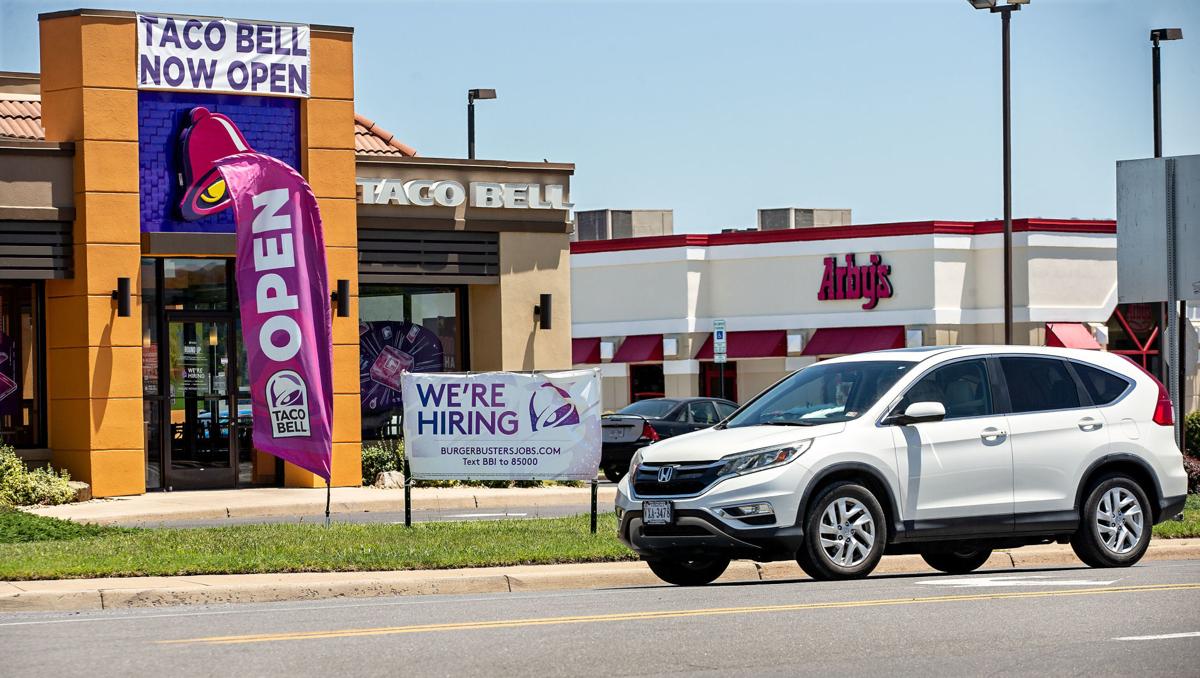 A sign soliciting workers stands in front of the Taco Bell on East Reservoir Road in Woodstock. 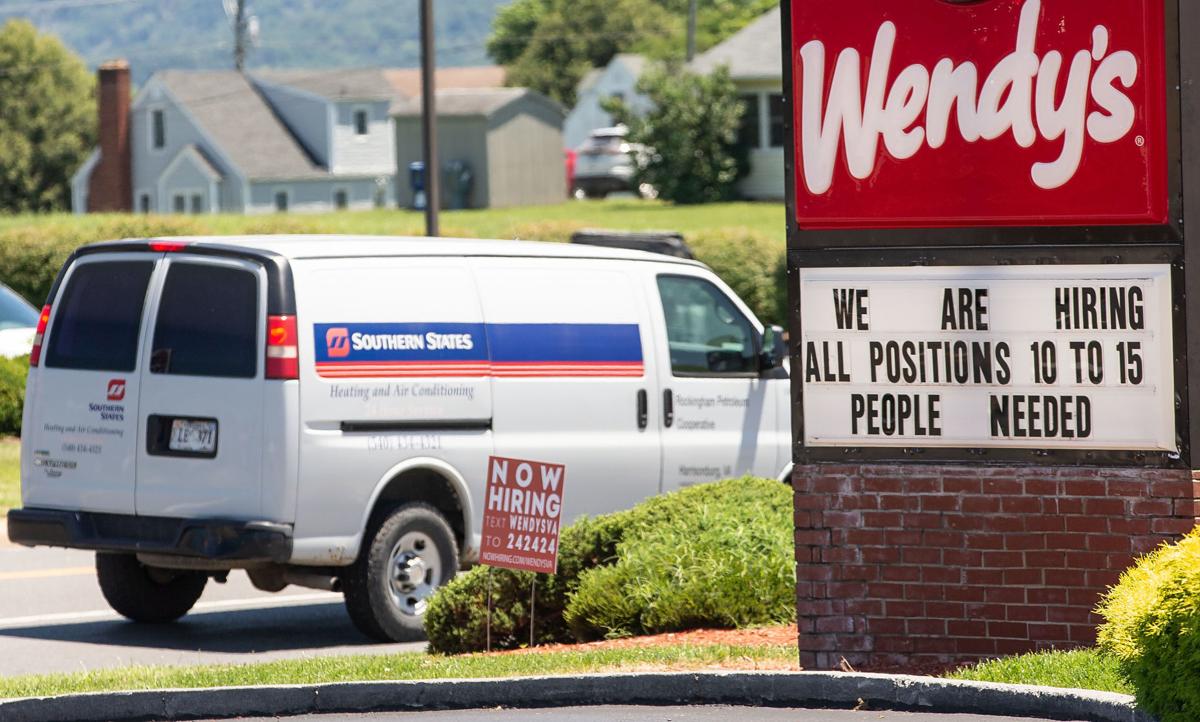 A sign soliciting workers stands in front of the Taco Bell on East Reservoir Road in Woodstock.

Even before the pandemic, help wanted signs along roadsides or taped to drive-thru windows were not uncommon sights throughout the Northern Shenandoah Valley.

But as COVID-19 restrictions began to lift this spring, these solicitations became bigger, bolder and often included offers for sign-on bonuses, special benefits or other incentives. Businesses took to Facebook to announce they needed workers or they'd be forced to cut hours, maybe even close altogether.

“The businesses that are ready to grow and expand, they aren’t able to do so,” said Sharon Baroncelli, president of the Shenandoah County Chamber of Commerce. “They’re being held back because they can’t find workers. That frustration is being felt across all industries.”

Much of the country is dealing with the same problem, according to a National Federation of Independent Business study in June that showed 46% of small business owners reported having job openings they could not fill. That’s down two percentage points from May but still above the 48-year historical average of 22%, the study reported.

Finding qualified workers remains a problem for small businesses as 89% of those hiring or trying to hire reported few or no “qualified” applicants for their open positions in June.

“Some employers are hiring workers, just working exceptionally harder to do so, and are having to get more creative like increasing pay, (offering a) sign-on bonus, lowering some requirements and widening their search radius,” said Patrick Barker, executive director of the Frederick County Economic Development Authority. “Like throughout the rest of the state and nation, fear of getting COVID, lack of child care and enhanced unemployment benefits are the most referenced reasons why many jobs go unfilled.”

Local officials have different viewpoints on what some have called a “labor shortage.” Still, they agree that finding enough workers is a constant struggle.

“Even before the COVID crisis, when the economy was booming, across the board all of the businesses and industries that I visited with said they were having a hard time recruiting qualified workers,” said Doug Parsons, executive director of the Front Royal-Warren County Economic Development Authority. “Business was booming and the demand for labor was increasing (before COVID). That drove up the wages, which is a good thing. But the availability of qualified workers went down.”

The lack of workers prior to COVID seemed to be more about the difficulty of finding ones with the right skills, officials said. That doesn’t seem to be entirely the case now.

“We are seeing the same labor shortage that we saw pre-COVID, but it does certainly have a different flavor to it,” said Shawn Hershberger, development services director for the City of Winchester. “It just seems like it’s more across the board in terms of difficulty in finding employees.”

The COVID-19 pandemic has changed the lives of many workers, maybe forever.

Many office workers were sent home to work remotely, and some may never return. Restaurants were forced to close indoor seating and many servers and other industry workers hit the unemployment line. Local attractions sat empty for weeks — sometimes months — while folks avoided traveling.

One of the biggest changes has been how unemployment benefits have been handled since March of 2020. Additional payouts to help ease the sting were approved by Congress and President Biden. Most recently, the $1.9 trillion American Rescue Plan, passed in March, renewed the federal boost to jobless benefits, giving recipients extra aid on top of state assistance until Sept. 6.

For the week ending June 26, 34 initial unemployment claims were filed in Frederick County, 25 in Warren County, 22 in both Shenandoah County and Winchester and four in Clarke County. Just over 40,200 continued claims were made in Virginia for the same period.

Since March 21, 2020, more than 1.7 million initial jobless claims have been made in the commonwealth.

Some workers may actually receive more money from unemployment benefits than their paycheck. Some still may be struggling to find child care. Others may see the payments as enough to get by on without risking their health by returning to work.

“Some are openly saying it: ‘I’m getting more by staying home.’ It’s just frustrating,” Baroncelli said. “Just think of the economical gains we could be making if everyone went back to work. It would help localities, help states, help the country get back to normal quicker.”

“The margin between a wage they can obtain in their industry sector and what certain folks are receiving in payments from the government is not enough to motivate people to take positions within those companies,” he said. “In my humble opinion, from what I’m hearing, that’s not a rumor. It’s the truth. I don’t know how widespread it is, and I couldn’t tell you the number of people who are receiving benefits who could be employed. But I know that this is a phenomenon that’s occurring out there.”

Virginia has been “ahead of the curve” in recent years in terms of workforce recruitment, training and retention, according to Parsons. Community colleges work to train skilled workers for labor-intensive jobs while small business development centers work to train and place workers as well. Parsons said “there’s a network in place” that works to ensure job seekers can find jobs.

But what if not every “job seeker” is actually looking for a job, some have wondered.

“I’m not sure that’s something we can control right now,” Meredith Norris, owner of Flour and Water Co. in Woodstock, said during a recent Shenandoah County Tourism Council meeting. “I think everyone’s having the same trouble with people expressing interest then no-showing to interviews, or starting to work and then no-show to work or just a host of things, more around the employability of people versus attracting people.”

Some of the job searching could simply be trying to fulfill the work search requirements for unemployment.

According to the Virginia Employment Commission, anyone who wants a weekly unemployment benefit claim is required to “make an active search for work.” Claimants must provide a report of those contacts. Additionally, claimants are “required to be able to work, available for work, actively seeking and unable to obtain suitable work and be willing to accept any offer of suitable work without attaching any undue restrictions not usual and customary for the type work they are seeking.”

Unemployment benefits aside, other factors are at play.

Some workers may feel that they won’t take a job that pays less than what they feel they deserve.

“We have to entice people with better pay instead of minimum wage. As a young sous chef, I think I made $28,000 a year and worked 60 hours a week. You don’t think about it, because that’s how things go,” said Jose Arevalos, chef and co-owner of Woodstock Cafe. “But thinking back now, how do you ask somebody to do that, to put that much time and effort into something and not compensate them?

“It’s tough out here in a small town, too,” he added. “In order to do that, we might have to raise some prices here and there, and people may not want to pay that, especially when you have a bunch of fast food places where you can run in and out and feed yourself for $5. How do you compete with that?”

A Pew Research Center survey this year found that 66% of unemployed workers surveyed had “seriously considered” changing their career or making their way out of “stepping-stone” jobs.

For fast-food restaurants, retail shops and other places that may be viewed as in-between jobs, that could very well mean fewer interested workers.

“How do we get people to come back to work in an industry that’s not necessarily meant as a career? There’s a stigma behind it, too, that it’s not a real job. Typically it’s low pay and crazy hours with little flexibility,” Arevalos said. “I think coming out of this, we’re going to see a shift in how restaurants run in order to survive. People just don’t want to work in this type of environment anymore. So, how do we cultivate an environment where people want to come out and work and have a career in this industry?”

Certainly some businesses, including some restaurants and retail shops, have reported near-record growth in recent months after COVID restrictions were lifted. But when there are no workers to sustain the growth, what does that mean for the region?

“It means we’re not in a good place,” one local official said.