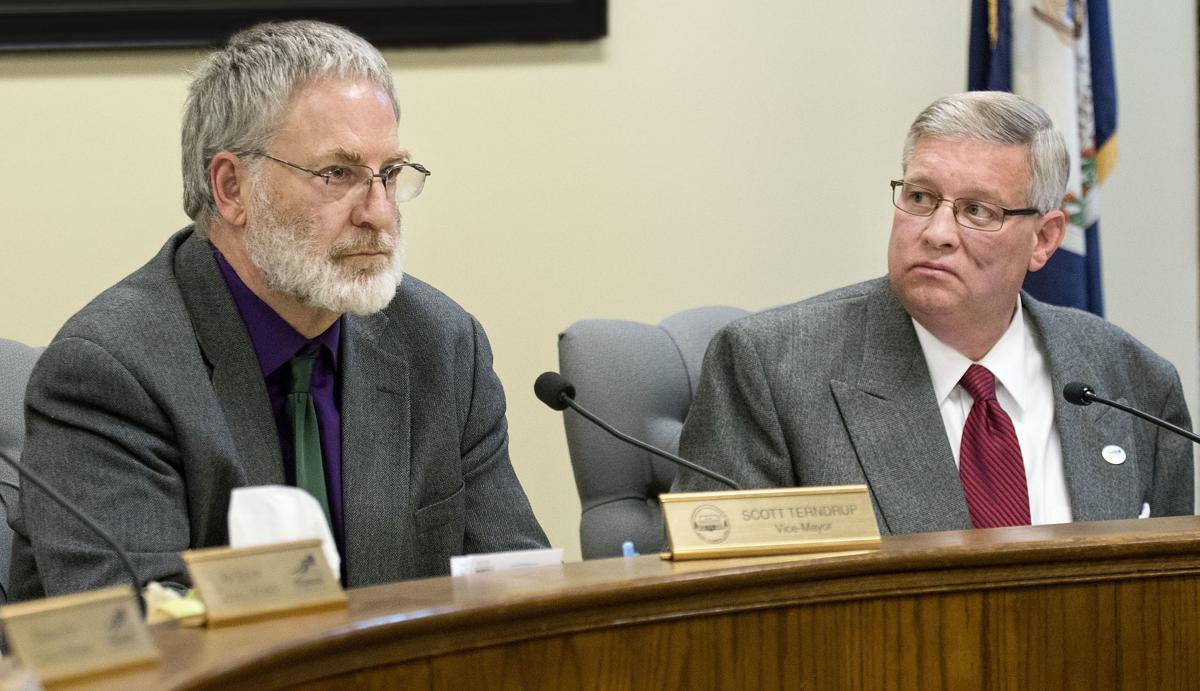 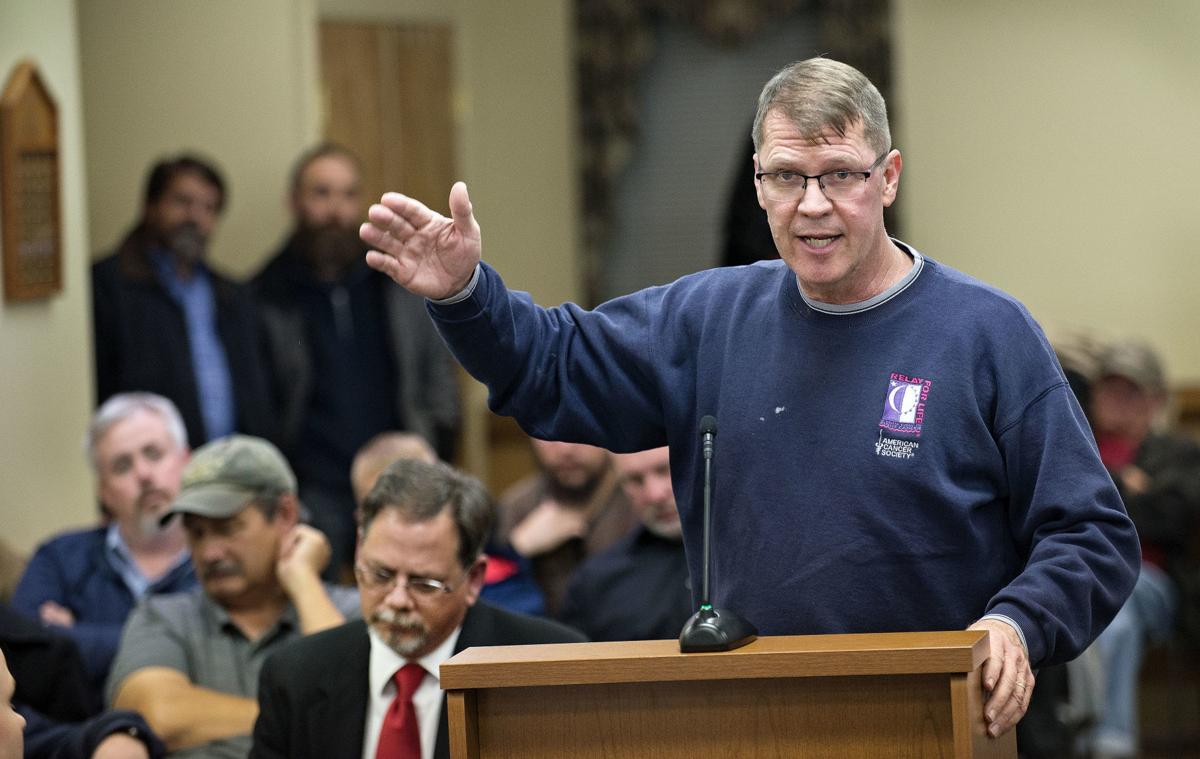 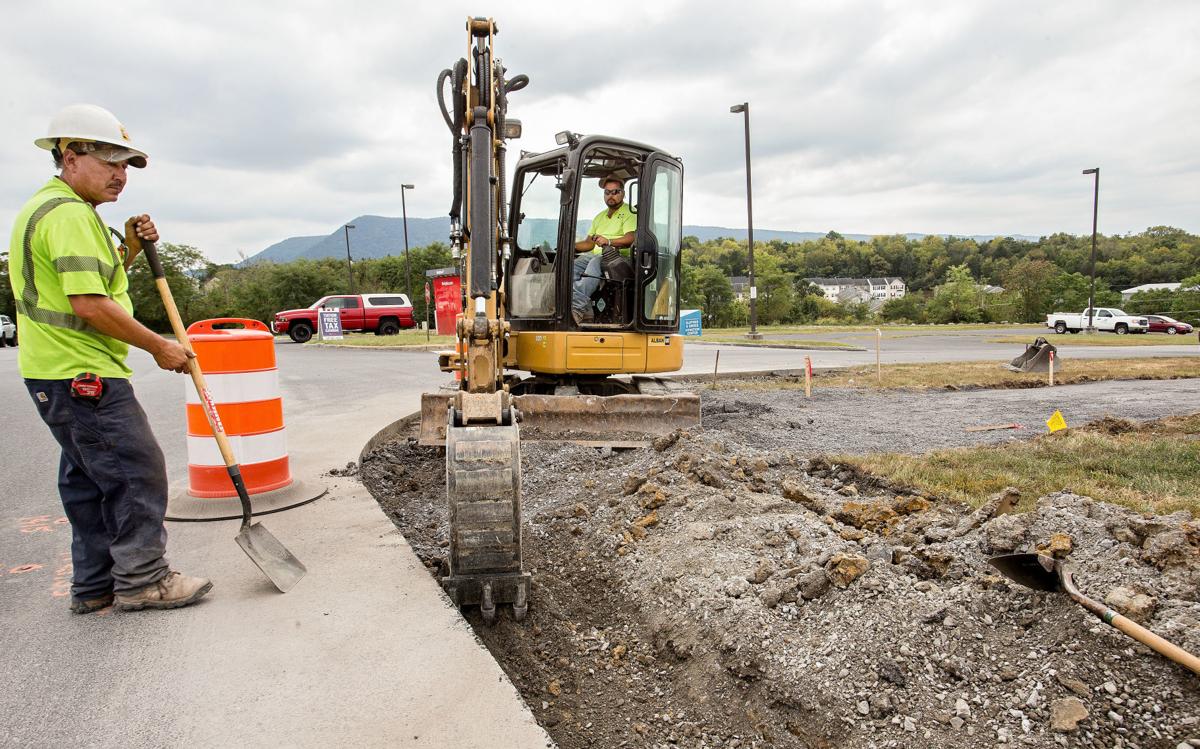 Preto Luna Feliciano, left, a construction laborer, and Rogelio Arellano, right, an equipment operator, both employed by G.B. Foltz Contracting Inc. of Mount Jackson, work on the curbing outside the intersection of Shopping Center Road and Old Valley Pike at Strasburg’s Gateway Trails Project in September.

Preto Luna Feliciano, left, a construction laborer, and Rogelio Arellano, right, an equipment operator, both employed by G.B. Foltz Contracting Inc. of Mount Jackson, work on the curbing outside the intersection of Shopping Center Road and Old Valley Pike at Strasburg’s Gateway Trails Project in September.

The mayor’s vehicle crash into the town library set the stage for a year of drama in Strasburg in 2019.

Other stories that played out in town included plans for a new housing development, talk of a water rate study and smart water meters, construction on two transportation projects, several legal battles embroiling the mayor and the Town Council, new event space downtown and a resolution for the town to support the Second Amendment.

On May 17, the first night of the town’s Mayfest celebration, Mayor Richard Orndorff Jr. crashed a John Deere Gator owned by Shenandoah County Public Schools into the Strasburg Community Library. He was flown to INOVA Fairfax Hospital where he remained for weeks, receiving medical care and undergoing surgery on his face, jaw, back, left eye and trachea.

During this time, the council and community received no word on his welfare or plans to return, except that he was recovering and that his family requested privacy. Orndorff said later that he had suffered a traumatic brain injury, “and for the better part of five weeks I didn’t know where I was.”

Some in the community supported Orndorff, while others criticized him and the Town Council.

“As a council member, I felt I got steamrolled,” Councilman Ken Cherrix said in August. People in the community were accusing the council and the police of a cover-up, he recalled, because there was no word of charges filed against Orndorff.

“We had absolutely no information whatsoever the whole time, no matter what people think. … “Because nothing was said for three months, we’re all thrown under the bus.”

When Orndorff returned home in July, Virginia State Police charged him with two misdemeanors — driving under the influence of alcohol and driving a recreational vehicle on a state highway.

Mark Johnston, the superintendent of Shenandoah County Public Schools, has said the Gator was not damaged enough to make it inoperable and that the school system did not need to file any insurance claims or pay for repairs.

However, following the crash, the school division determined not to loan out any more vehicles or equipment for community use. Johnston said the division had previously loaned out the vehicle for the town to use during Mayfest.

“It was a routine loan for that event,” he said in November. “After the accident, we shut that down as a division.”

In addition to the two misdemeanor charges, Orndorff in September was indicted on several counts of unauthorized use of "devices" that could include food stamps or electronic benefit transfer cards.

That month a group of residents filed a petition with the county Circuit Court requesting the mayor be removed from office. The petition case was halted on Nov. 1, but the town awaits word on if it will be responsible for paying the mayor’s legal fees in defending himself against the petition.

In early fall, the council voted to censure the mayor and later asked the mayor to resign. However, the council has no legal power to force the resignation of the mayor.

“It’s like having this little cloud over us,” he said. “[It] makes it more difficult for the town to conduct its business.”

Terndrup, who was acting mayor last summer, said it’s hard to talk about the mayor and not talk about his many legal battles — “especially when they’re kind of pulling council into it.”

Wishing Orndorff all the best in his continued recovery, Terndrup said it’s sometimes difficult for people to make a distinction between the person and the position of mayor.

“I hope Rich continues to heal and get better and feel like his own normal self again,” Terndrup said. “It’s too bad that some people attack him personally. I don’t think that’s helpful.”

Orndorff has not resigned but also has not announced his intention to run again in the spring 2020 mayoral election. Town residents Don Le Vine and Marlin Dixon have announced their campaigns for mayor.

At its June meeting, the Town Council deadlocked on a vote to approve a proffer amendment from developer Pennoni Associates to raise the number of building permits allowed in town for a single housing development. Because the council voted 4 to 4, and the mayor wasn’t there as a tiebreaker, the housing permit limit remains at 50 per year, per project.

The Summit Crossing housing development, which is planned for a property on U.S. 11 across from the Food Lion shopping center, has been in the works since the Planning Commission approved it in 2004. Stalled by the Great Recession beginning in 2007, the project received special government protection to preserve it for a few more years.

The three-phase project includes plans for 111 townhouses and 141 single-family homes. After months of discussion and a vote in October not to approve the plans, council members approved the plans this month in a 7 to 1 vote, with Councilman John Massoud voting in opposition.

Concerns over the project included the possibility of water runoff that could cause flooding downtown.

Though the town is seeking a smart meter system to help stabilize monthly water bills, residents have argued that a new water meter system will not fix the town’s policy of charging sewer fees whenever customers use water, regardless of whether the water enters the sewer system. Residents took their complaints to the council during several work sessions this fall, with town resident Nathan Jordan and several council members recalling how they received unexpectedly high bills after watering their lawns or filling their swimming pools.

Town Manager Wyatt Pearson has resolved to better ensure the town cautions new residents of how their water bills work.

Two of the most visible projects in town this year are the Streetscape and Gateway Trail projects, which have been making improvements to King Street and Massanutten Street, which turns into Old Valley Pike (U.S. 11.)

Phase Two of the Streetscape project broke ground in July and is mostly complete. Work included new sidewalks along King Street, repaving of the road, installation of streetlights and new crosswalks at the intersection of King and Massanutten.

The Gateway Trail project is building a walking trail along U.S. 11, north from downtown to City National Bank.

The project hit a snag this month in dealing with stormwater issues where a rock wall along Massanutten Street abuts with the sidewalk, Pearson said at a Dec. 16 work session. The rock makes it tough to add a stormwater drain, but the town is working with the Virginia Department of Transportation to resolve the issue, he said.

Nearing the end of the year, the council saw some of its best-attended meetings when residents came out to speak in favor of a Second Amendment sanctuary.

Reacting to proposed gun control legislation that the General Assembly will consider in January, town residents urged the council to join other localities around Virginia in taking a symbolic stand against any infringement of residents’ Constitutional right to bear arms.

The council voted on Dec. 10 to adopt a resolution in favor of the Second Amendment. The resolution does not include the word “sanctuary.”

In January, the council will begin budget talks for the Fiscal Year 2020-2021 year.

Terndrup has urged residents to come out to work sessions and meetings to discuss their concerns with the council on any matter, including how to address the national problem of gun violence.

He hopes the new year will bring discussions on more events and activities around town, such as additional spring and fall events, a Fourth of July parade and a possible Yule Log for Christmas.

“Response to the Christmas parade was overwhelming,” he said. The town took over running the event from the Strasburg Chamber this year, and Terndrup said he is looking forward to “keeping that energy going.”

This was also the first year the downtown space at Strasburg Square was fully operational, and Terndrup pointed out that new downtown businesses, like Nancy’s Coffee Bar, which opened in April, are attracting more pedestrians and tourists.

“We had a lot of buzz downtown,” said Terndrup. “[It’s] so great to see people on a Tuesday and Wednesday night walking downtown and having a good time.”