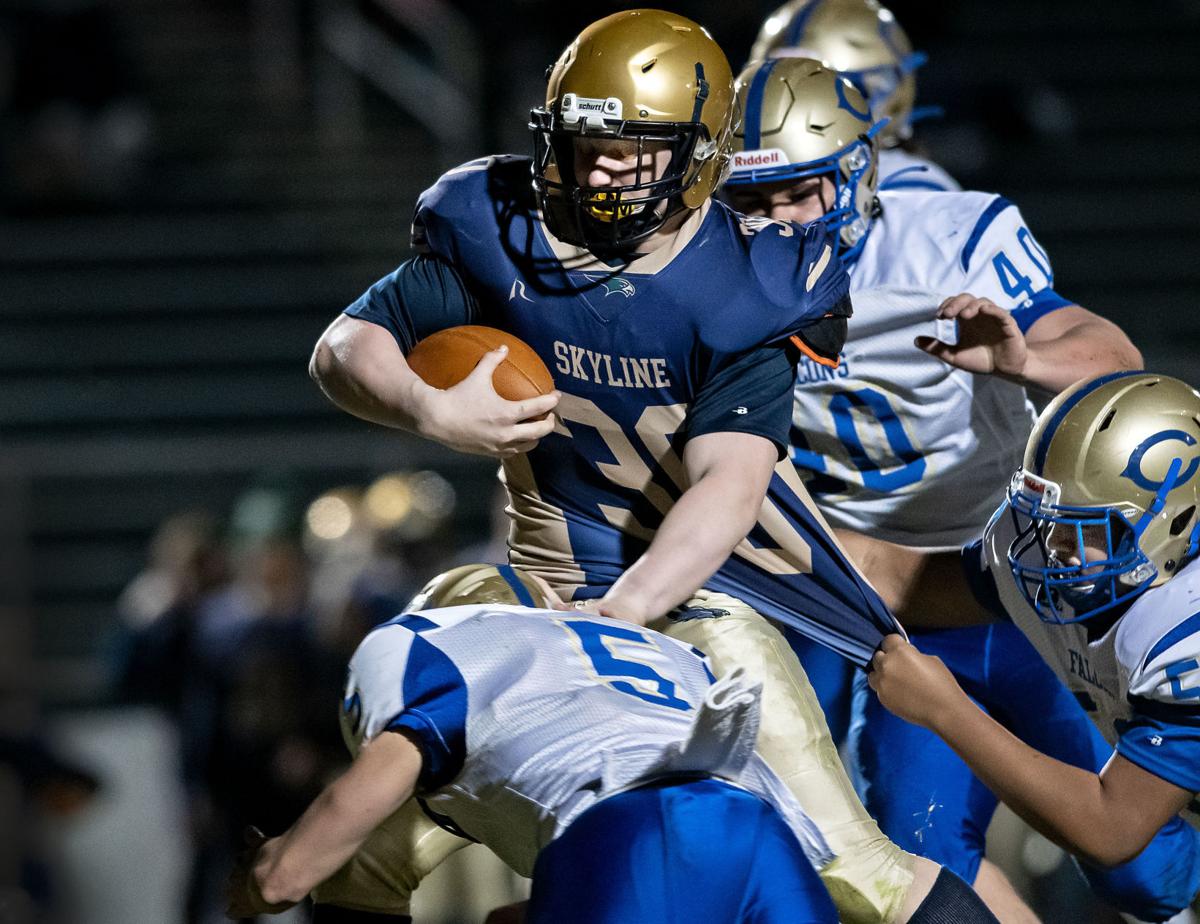 Skyline’s Dustin Gue gets hit by a trio of Central defenders during a football game last spring in Front Royal. 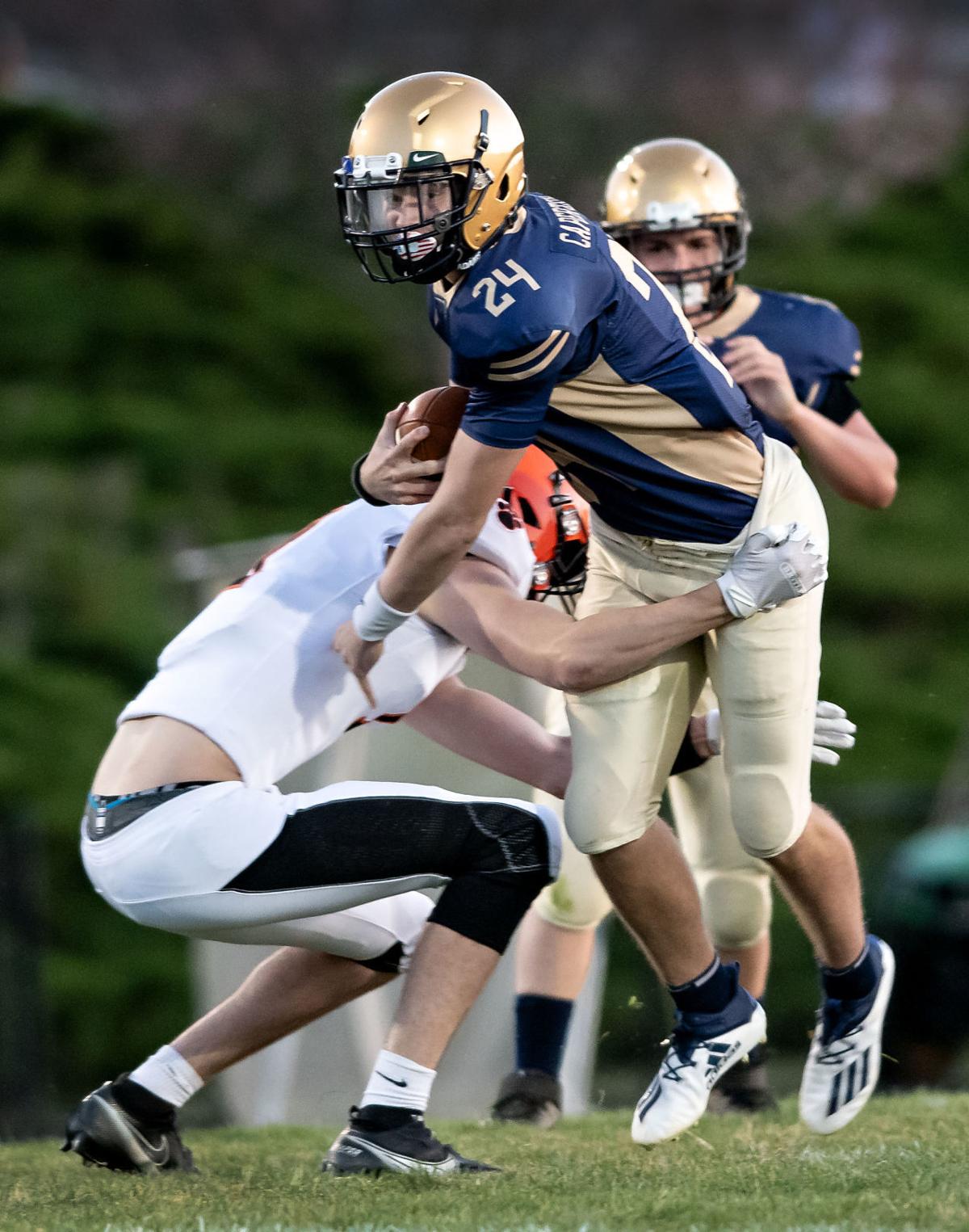 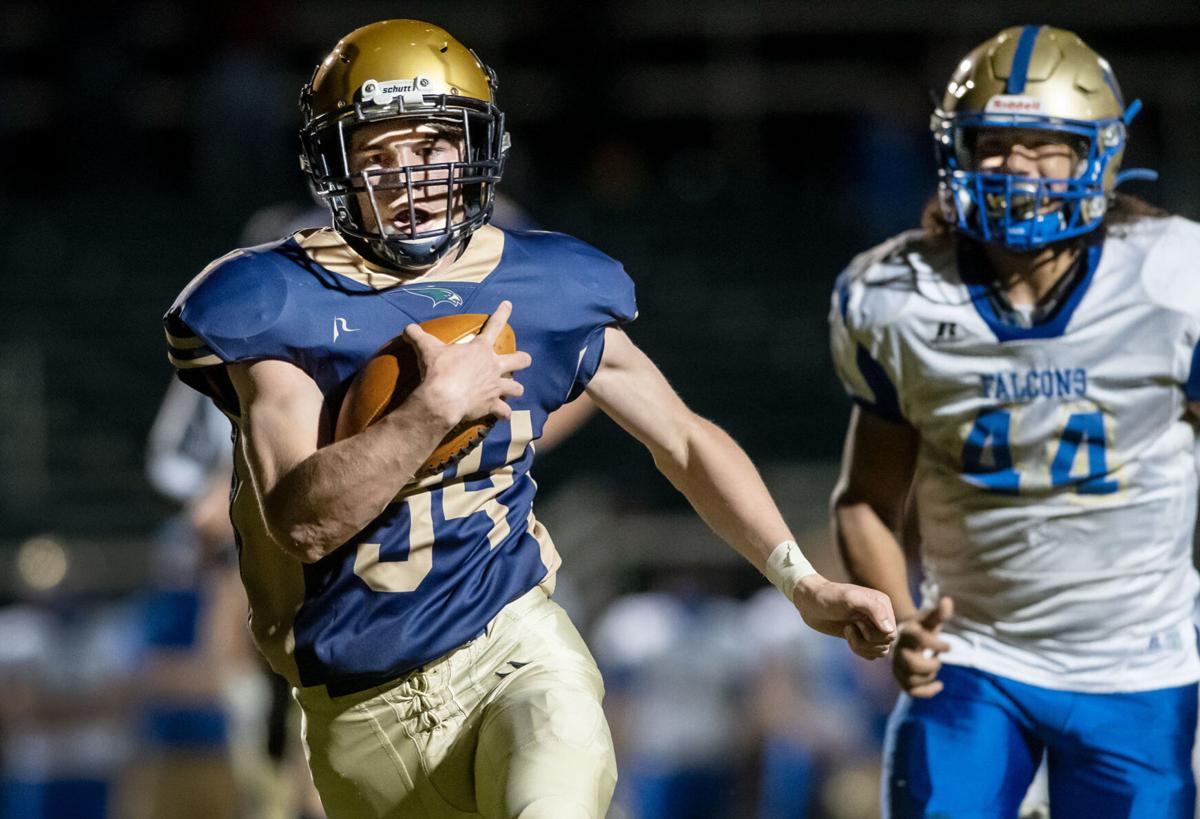 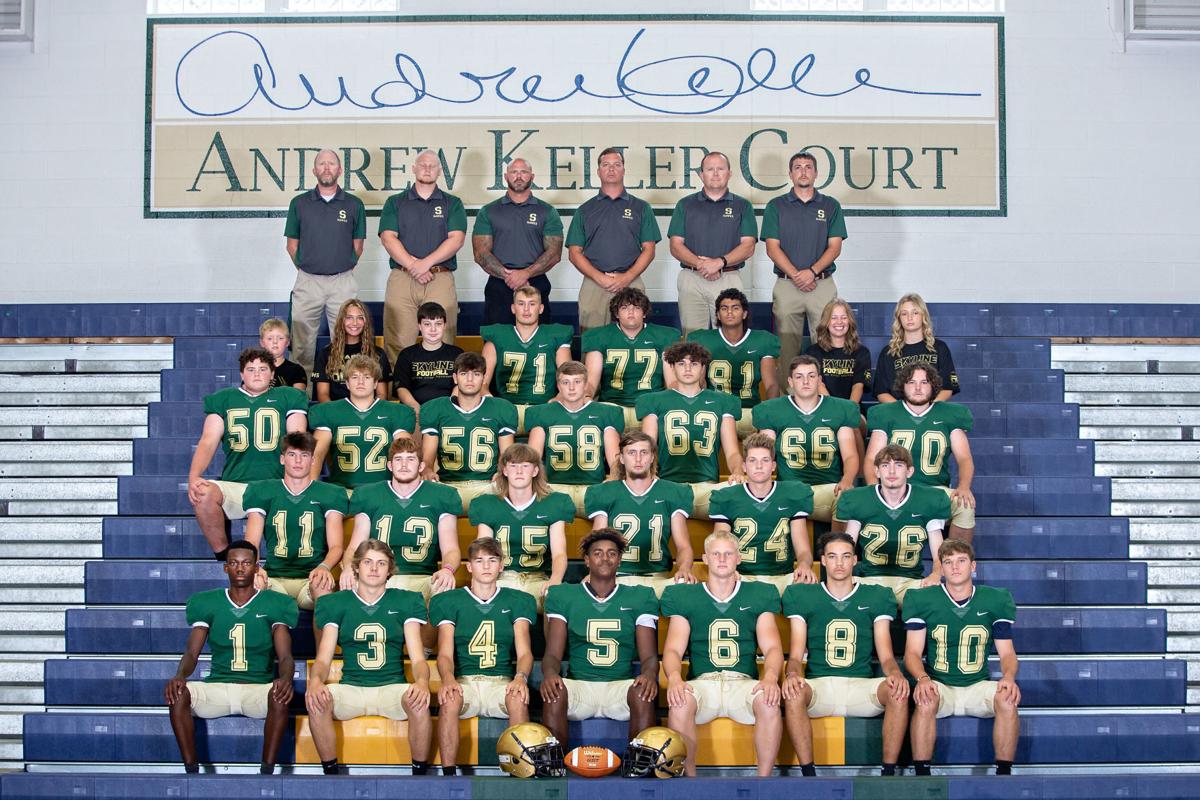 Skyline’s Dustin Gue gets hit by a trio of Central defenders during a football game last spring in Front Royal.

FRONT ROYAL — Skyline head football coach Heath Gilbert and his staff start each season preaching the importance of building and maintaining a positive culture within the program, one built on brotherhood and hard work that, ideally, paves the way for a winning season.

When that box is checked, the next goal is winning a district title. Despite the graduation of 15 seniors, most of them starters, from last season’s team, Gilbert thinks the Hawks have the potential to repeat as Class 3 Northwestern District champs this fall.

“If we can get some things settled down up front, get healthy (and) if I have all 27 guys that we have that can be healthy, we can compete for a district championship,” Gilbert said after practice last Wednesday. “We have enough athletic ability at the skill positions to do that, and we have enough toughness and size up front if we can learn our assignments.”

That final point remained Skyline’s biggest area of emphasis as it headed into its final preseason scrimmage last week before turning its sights on Friday’s opener at home against Strasburg.

“We can look the part. We can put an offensive line out there and be like, ‘OK, look at these boys.’ It’s just a matter of catching them up,” Gilbert said. “We have athleticism, we can move our feet, but if we’re not sure, our feet are slow, we look lethargic because you’re like (you’re) playing with your eyes closed almost because you don’t understand everything you’re doing right now. That’s the battle we’re fighting right now.”

The Hawks have also been battling injuries this preseason, and Gilbert noted that Mandiak had to be shut down in camp.

“Getting him back healthy is really important for us because of the snap consistency. We’ve been working a couple kids in there to try to hold it down, and when the snap is off, it gets crazy,” Gilbert said. “… If we can’t get things settled down, we might have to go under center, which will limit some of the stuff we do in our playbook, but we can’t afford just to have crazy snaps.”

Skyline no longer has the services of explosive weapons like receiver Marion “Budder” Haley, who has walked on at James Madison University, and running back Logan Maiatico, the district’s offensive player of the year last season, but Gilbert likes the potential that the Hawks’ new crop of playmakers have.

Senior quarterback Blake Appleton, who passed for 2,084 yards and 25 touchdowns in 2019, is back after missing last spring with a torn knee ligament and brings a much-needed blend of leadership, physical ability and smarts to the position.

His return has allowed senior Ethan Caperton, who played QB last year in Appleton’s absence, to move back to receiver, where Gilbert and Appleton both say Caperton is primed to put up big numbers after finally getting the chance to show what he can do at that position.

Joining Caperton in the receiving corps are Elias Carter, Elijah Cabness, Tyson Funk, Austin Dunlap and Dylan DeBarr, Gilbert said. In the backfield, junior Dustin Gue and sophomore Aidan Vaught will see the bulk of the carries. Gilbert said Gue, a 6-foot, 215-pound “stud”, will provide the same physicality at the position as the 240-pound Darion Santucci did.

Vaught, whom Gilbert described as “lightning coming off the edge,” had 426 all-purpose yards in seven games last spring. He’s Skyline’s leading returning rusher (170 yards) and receiver (132 yards) and was a second-team All-Region 3B kick returner as a freshman. He’ll inherit the do-everything role that Maiatico played last season and will catch passes in addition to carrying the ball, Gilbert said.

“We’ve got a lot of new guys coming in and filling big shoes,” Appleton said. “They’re all doing good with it. They’re all picking it up well. We’ve just got to stay with each other, and some of these kids that don’t know or some of the new kids, just focus on helping them out. As a team, we’ve got to be together. Our one goal, we know we want to win. One person can’t do that. It’s a team effort, so we’ve got to be all on the same page, whether it’s studying, watching film, helping another teammate, doing your job right. It all ties into winning football games.”

Defensively, Skyline is also young up front but was further ahead than the offense heading into last Thursday’s scrimmage, Gilbert said.

Gilbert noted that he’s been impressed with the technique and quick progression of a defensive line that lost, among others, Will Wolf, the region’s Defensive Player of the Year last spring. Schuman and Haskins bring some playing experience there, and Gilbert called the physically imposing Haskins a “monster” who has taken a step forward this year.

Joining that duo up front are Julian Marcey (senior; 6-4, 225), Clingerman and Jenkins. Waisley, Mohr, Caison-Mayberry and Doberer will also be pushing for playing time.

Skyline’s defense gets a little more experienced from there.

At linebacker, Gue is a returning starter who posted 23 tackles last spring and will be someone the Hawks lean on this fall, Gilbert said. He’s joined by Porter and Phillips, while Cabness and Marcus Lambert are in line for minutes at the outside backer spot.

Senior safety Brayden Poe, the Hawks’ leading tackler (32), is the man “in charge” of Skyline’s defense, Gilbert said, and will be tasked with getting everyone lined up properly. Dunlap (24 tackles last spring) brings versatility to the position and is a returning starter at cornerback alongside Caperton. Dunlap will play some linebacker in certain packages, Gilbert said.

Junior Brody Stephens will start at the other safety spot, Gilbert said, where Vaught, Kaden Rutledge and DeBarr will serve as backups. Carter, Funk and Sam Barber will provide depth at corner.

“We feel like we’ve got some pieces there,” Gilbert said of the defense. “We have the physical ability, it’s just a matter of understanding what you’re doing and experience.”

Senior Luke Winningham takes over the kicking duties this fall, while Caperton and Jenkins will handle the punting.

Last season, Skyline went 5-2 overall (5-1 in district play) and lost to Independence in the Region 3B semifinals.