Shenandoah University's 22 seniors pose on the Shentel Stadium turf after defeating ODAC champion Washington & Lee 14-6 on the Hornets' Senior Day last Saturday. The win capped a 7-3 season for SU, which hadn't won seven games since 2004, and a 5-0 home season for the first time since 2003. 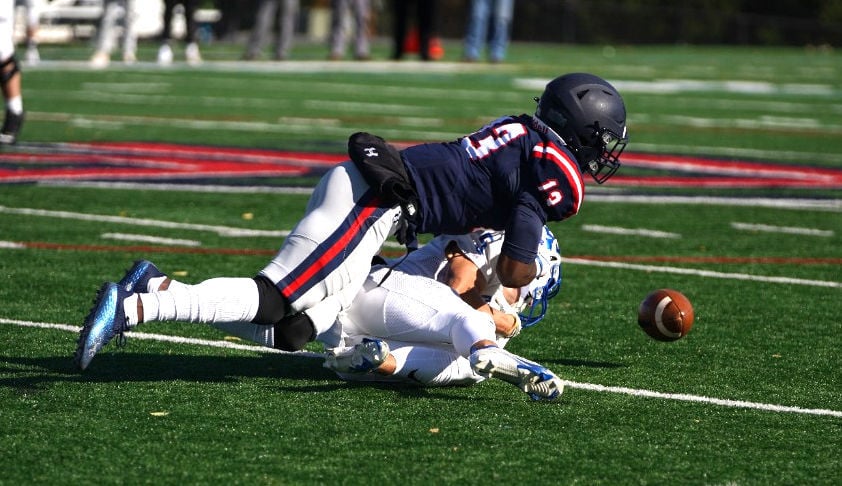 Shenandoah senior cornerback and Millbrook graduate Trammell Anthony (top) had 11 tackles and the game-clinching interception in the end zone in the final minute of last Saturday's 14-6 home win over Washington & Lee.

Shenandoah University's 22 seniors pose on the Shentel Stadium turf after defeating ODAC champion Washington & Lee 14-6 on the Hornets' Senior Day last Saturday. The win capped a 7-3 season for SU, which hadn't won seven games since 2004, and a 5-0 home season for the first time since 2003.

Shenandoah senior cornerback and Millbrook graduate Trammell Anthony (top) had 11 tackles and the game-clinching interception in the end zone in the final minute of last Saturday's 14-6 home win over Washington & Lee.

WINCHESTER — Shenandoah University head football coach Scott Yoder was on the road recruiting for the 2022 season on Wednesday, but the 2021 season was very much on his mind.

With a 7-3 record, the Hornets posted their most wins since 2004. It was a season to remember, and it wouldn't have been possible without the leadership and performances of the team's 22 seniors.

"We're going to miss them next fall, there's no doubt about it," said Yoder in a phone interview. "There are so many guys on defense, so many guys on offense that played such an integral part and had so many snaps.

"The attitude of our team was really positive. We didn't really get too high with wins and we didn't get too low with losses or when we didn't play as well. I think it has a lot to do with the 22 seniors who kind of set the tone. If we've got to make corrections, we've got to make corrections. And if we're playing well, here's what we've got to do to keep it well. I think we managed the ups and downs of the season better than we ever have, and I think it says a lot about them with their attitude in the locker room and with how they handle their business day-to-day."

This year's seniors didn't end their careers with a playoff berth (SU went 3-3 in the ODAC), but they left their mark. They helped SU go 5-0 at Shentel Stadium for the first time since 2003, beat an Emory & Henry team that is in its first year in NCAA Division II for the first time since 2017, and ended the year by defeating Old Dominion Athletic Conference champion Washington & Lee, winners of eight straight games. The Hornets had not defeated a team that finished the year as ODAC champion since Yoder's first year in 2013, when they beat Hampden-Sydney.

"We all worked so hard," said senior linebacker David Agyei inside SU's Aikens Athletic Center on Wednesday. "We all wanted the younger players to take over after that and put in the same amount of effort.

"You have to have a reason for everything that you're doing, and I really feel like this senior class really did that."

Senior linebacker Jahquan Collins said the seniors had a lot of faith in their abilities, and he was glad to see that show up more than ever this year.

"There's a lot of talent in our class," senior linebacker Jahquan Collins said. "That talent showed."

Though he didn't play this year due to injury, SU also honored Nick Rauchwarg, who Yoder said had a big impact as a leader after recording 15 catches for 275 yards and two TDs in the spring.

"He was around for every practice," said Yoder of Rauchwarg. "He was a student coach and did a great job helping out with the wide receivers."

Yoder said it was an all-around team effort that got the job done in Saturday's 14-6 win over Washington & Lee. It was another example of SU's sound, fundamental approach to the game. The Hornets ranked second nationally with just 3.1 penalties per game this year, and they had four for 25 yards on Saturday.

The Generals came into the game averaging 34.8 points and 323.7 rushing yards per game. W&L got its share of rushing yards (317) but couldn't put up the points. The Generals were 0 for 2 in the red zone and had two turnovers in the game.

"We played with an edge," said Agyei of the entire team. "When you're playing a team that won the conference, you want to prove something and show what you're really made of. We all played with a lot of fire and lot a of passion. Everybody just did their jobs to the best of their ability.

"Everybody wanted to leave with a boom. Honestly, we weren't backing down to anybody, and we just came out and hit them as hard as we could."

The victory was clinched by an interception in the end zone from Anthony, a Millbrook graduate. Anthony lamented with a smile on the sideline at the Emory & Henry game that he was the only member of SU's starting secondary without an interception this season, but he certainly made his first one memorable by leaping to pick off the pass thrown from the SU 11 in the final minute.

Yoder said everything that Anthony did prior to that interception already made it one of the finest performances of his career. The cornerback had 11 tackles.

"The way they were running the football, things were bouncing out to the edge guys, and those tackles were huge," Yoder said.

At the end of Wednesday's phone conversation, Yoder asked his interviewer if he could ask Agyei and Collins if they could come back next year. Because the NCAA granted fall athletes from the 2020-21 school year an extra year of eligibility, the duo is among the many who can do so if they choose.

The good news for SU is that the Hornets will definitely have the other senior starter from that impressive linebacking trio back.

In an email, Burgan's mother Kristy said Ben will take advantage of that COVID year and play for SU in 2022. Burgan led all NCAA Division III players with 135 tackles this season, led in tackles per game with 13.5 and tied for the solo tackle lead with 74. Burgan had 20 tackles on Saturday to break SU's school record for a season of 126 set by Michael Messick in 2015.

"Ben is just so productive," Yoder said. "There are going to be times where you have splash games, but he's been rock solid the whole time. To lead the country in tackles week in and week out and lead it at end of the year is pretty special."

On Saturday, Byrd Jr. tied the career-rushing TDs record of 29 set by Anthony Frates from 2002-05 with his six-yard score in the third quarter that made it 14-6.

"Byrd was a good freshman and he contributed every year," Yoder said. "You were a four-year player and you had such an impact, I think that's pretty awesome."

Byrd got to run behind an offensive line that will bring back three of its five starters (all sophomores) next year. The Hornets were particularly effective with pass blocking this year, only allowing eight sacks.

"We're certainly going to miss Matt Allen and Zach, two guys that kind of gave us an edge and our leadership up there," Yoder said. "But I think we're going to certainly keep developing the O-line and we're excited about the future. I think [assistant coach] Nick Oakley did a really good job with them this year."

They'll continue to block for a quarterback who made a lot of progress this year. Freshman Steven Hugney admitted he tried to do more than he needed at times. But during a week where he was a question mark because of a severely cut index finger on his right throwing hand suffered the previous week against Apprentice, he guided SU by completing 23 of 33 passes for 198 yards and a TD against one of the ODAC's best defenses while taking three sacks.

Overall, Hugney completed 143 of 251 passes for 1,637 yards and ranked third in the ODAC with 13 TD passes against 11 interceptions this season.

"He's such a great team-attitude guy," Yoder said. "It was like that with everybody. The defense, the offense. Now can he develop as a decision-maker within our offense? We're excited with him. This is the first time we have a quarterback coming back with legitimate experience, probably since Hayden [Bauserman, in 2018]."

The victory was not only big for the seniors, but it should do a great deal for the confidence of Hugney and the rest of SU's returning players. Unless more people choose to go Burgan's route, SU will have to replace more than half its starters.

"Not enough is talked about in college football in ending with a win, and what that means not just for your group that's finishing, but how that carries into the offseason, and how that motivates the younger guys," Yoder said. "Certainly beating the ODAC champ, we're not going to take that lightly at all."