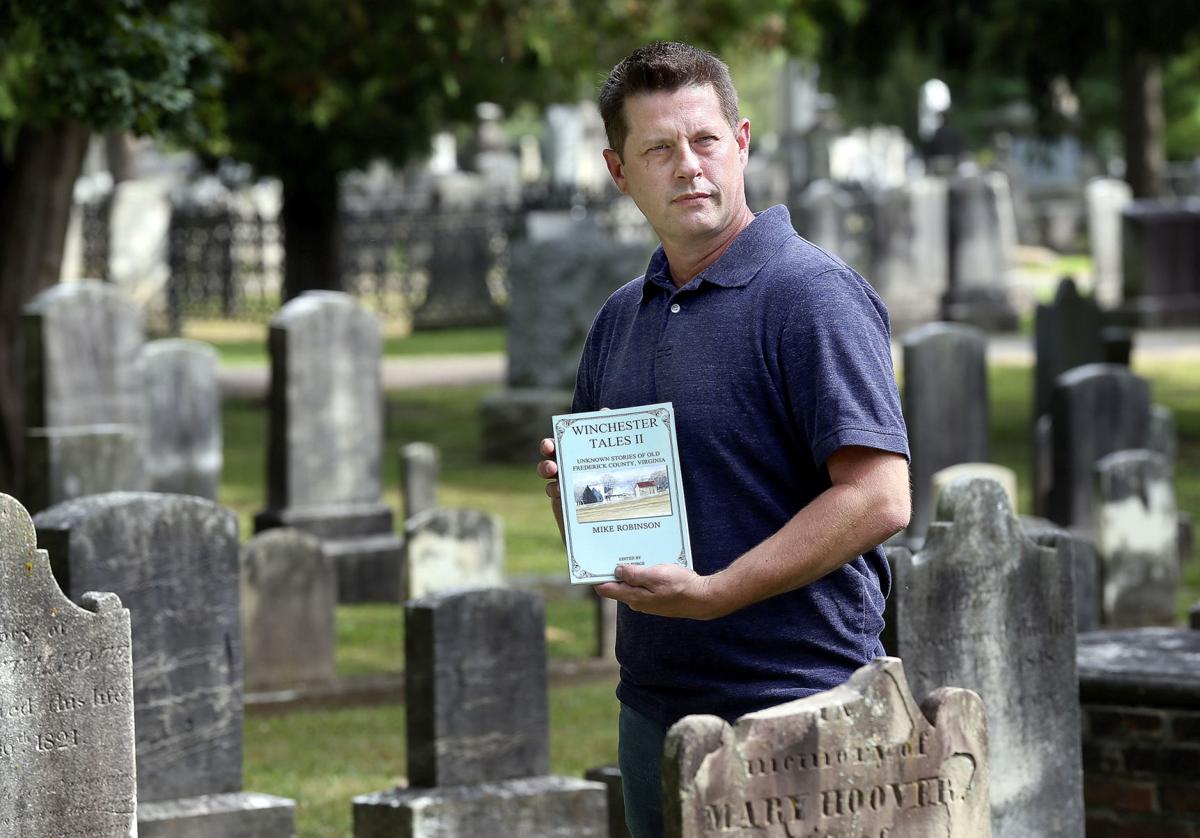 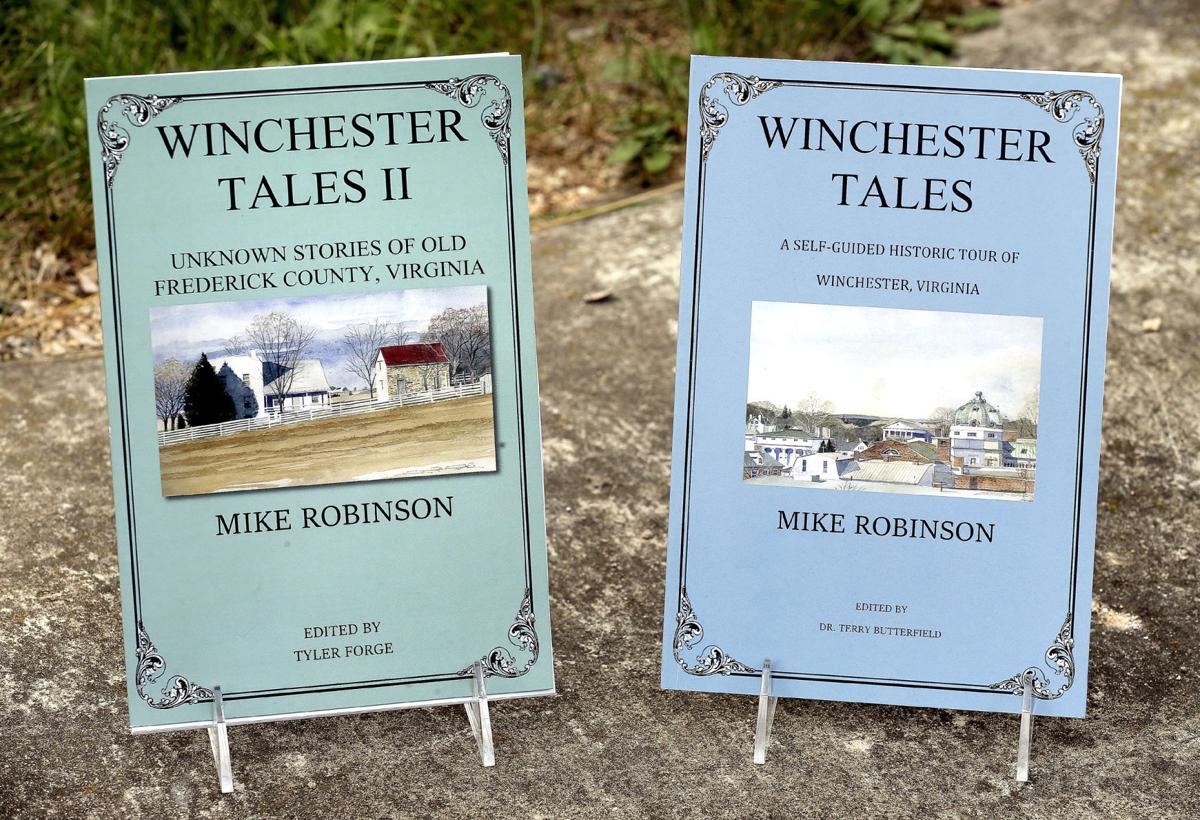 Wherever Mike Robinson learned to tell a story, there’s no doubt that he’s successfully taken his love of history, his writing ability and his social marketing savvy to create a large online community of local history lovers who like the way he tells a tale.

Robinson, 50, is the creator of the Winchester Tales Facebook page, a group he started in January after receiving a strong response to a post he did about the death of Revolutionary War Gen. Daniel Morgan on another Facebook page.

Within three months, Winchester Tales had 5,000 members. The group now has 7,000 members and is growing. Robinson estimates he’s researched and written 300 to 400 stories for the page.

As if starting a Facebook page isn’t enough of a challenge in chaotic 2020, Robinson has taken those short stories and compiled them into two books. The first volume is “Winchester Tales” and takes readers on a self-guided tour of the city. The second book is “Winchester Tales II,” which includes unknown stories of old Frederick County. Each book cover features a watercolor by local artist Eugene B. Smith.

Robinson will kick off the sale of his books with a launch party from 4 to 7 p.m. Sunday at the Wine Room at the Taylor Pavilion (behind Macado’s on the Loudoun Street Mall). The books were printed at Winchester Printers with the financial support of Patti and John Solenberger, owners of Solenberger’s Hardware on Berryville Avenue and avid history buffs.

Did you know that actress Susan Sarandon worked the ticket booth in 1968 at the now-closed Wayside Theater in Middletown? Or that Johnny Cash performed at Watermelon Park in Clarke County in 1963? Or that Eleanor Roosevelt traveled from the White House to the Winchester hospital in 1939 to pick up her son after he’d been in a car accident?

Members of the Winchester Tales group know those stories because Robinson shared them to his Facebook page.

“It’s been a labor of love to write these stories,” he said. “History belongs to all of us.”

But the road to becoming the area’s new chronicler of old stories was not a straight path.

After graduating from James Wood and then trying a few college classes, Robinson moved to California, where he tried his luck as an actor in Hollywood.

He made the rounds of auditions and even appeared in a couple pilots, but when acting didn’t pay off he started working behind the camera. He worked at Nickelodeon on such children’s classics as “Dora the Explorer” and then went to Paramount Pictures to be an assistant to executive Sherry Lansing.

“That was where I learned to spin a yarn,” he said of his Hollywood days.

Sitting in pitch meetings listening to screenwriters and producers trying to sell their ideas, Robinson realized that it was the short and sweet pitches that often got the greenlight. “The ones that went on and on never got picked up,” he said. “People don’t want drawn-out history. I give them four paragraphs.”

When his mother got sick, Robinson returned to Frederick County. But it was the area’s history that made him want to stay.

“It took me until I was 35 years old to realize that I really wanted to live here again,” said Robinson, who went on to earn a history degree from Shepherd University after he returned to the Shenandoah Valley. “It really is a special place.”

Hollywood may have fine-tuned his technique, but Robinson said it was his mother who got him interested in history. When he was a boy she would take him to battlefields and museums, to courthouses and cemeteries. And her enthusiasm and the way she would explain things stays with him, even now that she’s gone.

“She was my first tour guide,” he said. “She made it fun. She really was the reason I fell in love with history.”

Even though he has a full-time job in the plastic-packaging business, two young children and a fiancee, Robinson thought he could squeeze in a new project. Keeping up with a Facebook page focused on history shouldn’t take too much time, he thought.

Turns out, it takes a lot of time to regularly add fresh content to the page. But it’s time well spent, he said, since he gets so many positive comments on his posts. Winchester Tales members like to add their insights about what they remember about an event or a person or if they had ever heard their parents or grandparents talk about the subject.

That’s OK. Robinson is happy to change the entry after he does more research on his own. He’s not interested in repeating tall tales or folklore that can’t be supported with facts. He credits the staff of the Stewart Bell Jr. Archives in Handley Library with helping him track down reliable sources and for allowing him to use so many photos in his books.

“I use a lot of old, old books that a lot of people don’t know about and don’t read,” he said of his research methods.

The Winchester Tales page, he said, captures what Facebook was initially designed to do — bring people together. Robinson said he doesn’t have to monitor negative comments or worry that things will get political. Most of his group members realize people were doing the best they could at the time they were alive.

Because he’s had such a positive response with Winchester Tales, Robinson recently started a new Facebook page — American Tales.

The Winchester Tales volumes are $12.50 a piece or both for $20 and will be available at Sunday's launch party. After the party, the books can be purchased at Solenberger’s Tru Value Hardware, 832 Berryville Ave, Winchester.