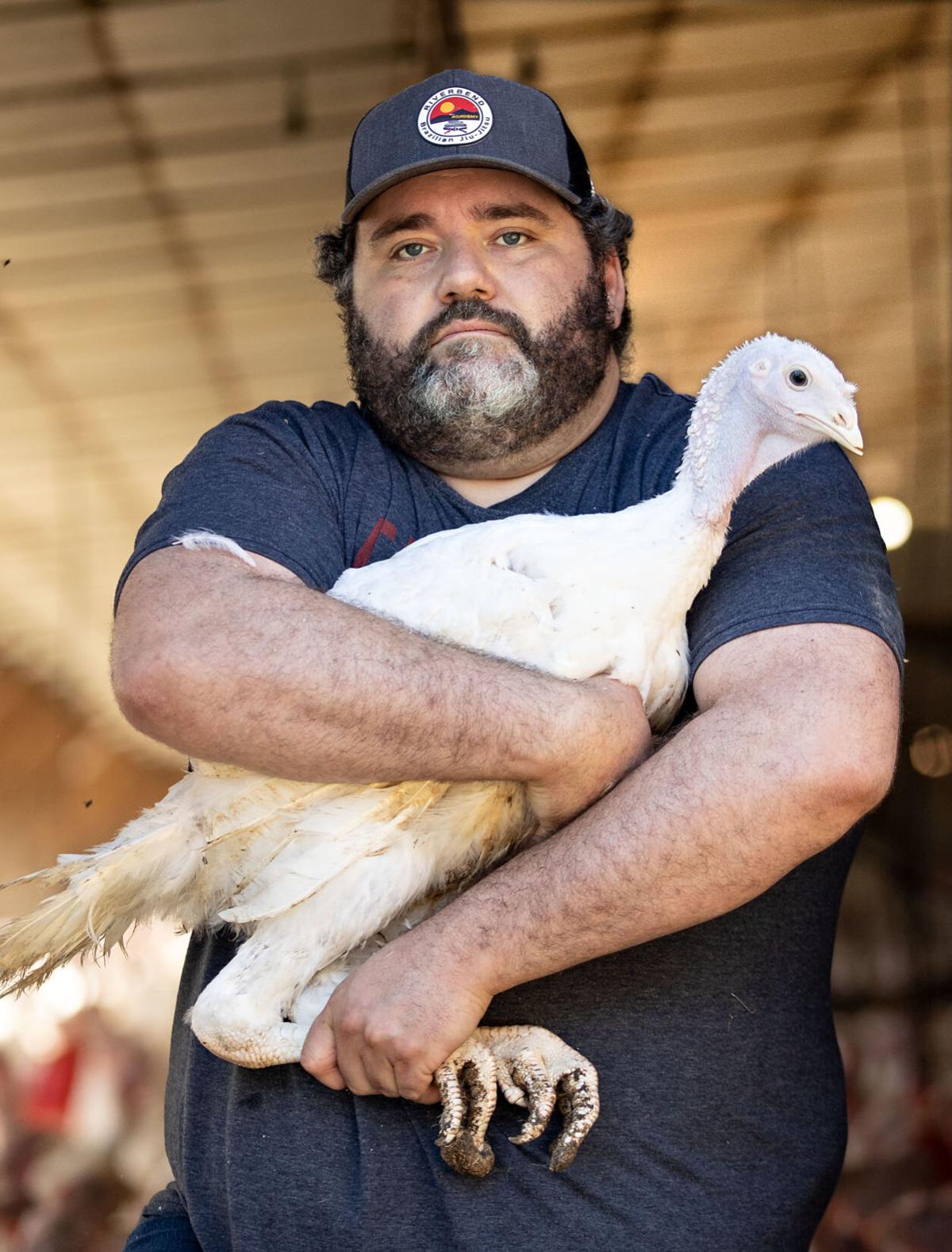 Robert Hupman, 35, of Bentonville holds this 14-week-old Tom turkey at his turkey house in Bentonville in Warren County. Hupman has two barns that are the home to 19,000 turkeys. There, he raises the birds from the time they are 5 weeks old until they are finished at 19-20 weeks. 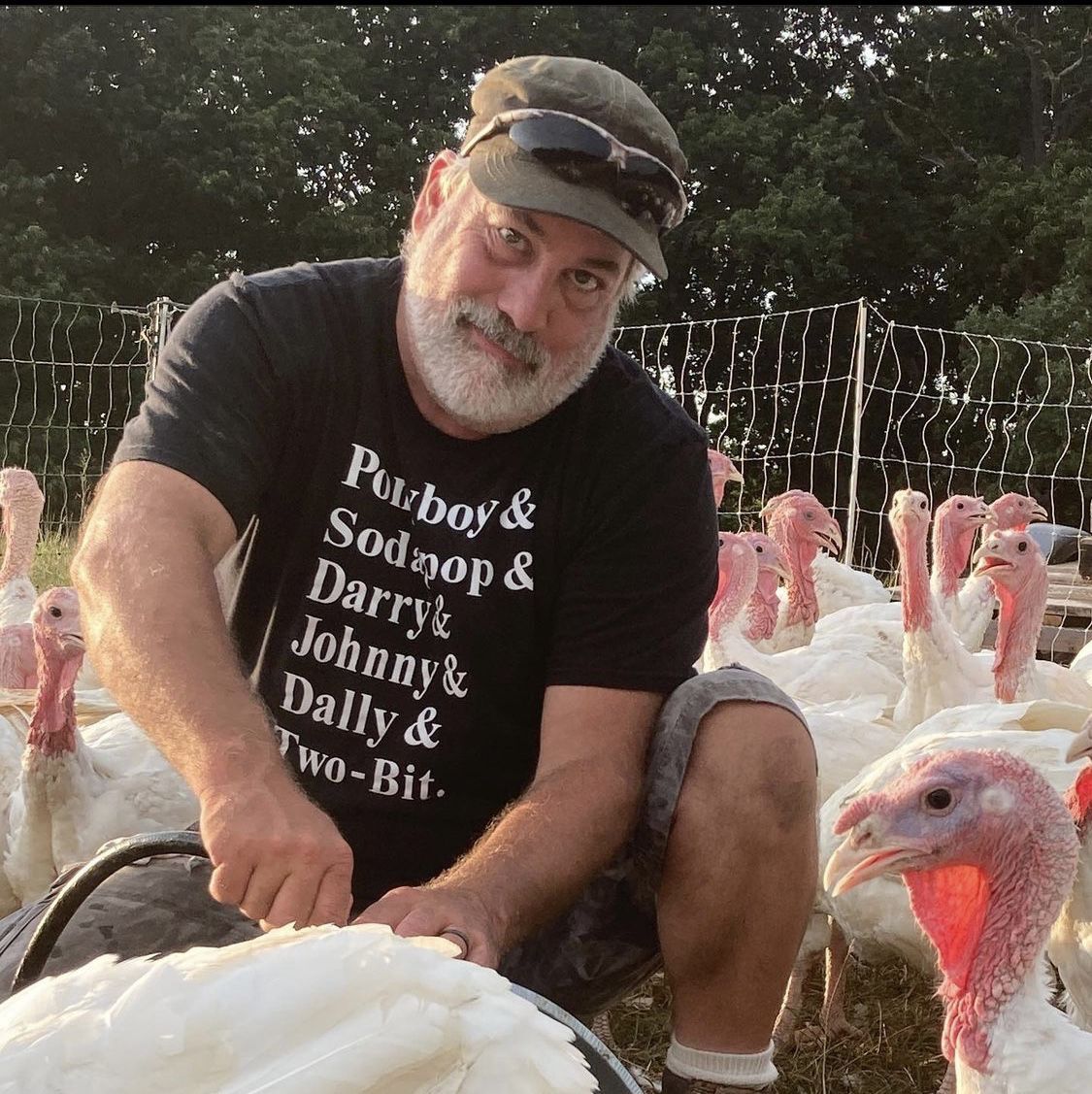 Skyview Acres owner Greg Mauzy tends to turkeys at the farm he owns with his wife at 2737 Senseny Road in Frederick County. 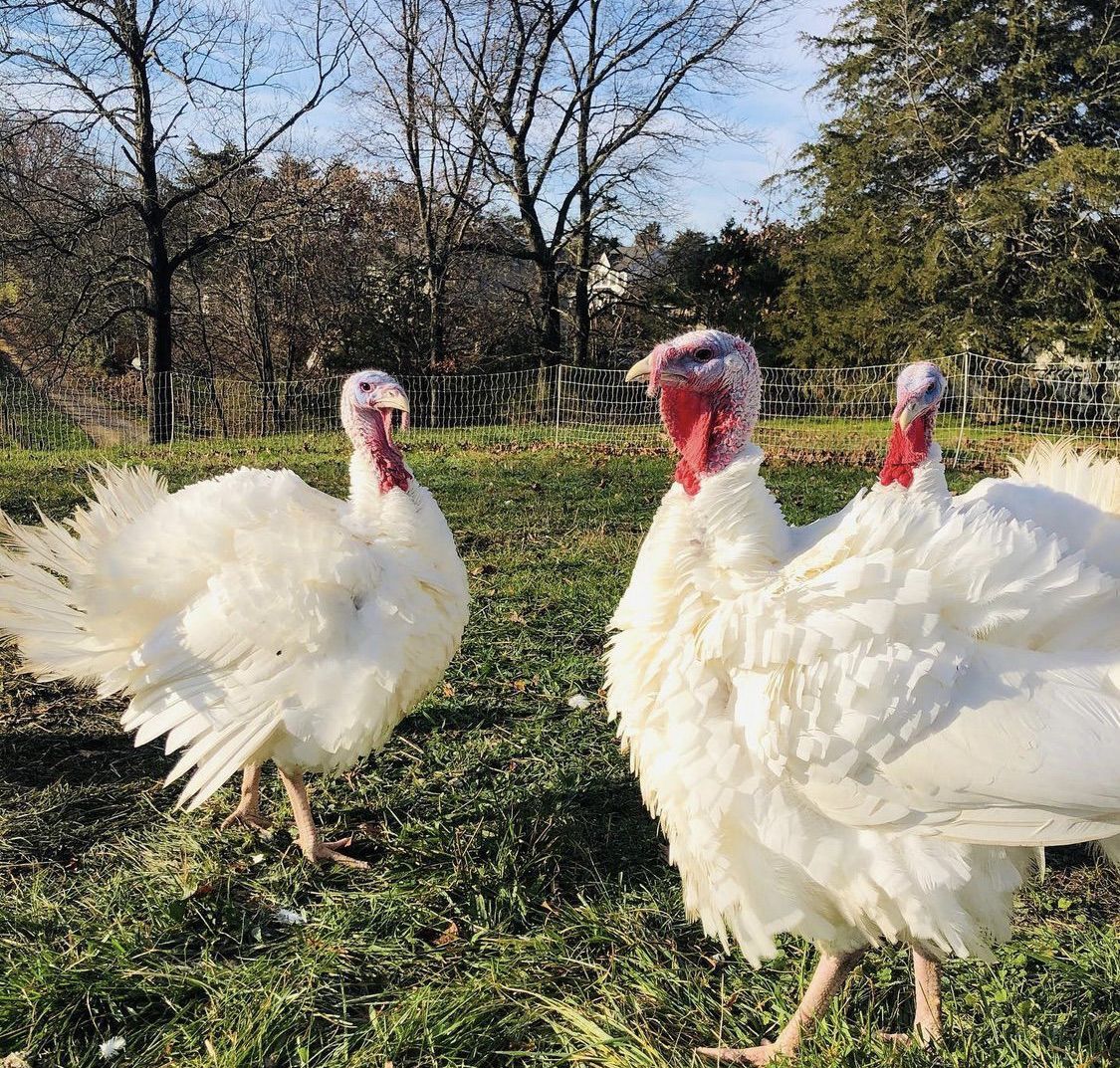 Robert Hupman, 35, of Bentonville holds this 14-week-old Tom turkey at his turkey house in Bentonville in Warren County. Hupman has two barns that are the home to 19,000 turkeys. There, he raises the birds from the time they are 5 weeks old until they are finished at 19-20 weeks.

Skyview Acres owner Greg Mauzy tends to turkeys at the farm he owns with his wife at 2737 Senseny Road in Frederick County.

Turkey farmers like him are bountiful throughout the Commonwealth, with the Virginia Farm Bureau reporting that there are more than 275 turkey farms in Virginia.

Although Rockingham County is considered the “poultry capital of Virginia” by Virginia Poultry Federation President Hobey Bauhan, the northern Shenandoah Valley helps contribute to Virginia ranking sixth in the nation in turkey production, according to the National Agricultural Statistics Service.

Hupman has been operating Hazard Mill Farms since he was 22 years old. He raised about 19,000 turkeys this year.

On a smaller scale, Sharon Mauzy and her husband, Greg, raised about 100 turkeys at Skyview Acres in Frederick County this year.

There’s a place for both large and small operations, Hupman said, and they all help make Virginia and the Shenandoah Valley among the nation’s most ideal turkey producers.

The processes they use are similar.

Hupman has two farms that raise turkeys using different methods. One farm does the process from start to finish, acquiring the birds the day they hatch and raising them until it’s time to butcher.

“You’ll raise them through the starter phase, which is around five weeks,” Hupman said. “Then, you’ll move them to the finishing phase and clean up for new poults.”

The other method is a “finish only” process, where Hupman gets the birds from a hub farm at 5 weeks old and he completes the raising process.

They’re butchered at 19 weeks at about 40 to 45 pounds, he said. They’re kept on 80,000 square feet with two barns that the turkeys call home while they’re on the farm.

Mauzy’s turkeys are raised free range in an area protected by an electric poultry fence. Typically, a livestock guardian dog serves as watch dog. It takes about four to five months to raise the turkeys to butcher weight.

The Mauzys raise and process the turkeys themselves, including all of the butchering. A special USDA exemption allows small farmers to process and butcher a certain amount of poultry per year.

No matter how many turkeys there are, they like to eat.

Hupman said one flock of his turkeys will eat about 2 million to 2.5 million pounds of feed, which consists of soy bean, corn and sometimes wheat. Mauzy said her 100 turkeys eat over 50 pounds of non-GMO feed a day.

“I think turkeys are more apt to be mischievous, which is a funny thing to say,” she said. “I think the biggest difference between raising turkeys and chickens from chicks is that turkeys are much more delicate. They die a lot easier when they’re younger, so you have to be really careful raising them and making sure they’re in the right temperature inside the brooder.”

Chicks stay under heat lamps to help imitate being close to their mother, while turkeys need to be under the heat lamps a lot longer and at a higher temperature than chickens do.

She also said turkeys like to graze, and they love grasshoppers. She said she finds turkeys do much better at grazing and looking for insects than chickens. Turkeys are much better foragers, she said.

And the profit is much higher on turkeys.

Hupman said he would have to raise double the number of chickens to make the same profit he brings in from turkeys.

Hupman’s birds are sold exclusively to commercial companies. He said the turkeys that folks buy for Thanksgiving dinner that come from his farm — usually medium Tom turkeys — are killed around September.

Mauzy said she and her husband typically do most of their butchering the weekend before Thanksgiving for those who want fresh turkeys. This year, though, their situation was a little different, which led to a bit of roller-coaster ride. They had a commercial customer who was going to buy 100 turkeys, then only wanted 25, then backed out completely, so the Mauzys put out the word on Facebook that they needed to sell some live turkeys.

Mauzy said she was contacted by a local woman who ordered 20 birds to donate to a local food bank. An hour later the woman said she would buy the rest of the birds.

All of the turkeys from Skyview Acres ended up being donated to the Christ Church Food Pantry in Millwood as a result. The pantry will donate the turkeys to people and share the rest with other food banks in the area, she said.

“It was really great, and it helped us out of a difficult financial situation. It was a huge blessing to us, and it made us happy to do something like that in providing for our community,” Mauzy said. “Most of what we do is retail to the public, but this year it just kind of worked out that we did it this way.”

Craig Miller, who is a member of Rockingham County Farm Bureau, said the average American eats 16 pounds of turkey each year and that turkey is eaten and sold year-round, with many Virginia-raised birds sold in Virginia and others transported across the country and overseas.